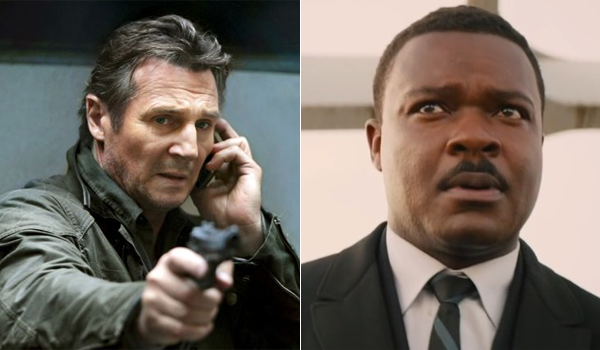 Sunday Update: Fox's Taken 3 led the box office with ease this weekend with an estimated debut of $40.4 million. The third installment of the Liam Neeson led franchise outpaced pre-release expectations; marking the third time that the Taken franchise has exceeded expectations. Taken 3 hadn't been expected to open anywhere near as strong as 2012's Taken 2, but instead opened a reasonable 18 percent below the $49.51 million debut of Taken 2. Without adjusting for ticket price inflation, Taken 3 delivered the second largest opening weekend ever for the month of January (behind only the $41.52 million take of last year's Ride Along). The film's debut was especially impressive given that so many holdovers came back down to earth this weekend; due in part to the end of the holiday season and due in part to the strong performance of Taken 3.

Taken 3 opened with $14.8 million on Friday (which included an estimated $1.6 million from late night shows on Thursday), increased 5 percent on Saturday to take in $15.6 million and is estimated to decline 36 percent on Sunday to gross $10.0 million. That places the film's estimated opening weekend to Friday ratio at 2.73 to 1. Taken 3 received a solid B+ rating on CinemaScore. It is possible that Taken 3 could take a significant hit next weekend from the nationwide expansion of Warner's highly anticipated American Sniper.

Paramount's Selma placed in a distant second with an estimated $11.2 million. While Taken 3 outpaced expectations this weekend, Selma debuted below expectations, which were ultimately inflated due in part to the film's exceptional critical reviews and a larger than originally anticipated location count this weekend. While the Ava DuVernay directed awards season hopeful didn't light the box office on fire this weekend, the film could still hold up extremely well going forward thanks in part to strong word of mouth (the film received an exceptional A+ rating on CinemaScore) and continued awards season buzz. It is also very possible that many initial moviegoers are waiting until the Martin Luther King holiday weekend next weekend to see the film. With that said, that Selma debuted 54.5 percent below the $24.64 million start of 2013's Lee Daniels' The Butler is certainly underwhelming. Selma has grossed $13.49 million to date.

Selma grossed $3.78 million on Friday, increased a healthy 24 percent on Saturday to gross $4.7 million and is estimated to decline 42 percent on Sunday to gross $2.72 million. That gives the film an estimated weekend to Friday ratio of 2.96 to 1. It should be noted that the reported production budget for Selma was a modest $20 million.

Holdovers occupied positions three through six this weekend with the four films fairly bunched together with one another. Disney's Into the Woods claimed third with an estimated $9.75 million. The Rob Marshall directed musical featuring Meryl Streep was down a significant 48 percent. This weekend's hold was lackluster given that the film expanded into an additional 295 locations. Into the Woods surpassed the $100 million mark this weekend and has grossed $105.27 million in 18 days. That places the film 6 percent behind the $111.93 million 18-day take of 2012's Les Misérables.

Warner's The Hobbit: The Battle of the Five Armies followed closely behind in fourth place with an estimated $9.44 million. The third installment of Peter Jackson's The Hobbit trilogy was down a sharp 57 percent from last weekend. The Battle of the Five Armies has grossed $236.52 million through 26 days of release and is now running just 2 percent ahead of the $231.93 million 26-day gross of 2012's The Hobbit: The Desolation of Smaug.

Unbroken rounded out the weekend's top five with an estimated $8.37 million. The Angelina Jolie directed war drama from Universal fell 54 percent from last weekend. Like Into the Woods, Unbroken also surpassed the $100 million domestic milestone this weekend. Unbroken continues to exceed expectations with $101.60 million in 18 days. The film is running 8 percent ahead of the $94.09 million 18-day gross of 2008's The Curious Case of Benjamin Button.

The Imitation Game placed in sixth with an estimated $7.62 million. The awards season hopeful from The Weinstein Company held up much better than other films in the marketplace this weekend, as it was down just 2 percent. However, the film did expand into an additional 812 locations this weekend, so its location average did see significant slowing over the frame. The Imitation Game surpassed the $40 million mark this weekend and has grossed a promising $40.84 million to date.

Warner's Inherent Vice took in an estimated $2.9 million this weekend to place in eleventh among all films. The Paul Thomas Anderson directed film generated a respectable per-location average of $4,496 from 645 locations. The film performed on the higher end of expectations, which were subdued from the film's modest performance in platform release. Inherent Vice performed 34 percent softer than the $4.39 million take of 2012's The Master during its first weekend of major release (in 788 locations). Inherent Vice has grossed $4.48 million to date.

Saturday Update: Fox reports that Taken 3 grabbed $14.7 million on opening day, including Thursday night's $1.6 million start. The Liam Neeson action sequel was off 20 percent from Taken 2's $18.36 million opening day in October 2012, although these early numbers are still at a more-than-healthy level for the franchise entry. Unfortunately, critics haven't warmed to the film (giving it an 11 percent on Rotten Tomatoes), although early audience word of mouth is relatively stronger with a 73 percent Flixster score this morning (by comparison, The Equalizer was at 81 percent one day after release). It could be argued that franchise fatigue has set in for the series, but Fox's marketing team (alongside Neeson's drawing power) gave audiences enough reason to come back again with the promise of advancing the story by killing off a major supporting character to drive the plot . BoxOffice is projecting a solid opening weekend of $39.5 million.

Paramount's Selma expanded into wide release this weekend with $3.8 million from 2,179 theaters on Friday. The Martin Luther King, Jr. biopic had been performing well in limited release for the past two weeks on the heels of excellent reviews -- it current stands at 98 percent on Rotten Tomatoes. Selma's audience score is at a strong 87 percent this morning, indicating mainstream crowds are slowly but surely beginning to embrace the drama. CinemaScore was an "A+". With MLK Day to follow next week, and the film's timely nature following recent real world events, expect some back-loading that gives Selma an enduring run beyond this weekend. BoxOffice is projecting a $12 million weekend.

Unbroken added $2.6 million yesterday, boosting its total to $95.8 million as it approaches the $100 million domestic threshold (which it will cross by the end of this weekend). BoxOffice projects an $8.5 million frame.

The Hobbit: The Battle of the Five Armies fell out of first place for only the second day since its opening in December. The finale took in $2.47 million yesterday, giving it a 24-day total of $229.55 million. BoxOffice projects $9.5 million this weekend.

Into the Woods brought in $2.46 million on Friday, bringing its total up to $98 million. The Disney musical will cross $100 million domestically on Saturday. BoxOffice projects a $9.4 million weekend.

In its expansion to 1,566 theaters (nearly double its previous count), The Imitation Game continues to maintain strong momentum as it earned $2.15 million yesterday. The film's run is closely mirroring that of The King's Speech four years ago (both films were release by The Weinstein Company). To date, Imitation has tallied $35.4 million and should total $8 million this weekend.

Friday Update #2: Sources tell BoxOffice that Taken 3 is on pace for north of $35 million during its debut frame. That's a drop from the $49 million that Taken 2 posted, but its very healthy on its own terms. We expect overseas returns to make up for any domestic dip.

Selma should hit at least $15 million this weekend--a solid haul for the drama's wide expansion. The opening weekend is not as important for Selma because word of mouth will keep it alive for weeks to come.

Friday Update #1: Sources report that Taken 3 bowed to $1.6 million from early shows last night, a strong start for the Liam Neeson action sequel to lead off the weekend.

By comparison, Taken 2 earned $1.5 million from preview shows, as part of a $49.5 million weekend, back in October 2012. Taken 3's initial haul is also in line with last September's The Equalizer ($1.5 million Thursday night / $34.1 million weekend). Based on early results and strong online tracking, Taken 3 looks poised to top $30 million through Sunday.

Also opening this weekend in wide release is the critically acclaimed Selma, which took in a healthy $400,000 last night. The film started in limited release two weeks ago and has accumulated $2.2 million from just 22 theaters during that time. Selma currently boasts an impressive 99 percent Rotten Tomatoes score from 115 critics.