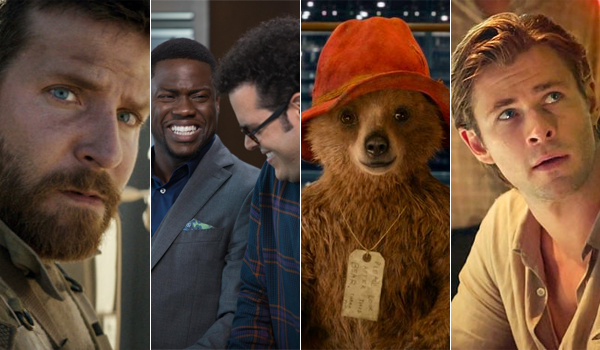 Warner's American Sniper took in an impressive $7.66 million on Thursday to lead the daily box office with ease for a seventh consecutive day. The Clint Eastwood directed Best Picture nominee starring Bradley Cooper was up 1 percent over Wednesday. American Sniper rocketed past expectations this week with a massive $132.35 million in its first week of wide release. That brings the film's total gross to $135.77 million. American Sniper is currently running 67 percent ahead of the $79.13 million seven-day take of 2013's Gravity. Given its strong holding power throughout the week, American Sniper is in great shape to experience a very strong hold over the weekend.

The Wedding Ringer held steady in second with $1.18 million. Sony's modestly budgeted comedy starring Kevin Hart and Josh Gad was up 2 percent over Wednesday's performance. The Wedding Ringer took second place for the week with a seven-day start of $28.08 million. That was on the lower end of pre-release expectations and places the film 9 percent behind the $30.75 million seven-day take of last year's About Last Night. The Wedding Ringer has been displaying stronger holding power than About Last Night so far and is very likely to continue to do so going forward.

Fox's Taken 3 grossed $0.757 million to remain in third place. The third installment of the Liam Neeson led franchise up 5 percent from Wednesday, but still down a sharp 57 percent from last Thursday. Taken 3 placed in fourth for the week with $19.66 million and has grossed $68.45 million in two weeks of release. That places the film a reasonable 26 percent behind the $92.57 million two-week take of 2012's Taken 2.

Selma continued to claim fourth place with $0.708 million. The Best Picture nominee from Paramount was up an impressive 17 percent over Wednesday and down 37 percent from last Thursday. Selma held up very nicely this week with a fifth place take of $16.06 million. That represented a 4 percent increase over the previous week and brings the film's current domestic total to a promising $33.72 million.

Fellow Weinstein Company release Paddington placed in sixth with $0.603 million. The well received family film increased 6 percent over Wednesday. For the week, Paddington finished just behind The Wedding Ringer to take third place for the frame with a seven-day start of $27.67 million. Paddington is performing in line with expectations and is running 1 percent behind the $27.96 million seven-day take of last year's The Nut Job.

Meanwhile, Universal's Blackhat rounded out its first week of release with a tenth place take of $0.282 million. The Michael Mann directed film starring Chris Hemsworth grossed a very disappointing $5.43 million in its first seven days. Blackhat landed all the way down in eleventh for the week and will obviously fade away from theatres quickly.