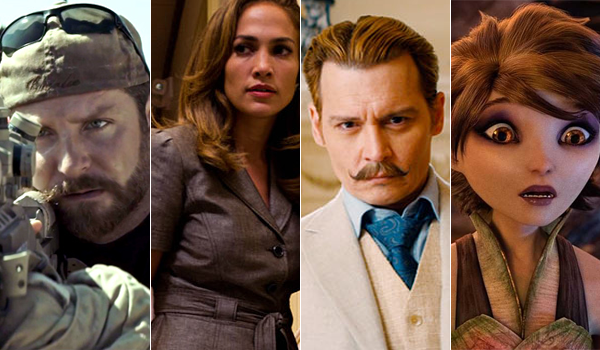 Warner's American Sniper took in $4.18 million on Monday to continue to lead the daily box office with ease. The blockbuster Clint Eastwood directed film starring Bradley Cooper was down 76 percent from Sunday and down 77 percent from last Monday's inflated Martin Luther King Day performance. American Sniper has grossed a massive $204.58 million after eleven days of wide release. That places the film an extremely impressive 59 percent ahead of the $128.52 million eleven-day take of 2013's Gravity. Given the magnitude of its grosses and its continued strong holding power, American Sniper looks like it will have no problem remaining in first place over the upcoming weekend.

The Boy Next Door claimed second place with $0.820 million. The Jennifer Lopez led thriller from Universal was down 76 percent from Sunday. The Boy Next Door has grossed $15.73 million in four days, which is towards the higher end of pre-release expectations and represents a good start, especially with the film's low production budget in mind. The Boy Next Door is running 21 percent ahead of the $13.05 million four-day take of 2010's The Back-Up Plan.

Sony's The Wedding Ringer placed in third with $0.684 million. The modestly budgeted comedy starring Kevin Hart and Josh Gad was down 76 percent from Sunday and down 80 percent from last Monday. The Wedding Ringer surpassed the $40 million mark yesterday and has grossed $40.07 million in eleven days. The film is currently running 3 percent ahead of the $38.84 million eleven-day take of last year's About Last Night.

Paddington took fourth place with $0.527 million. The well received family film from The Weinstein Company was down 86 percent from Sunday and down a very sharp 92 percent from last Monday's holiday inflated take. Paddington also surpassed the $40 million mark yesterday and has grossed $40.46 million in eleven days. That places the film just below the $40.67 million eleven-day take of last year's The Nut Job.

Fellow Weinstein Company release The Imitation Game rounded out Monday's top five with $0.485 million. The Best Picture nominee starring Benedict Cumberbatch was down 72 percent from Sunday and down 60 percent from last Monday. The Imitation Game continues to display strong holding power and has grossed a healthy $60.94 million to date.

Lionsgate's Mortdecai and Disney's Strange Magic continued their poor starts with respective eighth place and tenth place grosses of $0.274 million and $0.222 million. Strange Magic has only managed $5.73 million in four days, while the four-day start for Mortdecai stands at an even softer $4.47 million.  Both films will obviously disappear from theatres quickly.