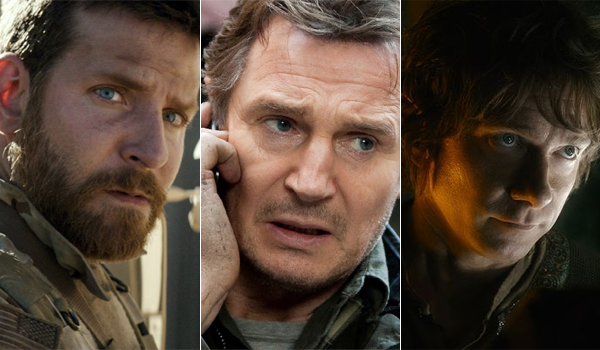 Sniper, though considered a 2014 release for yearly gross purposes thanks to its Christmas launch in four New York/Los Angeles/Dallas theaters, represented a staggering 24 percent of the month's haul with $242 million scored between January 1-31. That's easily the biggest January performance since Avatar tallied $312 million in January 2010, representing 29.5 percent of that month's overall box office. As is well reported by this point, the blockbuster film based on veteran Chris Kyle's autobiography set numerous records in its wide expansion when it bowed to $89.3 million over the 3-day portion of Martin Luther King, Jr. Weekend -- more than doubling the previous MLK and January records set by last year's Ride Along.

The Clint Eastwood-helmed picture has continued to ride a wave of unexpected momentum since expanding into wide release one day after Bradley Cooper and the film itself became Oscar nominees (Best Actor and Best Picture). As a result, recently-crowned 2014 box office champion The Hunger Games: Mockingjay - Part 1 ($335 million), which unseated Guardians of the Galaxy ($333 million) a few weeks ago, could be usurped by Sniper in the weeks ahead. Having crossed the $250 million threshold on February 2, the film is well on track to become 2014's top domestic box office earner -- even though 99 percent of its money has been earned in 2015. Welcome to Hollywood accounting.

Coming in a distant second place was an actual January release: Taken 3. Liam Neeson's third outing showed some franchise fatigue, as expected, when it opened to $39.2 million (20 percent below its predecessor). Still, its debut was above most expectations heading into release. All in all, the three-quel's had a solid run and will eventually close out in the ballpark of Neeson's Non-Stop, which earned just over $92 million domestically last year.

Unfortunately, the rest of the month was generally blasé. Paddington benefited from strong word of mouth and reviews as the sixth-best grosser of the month, followed closely by Kevin Hart's The Wedding Ringer. The only other January releases to earn over $10 million were The Woman In Black 2 and The Boy Next Door, but even those were overshot by numerous December releases that played well after the holidays.

Peter Jackson's Hobbit finale took third place for the month with almost $62 million, followed by Disney's Into the Woods and Universal's Angelina Jolie-helmed Unbroken rounding out the top five. The Imitation Game also figured into the month's standout performers thanks to positive word of mouth and awards buzz -- particularly for leading man and first-time Oscar nominee Benedict Cumberbatch.

Looking ahead, 2015 may continue its upswing from recent winter markets. February 2014 posted a modest $700.2 million, a figure that should be within reach thanks to Sniper's continued legs and the anticipated releases of February 13's Fifty Shades of Grey and Kingsman: The Secret Service, among others. Could 2012's record $818 million February be up for grabs?