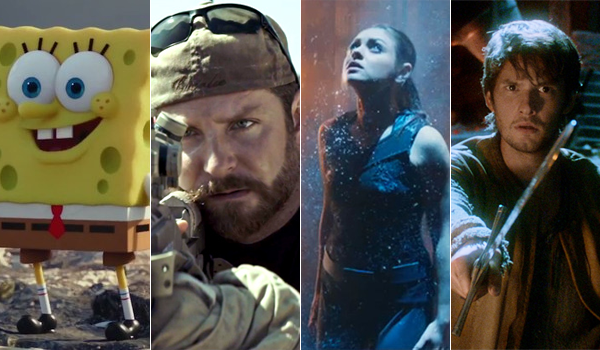 The SpongeBob Movie: Sponge Out of Water opened with $15.02 million on Friday, increased a healthy 62 percent on Saturday to gross $24.31 million and is estimated to decline 31 percent on Sunday to take in $16.68 million. That places the film's estimated opening weekend to Friday ratio at 3.73 to 1. That was noticeably stronger than the 3.35 to 1 ratio of The SpongeBob SquarePants Movie. The film did receive a so-so B rating on CinemaScore, though younger moviegoers under the age of 18 (who made of 50 percent of the film's audience) did give the film an A- score. With no real competition for family audiences throughout the month of February, The SpongeBob Movie: Sponge Out of Water should be able to hold up much better going forward than The SpongeBob SquarePants Movie did back in 2004.

After leading the box office for the past three weeks, Warner's American Sniper fell to second place this weekend with an estimated $24.17 million. The blockbuster Clint Eastwood directed film starring Bradley Cooper was down just 21 percent from last weekend's performance, which was obviously deflated by the Super Bowl. This weekend's hold for American Sniper was especially impressive given that the film lost its IMAX screens to Jupiter Ascending and Seventh Son. American Sniper has grossed a massive $282.27 million after 24 days of wide release. That ranks the film as the third highest grossing release of 2014 thus far domestically and leaves the film just $17.73 million away from reaching the $300 million domestic milestone.

Fellow Warner Bros. release Jupiter Ascending debuted in third place with an estimated $19.0 million. The expensive 3D sci-fi film from The Wachowskis starring Channing Tatum and Mila Kunis debuted towards the lower end of already relatively modest expectations. Jupiter Ascending was originally scheduled to open last July, but pushing the film back to February ultimately made little difference at the box office and likely even hurt the film's potential a bit. The opening weekend performance of Jupiter Ascending was quite similar to the $18.56 million start of 2008's Speed Racer.

Jupiter Ascending opened with $6.39 million on Friday (which included an estimated $1.0 million from evening shows on Tuesday), increased 19 percent on Saturday to take in $7.63 million and is estimated to decline 35 percent on Sunday to gross $4.98 million. That gives the film an estimated opening weekend to Friday ratio of 2.97 to 1. Jupiter Ascending received a lackluster B- rating on CinemaScore and is likely to be significantly front-loaded due in part to fans of The Wachowskis rushing out on opening weekend. The audience breakdown for Jupiter Ascending skewed heavily towards moviegoers over the age of 25 (82 percent) and towards male moviegoers (57 percent). The film grossed $2.18 million from IMAX locations, which represented 11.5 percent of the film's overall gross. 3D grosses made up 52 percent of the film's overall gross.

While Jupiter Ascending at least had a presence at the box office this weekend, Universal's Seventh Son didn't. The pricey and long delayed fantasy film (which was originally to be released by Warner Bros.) stumbled out of the gate with an estimated fourth place debut of $7.1 million. Seventh Son debuted on the low end of expectations and represents yet another early 2015 release that audiences simply had no interest in (joining the likes of Blackhat, Mortdecai and Strange Magic). It should be noted that Seventh Son has had much more of a box office presence overseas.

Seventh Son opened with $2.3 million on Friday, increased 30 percent on Saturday to gross $3.0 million and is estimated to fall 40 percent on Sunday to gross $1.8 million. That places the film's estimated opening weekend to Friday ratio at 3.09 to 1. Like Jupiter Ascending, Seventh Son also received a lackluster B- rating on CinemaScore. The audience breakdown for the film skewed towards moviegoers over the age of 25 (68 percent) and towards male moviegoers (61 percent). Seventh Son grossed $0.67 million from IMAX locations, which represented 9.4 percent of the film's overall gross.

Paddington rounded out the weekend's top five with an estimated $5.37 million. The well received family film from The Weinstein Company was down 35 percent from last weekend, which represented a very solid hold, especially given the stronger than expected launch of The SpongeBob Movie: Sponge Out of Water. Paddington has grossed $57.27 million through 24 days of release.

Project Almanac followed closely behind in sixth place with an estimated $5.33 million. The low budget sci-fi thriller from Paramount was down just 36 percent from last weekend. Despite the nice second weekend hold, Project Almanac is still performing below pre-release expectations with a ten-day start of $15.76 million.

Saturday Update: Paramount reports this morning that The SpongeBob Movie: Sponge Out of Water opened to a stellar $15.1 million on Friday, easily claiming first place. The sequel blew past its 2004 predecessor's (The SpongeBob Squarepants Movie) $9.6 million first day, even topping the $12.8 million inflation-adjusted opening day figure of that film. Given the '04 movie's relatively short legs for a kiddie flick (it earned $85.4 million in all after a $32.0 million opening weekend), it makes Sponge Out of Water's debut all the more surprising. Its opening day also ranks as the second best ever for an "animated" film in February, only behind last year's The LEGO Movie ($17.1 million).

Entering the weekend, industry expectations had SpongeBob pegged for a debut in the mid-30s range, while social media activity didn't indicate significant buzz until the final days before release. The sequel's CinemaScore registered as a "B", although Paramount notes that 50 percent of the audience was under the age of 18 -- that portion gave it an "A-." Meanwhile, critics have given it a solid 74 percent Rotten Tomatoes score while that site's audience vote is an equally solid 78 percent. BoxOffice is projecting a $53 million opening weekend, which would put it in the all-time top five February debuts as well as the top three (led only by The Passion of the Christ and LEGO) in February without the aid of a holiday.

Debuting in second place yesterday was the Wachowskis' Jupiter Ascending as it rang up $6.4 million. While that handily tops the $3.4 million first day of Cloud Atlas back in 2012, it unfortunately is a slow start for the expensive film rumored to have a production budget around $175 million. With a "B-" CinemaScore, poor critical reviews, and a flurry of competition in the market, the film will need to rely on overseas success to recoup expenses. BoxOffice is projecting a $17.8 million weekend.

American Sniper continued to show strong staying power as it eased 37 percent from last Friday to $6.3 million yesterday. With $264.4 million in the bank so far, the film is pacing 42 percent ahead of Gravity and 3 percent behind The Passion of the Christ. BoxOffice projects a $25 million frame.

Seventh Son's first day pulled $2.3 million, well behind the $3.4 million opening day of last year's Pompeii. The oft-delayed release of the fantasy film was a sure sign of an under-performer long in advance, and unfortunately, early reviews and word of mouth don't indicate much will change. BoxOffice is projecting a $6.6 million opening frame.

Project Almanac filled out the top five on Friday as it was off 53 percent from last week to $1.49 million. With $11.9 million grossed in all so far, BoxOffice projects a $5.0 million sophomore weekend.

Meanwhile, The Imitation Game eased 21 percent from last Friday to $1.27 million. The Oscar nominee crossed the $70 million threshold and now has $71.1 million in the bank. BoxOffice projects a $4.9 million frame.

Friday Update #2: Based on early reports, BoxOffice projects that The SpongeBob Movie: Sponge Out of Water should end up with between $37 million-$39 million during its debut frame, which is more than enough to end American Sniper's run in first place. Sniper is headed for a low-20s haul this weekend.

Jupiter Ascending and Seventh Son are off to weak starts. Jupiter looks to be on pace for $18 million-$19 million, but it could end up with even less considering that early word of mouth is toxic. Seventh Son is looking at $7 million-$7.5 million.

Friday Update #1: Warner Bros. reports that Jupiter Ascending took in an estimated $1.0 million from Thursday night's opening shows. The latest film from the Wachowskis opens in IMAX and 3D theaters this weekend, and while last night's figure appears to be a decent start, some front-loading could be expected given the filmmakers' cult-like appeal following 2012's Cloud Atlas. By comparison, Oblivion earned $1.1 million from early shows as part of a $37.1 million weekend, while Edge of Tomorrow scored $1.8 million from Thursday shows in a $28.8 million Friday-Sunday frame last summer.

Also opening this weekend, and expected to challenge American Sniper's hold on first place, is Paramount's The SpongeBob Movie: Sponge Out of Water.