NORTH AMERICA: 'Fifty Shades of Grey' on the Verge of Reaching the $100M Mark after Leading Tuesday with $5.49M; 'Kingsman' Takes Second with $3.28M 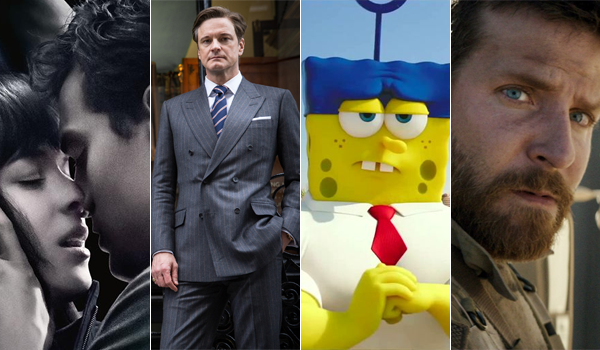 Universal's Fifty Shades of Grey took in $5.49 million to claim first place at the daily box office on Tuesday. After leading the daily box office during its first three days, the highly anticipated erotic romantic drama had fallen to second place on Presidents Day. Fifty Shades of Grey was down 30 percent from Monday, which represented one of the day's stronger daily percentage holds among wide releases. The film has grossed an impressive $98.49 million in just five days and is set to surpass the $100 million mark today. Fifty Shades of Grey is currently running 50 percent ahead of the $65.82 million five-day start of 2010's Valentine's Day.

Fox's Kingsman: The Secret Service was up one spot from Monday to place in second on Tuesday with $3.28 million. The Matthew Vaughn directed graphic novel adaptation starring Colin Firth was down 41 percent from Monday. Kingsman continues to exceed expectations with a five-day start of $45.04 million. That places the film 97 percent ahead of the $22.88 million five-day take of 2010's Kick-Ass.

The SpongeBob Movie: Sponge Out of Water was down two spots from Monday to land in third with $2.74 million. The successful 3D animated film from Paramount was down 68 percent from Monday and up 20 percent over last Tuesday, thanks in part to some schools being out on break this week. The SpongeBob Movie continues to perform stronger than expected with $105.88 million in twelve days.

Warner's American Sniper took fourth place with $1.28 million. The Clint Eastwood directed blockbuster starring Bradley Cooper was down 46 percent from Monday and down 28 percent from last Tuesday. American Sniper is currently the third highest grossing release of 2014 domestically with $307.76 million after 33 days of wide release.

Fellow Warner Bros. release Jupiter Ascending rounded out Tuesday's top five with $0.807 million. The expensive 3D sci-fi film from The Wachowskis was down 46 percent from Monday and down a sizable 47 percent from last Tuesday. The twelve-day total for Jupiter Ascending stands at a very disappointing, but largely expected, $34.68 million.