Mobile Tech Takes Over the Multiplex

Mobile devices and start-up culture are changing the business of online ticketing in the United States.

It's not just about beating the rush to the box office anymore. The way we buy movie tickets has been transformed by the rising popularity of smartphones, tablets, and other portable electronics. The online ticketing business has changed so much that it would be better referred to as mobile ticketing, reflecting the shifting focus of consumer behavior. Online ticketing companies Fandango and MovieTickets.com are evolving right alongside these new trends, and are now joined by upstarts who are staking claim to different segments of the business. These companies may use differing approaches and strategies in their pursuit of a portion of the ticketing market, but all of them appear to be taking notes from Silicon Valley.

DealFlicks is one of those start-up success stories. "I went to see The King's Speech but the theater was empty, and I wondered if there was a way to sell that back inventory and have theaters make extra money and consumers get a good deal out of it," says DealFlicks co-founder and CEO Sean Wycliffe. DealFlicks was launched in 2012 as a web portal offering discount movie tickets at partner theaters. Audiences can search for a movie theater in their area and select an available title and showtime without having to enroll in any sort of membership program. Mobile tickets or print-at-home vouchers are redeemable at participating cinemas, and the service has quickly grown since its launch. DealFlicks is available at around 500 locations in the U.S. and has established partnerships with 13 of the top 15 exhibitors in the country. "We evolved to become a platform where [exhibitors] can choose the level of discount that they would want to explore," explains Wycliffe. This means exhibitors have the flexibility to include the discount level they'd like for a specific showtime and the ability to bundle concessions into a voucher.

Mobile has become crucial to the company's business model, according to Wycliffe, because "a lot of the decision making of people purchasing through DealFlicks happens at the last minute." The DealFlicks mobile apps help consumers nab discounts whenever they feel like catching a movie. "Mobile has been making up a bigger and bigger percentage of our business. It accounts for about half of our transactions on a monthly basis, and it has been growing every single month."

Paul Yanover, President of Fandango, is vocal about the strong presence that mobile occupies in today's market. Fandango's mobile apps, offering ticketing to 25,000 screens in the U.S., have already registered more than 45 million downloads. "Fandango now sells more than half of our movie tickets on mobile, and the mobile consumption of our video trailers and original series has increased significantly," he explains. "Today's consumers are often making their moviegoing decisions on the go and buying and redeeming their tickets on mobile." MovieTickets.com is seeing a similar surge from consumers, reporting a 43 percent increase in total tickets sold via mobile in 2014 as compared to 2013.

Whereas DealFlicks can be compared to Priceline, MoviePass has been dubbed the "Netflix of movie theaters" for its all-you-can-see proposal with the relatively low price-tag of $30 to $35 a month, depending on the area. MoviePass acts as a subscription service for film enthusiasts, offering the ability to attend up to one screening a day for a monthly fee. The avid film fan is the ideal consumer to get the full value of the service; average attendance figures in the United States suggests the general population would underuse the benefits of membership.

MoviePass had a rocky start when it first launched in 2011, as major exhibitors and studios clashed with its proposed business model, but the company turned around the negative perception and announced its first partnership with a major U.S. exhibitor earlier this year. MoviePass and AMC agreed to launch a pilot program that seamlessly connects the service to the No. 2 exhibition chain in North America. The service will be available in Boston and Denver as a pilot program, with the possibility of expanding to other cities if the partnership proves successful. The partnership will allow members in Boston and Denver to attend up to one screening a day for $35 a month, and would allow cinephiles to opt in for a premium pass (which includes the IMAX and 3D screenings) for $45 a month. Stacy Spikes, CEO of MoviePass, views the premium offering as most appealing to the key 18- to 34-year-old demographic; a big part of the appeal is a new online ticketing feature. MoviePass has traditionally worked in tandem with a GPS-supported mobile app and physical card, but the AMC partnership will allow clients to access the theater by scanning their mobile phones or retrieving tickets by swiping their cards at the desired location.

Scanners are increasingly commonplace in movie theaters across the country, where ushers simply scan digital barcodes from a ticket printed at home or a consumer's mobile phone. This is a process that has worked particularly well at airports but might not be the best fit for movie theaters. The principal drawback of this system is the requirement that exhibitors invest in scanning equipment-not so much a problem for major airports, but a significant expense for regional circuits and community-based cinemas.

The future is likely to bring mobile ticketing solutions that do away with the bulky scanners. Fandango and MovieTickets.com are currently working on their respective scanner-free mobile tickets. "It's our key differentiator to all the other mobile experiences out there," says MovieTickets.com CEO Joel Cohen. MovieTickets.com partnered with New York City-based start-up Bytemark in bringing the V3 (visually verifiable virtual ticket) technology to cinemas. The V3 system involves secure delivery of a ticket to a user's mobile device. A theater employee would then visually validate the ticket by identifying a number of security features embedded into the digital ticket, allowing for a virtual "tear" option to act as the customer's digital ticket stub. Bytemark's V3 technology is already being used in several transit services across the U.S., and Cohen expects it to reach pilot locations very soon, while Yanover says Fandango will roll out its barcode-less ticket tests with exhibition partners in the next few months. "We expect the new mobile ticket to completely change the way tickets are redeemed," explains Cohen. "Comparing it to the popularity of print-at-home ticketing, this is much more efficient and comes at no cost to the theaters (unlike print-at-home). This solution is solid-it's great for consumers and theaters alike."

Overall, the online ticketing business is gaining more ground across the board. " It's definitely playing a bigger role in people's moviegoing experiences, and we expect mobile and online usage to accelerate with the greater number of highly-anticipated movies and major franchises this year," says Fandango's Paul Yanover. "In order to make the most of the excitement building for these upcoming releases, we have made Fandango available wherever consumers are thinking about movies, on our own multiple platforms, or on our partners' platforms, including Twitter, Google, Amazon/IMDb, AOL, MSN, Yahoo!, Apple (including iTunes, Siri and Passbook), Samsung,  Roku, and most recently, Hulu. We're working closely with exhibitors to launch new ticketing innovations, and with the studios on value-add programs for moviegoers such as gifts with purchase, bundling packages like SuperTickets, and high-end sweepstakes, all to drive more people into theaters."

"Consumer attitudes regarding mobile and online ticketing have never been stronger," agrees MovieTickets.com's Joel Cohen. "We added about 5,000 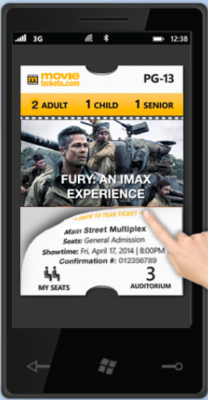 screens last year, which helped us, but mobile and greater adoption of reserved seating by the theaters are driving our business higher."

The increased presence of luxury and reserved seating in the United States has also opened up opportunities for DealFlicks, which is working on introducing dynamic and variable pricing based on reserved seating in late 2015/early 2016. This would allow DealFlicks customers to maximize their savings depending on the showtime and their desired seat. It is part of DealFlicks' focus on bringing back a sector of the population that feels priced out of the cinema. Some of their current online advertising geo-targets this specific demographic via an inventive strategy.

"We can hit people who are searching for specific movies, or we can even target people who are doing searches looking to pirate a movie," says Wycliffe. "Someone does a Google search on ‘The Hobbit' and ‘Watch Online Free,' for example, and we can target them and try to drag them back to the theater."

Targeting consumers is a key part of the mobile-ticketing business, and Fandango has invested strongly in recent years to ensure its brand is part of the conversation. Fandango acquired Movieclips, the leading provider of movie trailers and movie-related content on Youtube, in April 2014. It followed that up by launching its own movie-discovery channel on Hulu this year, providing another major platform for its various original video series. "We want to be wherever people are thinking about and discovering movies, as well as sharing their passion with others," explains Fandango's Paul Yanover. "That includes the newest smartphones, tablets and smart TVs, and on popular social-media platforms, which are some of the most powerful ways movie fans discover and share content and opinions about new films."

On-screen advertising specialists Spotlight Cinema Networks, a company that caters to art-house and independent cinemas in the U.S., also realizes the importance of having a presence wherever conversations about cinema are taking place. That is the driving force behind the creation of CineLife, an app designed for art-house theaters and their audiences that incorporates theater listings, showtimes, trailers, filmmaker appearances, and ticket purchasing among other features. "We are thrilled to bring an app to the art-house community that encapsulates the film enthusiasts' world and drives revenue, attracts new moviegoers, and increases repeat business for our exhibitor partners. It's a win-win," says Spotlight Cinema Networks CEO Gerald Rakfeldt.

International markets continue to perform well at the box office for Hollywood studios and have retained their allure for ticketing providers. MovieTickets.com has a presence in more than 20 countries and hasn't slowed down its interest in adding new territories. "We've done a good job maintaining our presence internationally, but there is an opportunity to expand, especially in Mexico and parts of South America," says MovieTickets.com's Joel Cohen. "We achieved a significant growth in screens domestically in 2014, and we'll grow substantially more in 2015-so we have tremendous momentum. Those gains allow us to bring some focus to the international markets as a part of our global strategy." DealFlicks also has an international expansion in its sights and is looking to reach screens in Canada and Latin America as early as this year.

Just as advances in consumer electronics changed the strategy and direction of traditional online ticketing services, future tech trends are likely to bring about a new set of emerging players. The diversity of competitors and options can only benefit consumers and exhibitors-making it easier for customers to secure movie tickets through a variety of portals.

The year 2015 promises to be a big one at the box office, but don't be surprised if the line for a sold-out show at your local theater seems shorter than it should. A lot of those folks might have bought their tickets well before setting foot in the cinema.