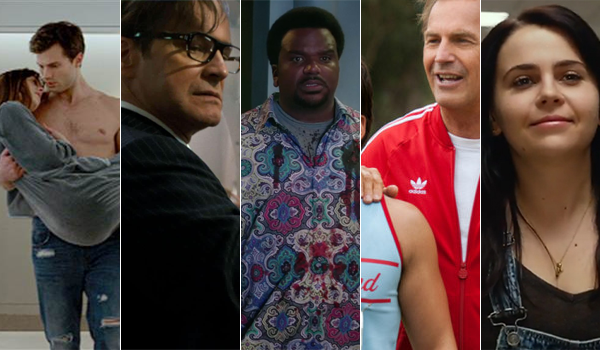 Universal's Fifty Shades of Grey held onto first place at the box office this weekend with $22.26 million. However, the successful romantic drama was down a massive 74 percent from last weekend's three-day debut. Initial front-loading driven by the film's pre-existing fanbase and Valentine's Day along with mixed word of mouth and poor critical reviews are all having an effect on the film. Fifty Shades of Grey held up well during the midweek, so it is likely the film will perform relatively stronger on weekdays than during the weekend going forward. In the bigger picture, Fifty Shades of Grey is still performing very well and continues to run towards the higher end of expectations with $129.16 million through ten days. That places the film a very impressive 49 percent ahead of the $86.93 million ten-day take of 2010's Valentine's Day (which fell 70 percent in its second weekend to gross $16.67 million).

Fox's Kingsman: The Secret Service took in $18.35 million to remain in second place. The Matthew Vaughn directed graphic novel adaptation starring Colin Firth was down 49 percent from last weekend. That represented a very respectable second weekend hold, especially with last weekend's debut having been inflated a bit by the dual-holiday weekend. Kingsman continues to exceed expectations with a healthy $67.93 million in its first ten days of release. The film is currently running 56 percent ahead of the $43.52 million ten-day gross of 2010's Red.

The SpongeBob Movie: Sponge Out of Water held steady in third with $16.57 million. That represented a 47 percent decline from the previous frame. While The SpongeBob Movie has been relatively front-loaded for a family film so far, the film continues to exceed expectations in a very big way with $126.25 million through 17 days. That places The SpongeBob Movie 37 percent ahead of the $92.34 million 17-day take of 2011's Rango. With no new family films entering the marketplace each of the next two weeks, The SpongeBob Movie could still stabilize going forward.

McFarland, USA opened with $3.63 million on Friday, increased 25 percent on Saturday to gross $4.55 million and declined 38 percent on Sunday to take in $2.84 million. That gave the film a promising opening weekend to Friday ratio of 3.03 to 1. McFarland, USA also received a promising A rating on CinemaScore. The audience breakdown for the film was evenly split between genders and skewed heavily towards moviegoers over the age of 25 (70 percent).

The DUFF followed closely behind in fifth place with $10.81 million. The PG-13 comedy from CBS Films and Lionsgate exceeded pre-release expectations and was helped out this weekend by relatively high levels of online buzz. The DUFF opened 21 percent stronger than the $8.93 million start of last year's That Awkward Moment.

The DUFF opened with $4.29 million on Friday, was down 1 percent on Saturday with $4.26 million and declined 47 percent on Sunday to gross $2.27 million. That placed the film's opening weekend to Friday ratio at 2.52 to 1. The audience breakdown for the film skewed heavily towards female moviegoers (75 percent) and moviegoers under the age of 25 (68 percent). With an encouraging A- rating on CinemaScore and no real new direct competition until Cinderella and Insurgent open in March, The DUFF has a good chance of holding up nicely going forward.

Hot Tub Time Machine 2 opened with $2.30 million on Friday, decreased 5 percent on Saturday to take in $2.19 million and declined 33 percent on Sunday to gross $1.47 million. That gave the film an opening weekend to Friday ratio of 2.59 to 1. Going forward Hot Tub Time Machine 2 is unlikely to hold up as well as its predecessor did, especially after receiving a lackluster C- rating on CinemaScore.

Warner's American Sniper continued to have a presence at the box office with a sixth place take of $10.05 million. The blockbuster Clint Eastwood directed Best Picture nominee starring Bradley Cooper was down a very solid 39 percent. American Sniper has grossed $320.01 million after 38 days of wide release and continues to march closer to becoming the highest grossing release of 2014 domestically (a mark which is currently held by The Hunger Games: Mockingjay - Part 1 with $336.41 million).