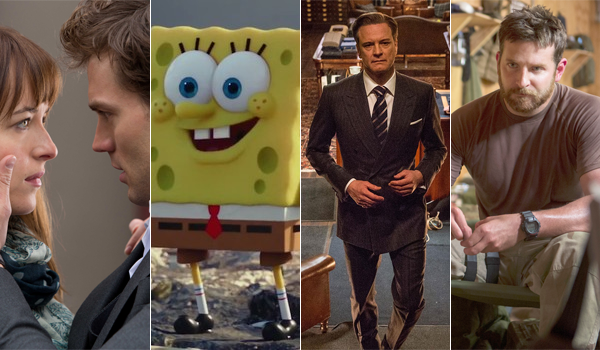 To no surprise, Fifty Shades of Grey was the month's top grossing flick as it rang up $145 million in its first 16 days of release. The first adaptation of the popular book series claimed the biggest February opening weekend in history with an $85.2 million 3-day bow, as well as the President's Day weekend record with just over $93 million in that extended 4-day frame.

In addition, Grey posted the fourth highest debut ever for an R-rated pic (trailing only The Matrix Reloaded, American Sniper, and The Hangover Part II). For distributor Universal, it was their largest opening weekend in history outside of the Fast & Furious franchise.

Arguably almost as impressive, though, were two other February releases. Paramount's The SpongeBob Movie: Sponge Out of Water blew away expectations with its $55.4 million opening weekend earlier in the month -- 73 percent higher than its 2004 predecessor. That well-received sequel has gone on to prove leggy as it accounted for $136.6 million through the end of the month.

The other standout performer has proven to be Fox's Kingsman: The Secret Service. Its early international release and positive reviews complemented a solid marketing campaign in North America, leading to perfect counter-programming over the Valentine's/President's Day weekend and very healthy word of mouth ever since. The graphic novel adaptation continues director Matthew Vaughn's winning streak in the genre following X-Men: First Class and the original Kick-Ass. The stylized tribute, and often send-up, to spy movies bowed to $36.2 million and totaled a strong $82.6 million through February 28.

Kingsman has an excellent shot at topping the $102.5 million final domestic haul of 2003's Daredevil, with an outside chance at approaching Ghost Rider's $115.8 million back in 2007 (both of those comic book properties similarly opened over President's Day weekend).

Meanwhile, blockbuster holdover American Sniper added $85.4 million to its massive run. That film's total domestic gross stood at $328.9 million through the final day of the month, and will overtake both The Hunger Games: Mockingjay - Part 1 ($336.7 million) and Guardians of the Galaxy ($333.2 million) as 2014's top earner before this coming weekend is up.

Looking ahead, March promises to continue the year-over-year improvement with a new high profile film set for release every weekend this month. Neill Blomkamp's Chappie is tracking to open well (around the $20 million mark) over the March 6 frame thanks to strong interest from young males and fans of the filmmaker's District 9 and Elysium. The Second Best Exotic Marigold Hotel is also poised to benefit from its predecessor's goodwill over the coming weekend, while Unfinished Business is expected to debut modestly.

The weekend of March 13 brings Disney's latest potential hit in Cinderella, which should build on the studio's incredible success in revitalizing various fairy tale stories (Into the Woods, Maleficent, Frozen, Oz the Great and Powerful, Alice in Wonderland) in recent years, as well as the Liam Neeson-Ed Harris thriller, Run All Night.

Later in the month, March 20 brings the sequel to Divergent, dubbed The Divergent Series: Insurgent, as well as the Christian-themed Do You Believe? and The Gunman. The final weekend of the month will see comedy superstars Will Ferrell and Kevin Hart team up for Get Hard. DreamWorks' Home opens over that same frame.

The average March over the past five years has yielded $817 million in ticket sales. We think that figure's attainable given the variety of appealing options moviegoers will have on top of February's holdovers.