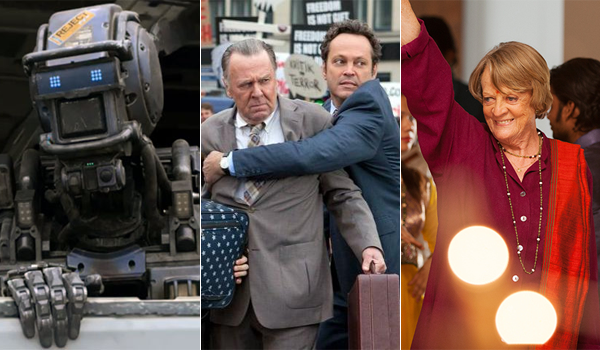 Sunday Update: Sony's CHAPPiE led the box office this weekend with an estimated $13.3 million. However, the Neill Blomkamp directed sci-fi film debuted below its already modest pre-release expectations. The film's performance also represented the smallest first place take since Ouija led last year's Halloween weekend box office with $10.74 million in its second weekend of release. While it wasn't expected to open anywhere near the $29.81 million start of 2013's Elysium, CHAPPiE ultimately opened a very underwhelming 55 percent softer than Blomkamp's previous effort. Instead, CHAPPiE performed much more in line with the $13.04 million start of Paul back in March of 2011. Potential for CHAPPiE was no doubt hampered by largely negative critical reviews. It should be noted that the reported production budget for CHAPPiE was a reasonable $49 million.

CHAPPiE opened with $4.55 million on Friday (which included a relativity large $750,000 from evening shows on Thursday), increased 16 percent on Saturday to take in $5.27 million and is estimated to decline 34 percent on Sunday to gross $3.48 million. That places the film's estimated opening weekend to Friday ratio at 2.92 to 1. CHAPPiE received a respectable B rating on CinemaScore, which suggests the film is going over better with moviegoers than it has with critics.

CHAPPiE grossed an estimated $2.0 million from IMAX locations. That represented a significant 15.0 percent of the film's overall gross this weekend.

Warner's Focus was down one spot this weekend to place in second with an estimated $10.02 million. The romantic heist film starring Will Smith and Margot Robbie fell 46 percent from last weekend; though it should be noted that the film took an additional hit from losing IMAX screens to CHAPPiE this weekend. Focus held up significantly better than 2013's After Earth, which fell 61 percent in its second weekend to gross $10.71 million. With a ten-day take of $34.57 million Focus is still running 25 percent behind the $46.10 million ten-day take of After Earth, but that percentage gap will continue to close going forward.

The Second Best Exotic Marigold Hotel started with $2.7 million on Friday, increased 33 percent on Saturday to take in $3.6 million and is estimated to decline 36 percent on Sunday to gross $2.3 million. That places the film's estimated opening weekend to Friday ratio at a promising 3.19 to 1. The Second Best Exotic Marigold Hotel received a solid B+ rating on CinemaScore.

The weekend's other new wide release, Fox's Unfinished Business, was off to a much poorer start with an estimated tenth place take of just $4.8 million. The Vince Vaughn led R-rated comedy opened below its already low expectations and marks yet another disappointment for Vaughn. Unfinished Business opened 39.5 percent below the $7.94 million start of 2013's Delivery Man and 72 percent below the $17.33 million debut of 2013's The Internship. There is no question that Vaughn is currently nowhere near the box office draw he was in the previous decade.

Unfinished Business opened with $1.8 million on Friday, increased a slim 3 percent on Saturday to gross $1.86 million and is estimated to decline 39 percent on Sunday to take in $1.14 million. That gives the film an estimated opening weekend to Friday ratio of 2.67 to 1. Unfinished Business received a lackluster B- rating on CinemaScore, which further suggests that the film will fade away from theatres very quickly.

Thanks in part to the limited amount of business generated from the weekend's new wide releases, Fox's Kingsman: The Secret Service was down just 30 percent and two spots from last weekend to take fourth with an estimated $8.3 million. The Matthew Vaughn directed graphic novel adaptation starring Colin Firth continues to display very solid holding power, especially for its genre. With a stronger than expected 24-day take of $98.03 million Kingsman: The Secret Service is now on the verge of reaching the $100 million domestic milestone.

In other box office news, Warner's American Sniper surpassed the $336.96 million total gross of The Hunger Games: Mockingjay - Part 1 to become the highest grossing release of 2014 domestically. American Sniper has blown past all expectations with $337.21 million to date. The Clint Eastwood directed blockbuster starring Bradley Cooper took in an estimated $4.51 million this weekend. That placed the film in eleventh for the frame and represented a 39 percent decline from last weekend's performance.

Saturday Update: Sony reports that CHAPPiE bowed to an estimated $4.5 million on Friday, including $750,000 from Thursday evening shows. Yesterday's figure was 11 percent lower than 2011's Source Code, which earned $5.05 million on opening day, and 59 percent lower than Neill Blomkamp's previous film, Elysium, which pulled an $11.1 million first day in August 2013. Unfortunately, poor reviews (30 percent on Rotten Tomatoes) are plaguing the flick with early word of mouth similarly struggling with a 67 percent RT user score and "B" CinemaScore. Sony notes, however, that the crowded market for R-rated films is playing against the $49 million budgeted movie and that forthcoming weeks could provide decent holding power. For opening weekend, BoxOffice is projecting an underwhelming $13 million first place finish.

In second place on Friday, Focus was off 55 percent from its opening day last week to $2.88 million. That gives the Will Smith-Margot Robbie con artist pic $27.4 million through eight days of release, 11 percent behind the pace of Limitless. BoxOffice projects a $9.1 million sophomore frame.

The Second Best Exotic Marigold Hotel debuted to a healthy $2.7 million from 1,573 theaters in third place yesterday. The sequel is benefiting from excellent goodwill toward the 2012 original film, which tallied $46.4 million during its staggered release that summer. Expectations are that the sequel will play very well throughout the weekend. BoxOffice projects a $9.3 million opening frame.

Fox's Kingsman: The Secret Service continues to impress. The graphic novel pic eased 29 percent from last week to $2.225 million yesterday, bringing its domestic tally to $91.95 million. Director Matthew Vaughn's latest success is trending 5 percent ahead of the pace of Daredevil and just over 7 percent behind Ghost Rider as it continues to show excellent staying power. BoxOffice projects an $8.1 million weekend.

In sixth place, Fifty Shades of Grey was down 52 percent to $1.7 million. The adaptation has totaled $152.5 million domestically thus far and remains ahead of the pace of the original Twilight. BoxOffice projects a $5.1 million weekend.

Meanwhile, American Sniper leapfrogged Guardians of the Galaxy as 2014's second highest grossing domestic release with another $1.15 million on Friday. Sniper's total stands at $333.84 million, just ahead of the Marvel blockbuster's $333.2 million tally. Sniper has an excellent chance to ultimately eclipse The Hunger Games: Mockingjay - Part 1 ($336.8 million) as last year's number one film on Sunday as BoxOffice projects a $4.4 million overall weekend.

Friday Update #2: Sources tell BoxOffice that CHAPPiE is on pace for $15 million-$16 million during its debut frame. That's a disappointing outcome for Sony and director Neill Blomkamp, considering that District 9 opened to $37.3 million and Elysium managed $29.8 million.

The Second Best Marigold Hotel is headed for a solid $10 million-$11 million haul. We expect the Fox Searchlight release to hold up very well outside of its opening frame.

Unfinished Business is set to join 2015's growing list of duds. The Vince Vaughn-led comedy is on pace for only $5.5 million-$6 million.

Friday Update #1: Sources report that Neill Blomkamp's CHAPPiE earned an estimated $750,000 from Thursday evening shows. That's a fair start for the sci-fi flick produced on $49 million, although less than half of what the filmmaker's Elysium brought in ($1.6 million) during Thursday shows back in August 2013.

Also opening this weekend are Unfinished Business and The Second Best Exotic Marigold Hotel. No early numbers are available at this time.