NORTH AMERICA: Weekend Estimates: 'Cinderella' Arrives at the Box Office Ball with a Strong $70.1M; 'Run All Night' a Distant Second with a Modest $11.0M 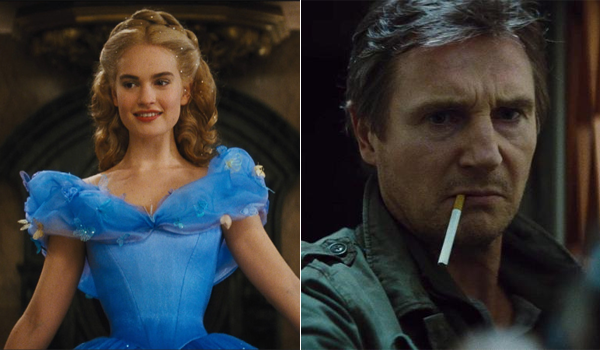 Sunday Update: Cinderella was off to a strong start this weekend with an estimated $70.05 million. Disney's well-received fairy tale adaptation opened just above its already lofty pre-release expectations. Cinderella also added some much needed life to what had been a slow start to the overall March box office. Without adjusting for ticket price inflation, Cinderella delivered the sixth largest debut ever for the month of March. The film opened just ahead of the $69.43 million start of last year's Maleficent, which was especially impressive given that unlike Maleficent, Cinderella didn't receive a bump from higher priced 3D admissions (though it did receive a bit of a bump from playing in IMAX locations, as IMAX grosses represented 7 percent of the film's overall gross).

Run All Night started with $3.86 million on Friday (which included an estimated $455,000 from evening shows on Thursday), was up 16 percent on Saturday to take in $4.47 million and is estimated to fall 40 percent on Sunday to gross $2.69 million. That places the film's estimated opening weekend to Friday ratio at 2.85 to 1. The audience breakdown for the film skewed heavily towards moviegoers over the age of 25 (86 percent) and slightly towards female moviegoers (52 percent). Run All Night received a healthy A- rating on CinemaScore, though positive word of mouth may not help the film all that much with Insurgent, Get Hard and Furious 7 all on the horizon.

It was an extremely tight race for places third through sixth this weekend, with third place and sixth place currently separated by just an estimated $500,000.

Fox's Kingsman: The Secret Service continued to hold up very nicely this weekend with an estimated third place take of $6.20 million. The Matthew Vaughn directed graphic novel adaptation starring Colin Firth was up one spot and down just 25 percent from last weekend, as the film continues to be aided by both strong word of mouth and by lackluster direct competition. Kingsman: The Secret Service has grossed a stronger than expected $107.37 million through 31 days of release.

Warner's Focus placed in fourth with an estimated $5.81 million. The romantic heist film starring Will Smith and Margot Robbie was down two spots and a solid 42 percent from last weekend. Focus has grossed $44.03 million in 17 days. That places the film 19 percent behind the $54.52 million 17-day take of 2013's After Earth, but that percentage gap will continue to close going forward.

Sony's CHAPPiE finished very closely behind Focus in fifth with an estimated $5.80 million. After leading the box office last weekend, the Neill Blomkamp directed sci-fi film was down four spots and a sharp 57 percent this weekend. In addition to poor critical reviews and mixed word of mouth, CHAPPiE also took a hit this weekend from losing IMAX screens to Cinderella. With a ten-day start of just $23.41 million, CHAPPiE is running a disappointing 58 percent behind the $56.00 million ten-day take of 2013's Elysium.

The Second Best Exotic Marigold Hotel placed in sixth with an estimated $5.70 million. The ensemble comedy sequel from Fox Searchlight was down three spots and just 33 percent from last weekend, though it should be noted that the film did expand into an additional 449 locations this weekend. The Second Best Exotic Marigold Hotel has grossed a very solid $18.06 million in ten days, which places it 24 percent behind the $23.69 million ten-day gross of last year's The Hundred-Foot Journey.

On the platform front, It Follows was off to a healthy start with an estimated $163,453 from four locations in New York and Los Angeles. That gave the critically acclaimed horror thriller from RADiUS-TWC a promising per-location average of $40,863 for the frame. It Follows will expand into additional locations next weekend.

Saturday Update: Disney reports that Cinderella bowed to an excellent $23.03 million on Friday, claiming the sixth best ever opening day in March behind The Hunger Games, Alice In Wonderland, 300, Watchmen, and Oz the Great and Powerful. Early word of mouth is solid as the film scored an 87 percent Rotten Tomatoes audience score as of this morning, alongside an 84 percent score from critics. Friday's figure was just under last summer's Maleficent ($24.3 million) and the $24.1 million first day of 2013's Oz, also from Disney. There's no questioning the studio's reborn drawing power with fairy tale flicks in the wake of films like that one, Maleficent, Into the Woods, and Frozen -- the latter of which was revisited with a brand new short film in front of Cinderella, playing to the strong debut. With the promise of family audiences turning out over the weekend and healthy legs ahead, Cinderella is set to land around $72 million for its opening weekend.

Bowing in second place was the latest Liam Neeson thriller, Run All Night. Unfortunately though, the pic pulled a tame $3.855 million in its debut, 19 percent less than A Walk Among the Tombstones earned last September. Between this film's disappointing 66 percent audience score and 59 percent critic score, there's undoubtedly some burnout among audiences from what is the third Neeson action flick to open in the last six months. Warner Bros. does report, however, that the film nabbed an encouraging "A-" CinemaScore. BoxOffice is projecting a debut weekend around $10.3 million.

Focus claimed third place yesterday as it eased 41 percent from last Friday to $1.7 million. The Will Smith flick's total stands at $39.9 million. Look for a weekend around $5.9 million.

Kingsman: The Secret Service landed in fourth yesterday as it dropped just 25 percent from last Friday to $1.67 million. The hit graphic novel adaptation has earned an impressive $102.84 million to date and should take in around $6.2 million this weekend.

The Second Best Exotic Marigold Hotel filled out the top five yesterday with $1.625 million, off just 40 percent from opening day last week. The well-received sequel has tallied $13.99 million through eight days of release and is eyeing a $5.7 million sophomore frame.

Moving down to sixth place, CHAPPiE was off 66 percent from opening day last week to $1.55 million yesterday. The Neill Blomkamp sci-fi actioner has tallied $19.2 million through eight days of release. BoxOffice projects a $5.2 million sophomore frame.

Friday Update #2: Sources tell BoxOffice that Cinderella is on pace for a $70 million debut, which  would be enough for it to squeak past the $69 million opening Maleficent managed last Summer.

Run All Night is eyeing $15 million--a solid start considering that Cinderella is hogging the spotlight.

Friday Update #1: Sources report that Disney's Cinderella posted a great start to opening weekend with $2.3 million from Thursday night shows. By comparison, the studio's Oz the Great and Powerful pulled $2.0 million as part of a $79.1 million weekend bow two years ago this month, while Maleficent took a $4.2 million Thursday as part of its $69.4 million opening weekend. It should be noted, however, that the latter film opened during summer when preview grosses typically skew higher thanks to young audiences being out of school.

Also opening this weekend is Run All Night from Warner Bros., starring Liam Neeson and Ed Harris. That flick pulled $455,000 from last night's shows, according to the studio. That figure falls in line with Neeson's previous original flick, A Walk Among the Tombstones, which landed a $430,000 start last September as part of a $12.8 million weekend.

Stay tuned for more updates today and throughout the weekend.