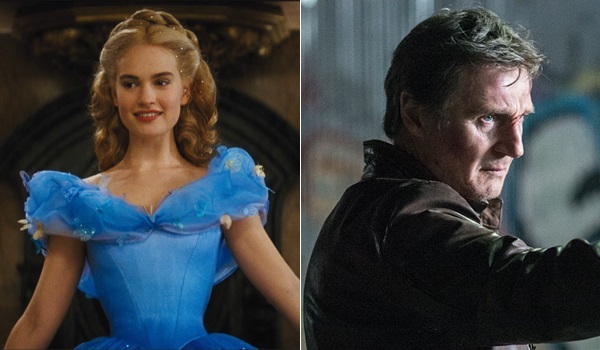 Disney reports that Cinderella earned $4.57 million on Wednesday, bringing its six-day domestic total to a strong $83.1 million. The flick is currently pacing 6 percent behind where Maleficent stood through the same point, although that film had the advantage of 3D surcharges and summer weekday business.

Run All Night took in $0.82 million yesterday, giving it a sum of $13.85 million through six days. The latest Liam Neeson thriller is pacing 13 percent behind A Walk Among the Tombstones.

Moving back up to third place, Kingsman: The Secret Service eased 12 percent from last Wednesday to $0.65 million. The hit graphic novel adaptation has amassed $109.4 million domestically up to this point.

Meanwhile, CHAPPiE added $0.57 million yesterday as it fell 41 percent from the same day last week. Neill Blomkamp's latest has taken in an underwhelming $25.15 million through 13 days.