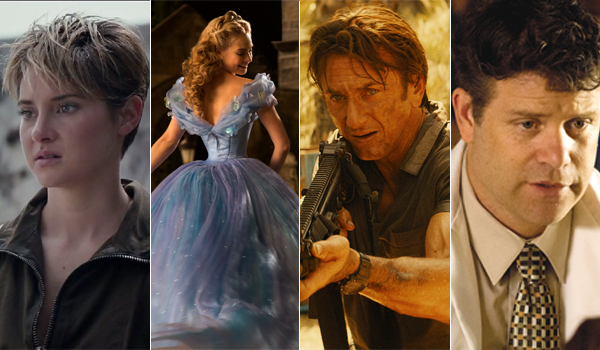 Sunday Update: Lionsgate's The Divergent Series: Insurgent led the box office this weekend with an estimated first place debut of $54.03 million. The second installment of the young adult series starring Shailene Woodley debuted in line with pre-release expectations. Insurgent opened just below the $54.61 million debut of last year's Divergent. However, it should be noted that Insurgent had the added advantage of higher priced 3D admissions, while Divergent did not. With that said, Insurgent was still off to a very solid start of its own this weekend. It should also be noted that the film's overseas start was significantly stronger than that of Divergent.

Insurgent opened with $21.31 million on Friday (which included an estimated $4.1 million from evening shows on Thursday), fell 7 percent on Saturday to gross $19.88 million and is estimated to decline 35 percent on Sunday to gross $12.84 million. That places the film's estimated opening weekend to Friday ratio at 2.54 to 1. In comparison, Divergent had a ratio of 2.40 to 1. Insurgent having a slightly more back-loaded opening weekend performance than Divergent had could be a good sign for Insurgent going forward, though it could also be a sign of the film's initial audience being less fan-driven this time around.

The audience breakdown for The Divergent Series: Insurgent skewed towards female moviegoers (60 percent) and towards moviegoers under the age of 25 (55 percent). The film received a healthy A- rating on CinemaScore.

Insurgent grossed $3.6 million from IMAX locations, which represented 6.7 percent of the film's overall grosses this weekend.

Cinderella placed in second this weekend with a strong $34.49 million. Disney's blockbuster fairy tale adaptation was down 49 percent from last weekend's debut. That represented a respectable second weekend hold, especially when considering the direct competition the film faced from Insurgent and that Cinderella lost most of its IMAX screens to Insurgent as well. Cinderella zoomed past the $100 million domestic mark this weekend and has grossed $122.04 million in ten days. That places the film a slim 5 percent behind the $128.18 million ten-day start of last year's Maleficent (which declined 51 percent in its second weekend to gross $34.33 million). Maleficent went on to stabilize very nicely later on in its run, and Cinderella will have a strong chance of doing the same, especially given the limited amount of new options for family audiences in April.

With Insurgent and Cinderella currently dominating the box office, the rest of the weekend's line-up made very little noise.

Warner's Run All Night is estimated to finish in a distant third place with $5.12 million. The Liam Neeson led action thriller was down 54 percent from last weekend, which represented a typical second weekend decline for a Neeson vehicle. Run All Night has grossed $19.72 million in ten days. That is a bit below expectations and places the film 5 percent behind the $20.83 million ten-day take of last year's A Walk Among the Tombstones (which fell 67 percent in its second weekend to gross $4.19 million).

Open Road's The Gunman debuted in fourth place with an estimated $5.01 million. The Sean Penn led action thriller opened a bit below its already modest pre-release expectations. Online activity for the film had been especially soft in the weeks leading up to its release and the film arriving so soon after Run All Night certainly didn't help matters either. The Gunman opened a significant 54.5 percent softer than the already soft $11.01 million start of Run All Night last weekend.

The Gunman started out with $1.77 million on Friday, increased 13 percent on Saturday to gross $1.99 million and is estimated to decline 38 percent on Sunday to take in $1.24 million. That gives the film an estimated opening weekend to Friday ratio of 2.83 to 1. The Gunman received a lackluster B- rating on CinemaScore and should fade away from theatres quickly.

Fox's Kingsman: The Secret Service rounded out the weekend's top five with an estimated $4.6 million. The Matthew Vaughn directed graphic novel adaptation starring Colin Firth was down just 26 percent from last weekend, as the film continues to hold up very nicely. The 38-day total for Kingsman stands at a stronger than expected $114.57 million.

Do You Believe? arrived in sixth place with an estimated $4.0 million. The faith-based drama from Pure Flix opened a bit below expectations and failed to approach the $9.22 million start of last year's God's Not Dead, though it wasn't widely expected to do so. Do You Believe? opened with $1.2 million on Friday, increased a slim 8 percent on Saturday to gross $1.3 million and is estimated to see a 15 percent jump on Sunday to gross $1.5 million. That places the film's estimated opening weekend to Friday ratio at 3.33 to 1. Do You Believe? will hope to hold up well going forward, thanks in part to the approaching Easter holiday.

On the platform front, It Follows continued its solid platform performance with an estimated $352,248 from 32 locations. That gave the critically acclaimed horror thriller from RADiUS-TWC a per-location average of $11,008 for the frame. It Follows has grossed $572,911 through ten days of platform release. Based on its performance thus far and on the strong critical buzz surrounding the film, It Follows is scheduled to expand into semi-wide release next weekend.

Saturday Update: Lionsgate reports that The Divergent Series: Insurgent posted an opening day of $21.3 million, including $4.1 million from Thursday night's early shows. The opening day figure is down nearly 7 percent from Divergent's first day last year despite gaining the advantage of 3D prices for the sequel this time. However, Insurgent did post a stronger increase from Thursday night than its predecessor. Word of mouth appears somewhat mixed as the sequel sits at 71 percent on Rotten Tomatoes' audience score -- 10 points lower than its predecessor on the day after release -- and a disappointing 33 percent from critics. In the film's favor, the studio reports CinemaScore registered as an "A-". BoxOffice is projecting a $51 million opening weekend.

Moving to second place yesterday was Disney's Cinderella, off 59 percent from opening day last week to $9.53 million as new competition for the female audience hit the marketplace. Word of mouth remains healthy, though, and BoxOffice is projecting a quick recovery as the film aims for a $34.5 million sophomore frame.

Run All Night itself claimed fourth with $1.405 million on Friday, down 64 percent from its first day. The film's total stands at an even $16 million through eight days of release. BoxOffice projects a $4.6 million second frame.

Filling out the top five on Friday, Kingsman: The Secret Service slipped only 24 percent from last Friday to add another $1.275 million. The hit graphic novel pic has totaled an impressive $111.25 million domestically thus far. Look for a weekend around $4.6 million.

Meanwhile, low-budget Do You Believe? debuted to $1.25 million yesterday. Unfortunately, the latest faith-based picture from Pure Flix Entertainment wasn't quite as strong as God's Not Dead's $2.8 million first day (off by 55 percent). Critics haven't taken to the film (13 percent), but audience word of mouth is a bit more reasonable (71 percent) for the genre. BoxOffice projects a solid $4.7 million opening weekend.

Friday Update #2: Sources tell BoxOffice that Insurgent is headed for a debut frame somewhere between $50 million-$52 million. It's still early yet and word of mouth could push the film closer to $55 million. The first Divergent film opened to $54.6 million last March.

The Gunman is eyeing a debut of around $7 million. Sean Penn's bid at a Liam Neeson-style career reinvention is falling flat.

Do You Believe?, a faith-based drama, is set for $4 million or so.

Check back tomorrow for official studio numbers and update predictions.

Friday Update #1: Sources are reporting that The Divergent Series: Insurgent pulled an estimated $4.1 million from Thursday evening shows. While still generally very healthy, that figure is down over 16 percent from Divergent's $4.9 million Thursday haul entering the same weekend last year -- despite Insurgent boasting the adding benefit of 3D and IMAX prices.

Also opening this weekend are The Gunman and Do You Believe?, however, Thursday grosses were not available for those two films at the time of publishing.

Meanwhile, Cinderella looks to finish in second place this weekend with what is expected to be a solid hold from its bow last week.

Tags: north-america, The Gunman, Do You Believe?, Cinderella, The Divergent Series: Insurgent