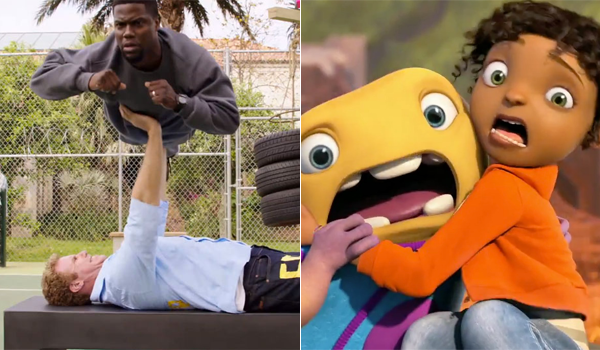 Sunday Update: Home surprised in a big way this weekend with a significantly stronger than expected estimated first place start of $54.0 million. The 3D computer animated film from Fox and DreamWorks Animation had been widely expected to find itself in a close race for first place with Get Hard heading into the weekend. Instead, Home led the weekend box office with ease, which was very welcome news for DreamWorks Animation after a string of softer than expected performers that started back in July of 2013 with Turbo. The opening weekend performance of Home represented the largest opening weekend performance for DreamWorks Animation since the $60.32 million debut of Madagascar 3 back in June of 2012. Home opened an impressive 68 percent stronger than the $32.21 million start of last year's Mr. Peabody & Sherman and 24 percent stronger than the $43.64 million debut of 2013's The Croods.

Despite mixed critical reviews, Home proved to be critic proof this weekend, thanks in part to the relatively small amount of animated releases in the marketplace since December and in part to the star power of the film's vocal cast, which includes Jim Parsons, Rihanna, Steve Martin and Jennifer Lopez.

Home opened with $15.70 million on Friday (which included an estimated $650,000 from Thursday evening shows), increased a healthy 39 percent on Saturday to take in $21.88 million and is estimated to decline 25 percent on Sunday to gross $16.43 million. That places the film's estimated opening weekend to Friday ratio at 3.44 to 1. The film received a strong A rating on CinemaScore, which suggests that the film is going over much better with moviegoers than it has with critics and is a good early sign going forward. Home should also be helped out going forward by no new animated films entering the marketplace between now and the June 19th launch of Disney's Inside Out.

While it settled for second place this weekend, Warner's Get Hard was off to a good start with an estimated $34.61 million. The R-rated comedy starring Will Ferrell and Kevin Hart opened toward the higher end of pre-release expectations. The combined drawing power of Ferrell and Hart was clearly able to make up for both largely negative critical reviews and a relative lack of online buzz for the film heading into the weekend. Get Hard may have also received a boost this weekend from moviegoers who wanted to catch the film before Universal's highly anticipated Furious 7 enters the marketplace next weekend. Get Hard opened just below the $35.54 million start of 2010's The Other Guys.

Get Hard started out with $12.94 million on Friday (which included an estimated $1.8 million from Thursday evening shows), increased a slim 1.5 percent on Saturday to take in $13.14 million and is estimated to fall 35 percent on Sunday to gross $8.54 million. That places the film's estimated opening weekend to Friday ratio at 2.67 to 1, which could be an early sign of front-loading going forward. The film received a so-so B rating on CinemaScore, which also isn't the greatest early long-term sign (especially with the mentioned Furious 7 quickly approaching). The audience breakdown for Get Hard skewed towards male moviegoers (54 percent) and towards moviegoers over the age of 25 (61 percent).

Lionsgate's The Divergent Series: Insurgent was down two spots this weekend to place in third with an estimated $22.08 million. The second installment of the young adult series starring Shailene Woodley fell a sharp 58 percent from last weekend's first place debut. Insurgent experienced a sharper second weekend decline than last year's Divergent did; as that film fell 53 percent in its second weekend to gross $25.62 million. While Insurgent is having a solid box office run of its own so far with a ten-day start of $86.39 million, the film is running 8.5 percent behind the $94.38 million ten-day take of Divergent. It should be noted that the overseas start for Insurgent continues to be significantly stronger than that of Divergent.

Cinderella was also down two spots this weekend to place in fourth with an estimated $17.52 million. Disney's blockbuster fairy tale adaptation was down a sharp 50 percent from last weekend. Despite strong critical reviews and good word of mouth, direct competition from both Home and Insurgent have clearly taken a toll on the film's holding power so far. With that said, Cinderella has still grossed a very strong $150.02 million through 17 days of release. That places the film 8 percent behind the $163.02 million 17-day take of last year's Maleficent. Cinderella may still stabilize going forward, especially given the limited amount of new options for family audiences in April.

It Follows continued its noteworthy performance this weekend with an estimated fifth place take of $4.02 million. The critically acclaimed horror thriller from RADiUS-TWC expanded into semi-wide release this weekend after two weeks of platform release. It Follows has grossed $4.76 million in 17 days and could hold up better than usual for its genre going forward thanks to its strong word of mouth and critical reviews.

On the platform front, A24's While We're Young was off to a very nice start this weekend with an estimated $242,152 from 4 locations in New York and Los Angeles. That gave the Noah Baumbach directed comedy starring Ben Stiller and Naomi Watts a per-location average of $60,538 for the frame. While We're Young will expand into additional locations next weekend and is scheduled to receive a nationwide expansion on April 10th.

Warner Bros. reports that Get Hard bowed to a strong $12.91 million in second place on Friday. The Will Ferrell-Kevin Hart comedy superstar team-up opened in line with the likes of The Other Guys ($13.1 million opening day), Blades of Glory ($12.4 million), and just 10 percent behind Ride Along ($14.4 million). With few successful comedies in the market over recent months, the teaming proved to be an irresistible one for Ferrell and Hart fans. Unfortunately, early word of mouth isn't positive: the film registered a lackluster "B" CinemaScore, while the Rotten Tomatoes audience has given it a disappointing 66 percent rating through Saturday morning (on top of critics' 33 percent). Even still, BoxOffice is projecting a hearty $34.5 million opening weekend.

The Divergent Series: Insurgent posted $6.85 million in third place yesterday, down 68 percent from its first day last Friday. That drop is slightly sharper than Divergent's 64 percent second Friday drop last year, and puts Insurgent at an eight-day total of $71.2 million (about 7.5 percent behind Divergent). BoxOffice projects $21.6 million for its sophomore frame.

Disney's Cinderella was off 50 percent from last Friday to $4.73 million yesterday. With $137.24 million in the bank domestically, the film is eyeing a third weekend total around $17.5 million.

Buzzy horror hit It Follows cracked the top five and pulled $1.4 million on Friday as it expanded into semi-wide release across 1,218 screens for an $1,160 per-theater average. That gives the flick $2.15 million in all so far. BoxOffice projects $4.5 million this weekend.

Friday Update #2: Sources tell BoxOffice that Home and Get Hard are both off to strong starts.

Home will easily win the weekend with a total that could end up between $45 million-$50 million based on early Friday results. That would mark a huge win for DreamWorks following the disappointing performance of How to Train Your Dragon 2 and Penguins of Madagascar last year.

Get Hard is headed for a $35 million debut. Kevin Hart continues to be a solid earner, while Will Ferrell receives a much-needed boost.

Friday Update #1: Warner Bros. reports that Get Hard started with $1.8 million from early shows last night. That easily tops the $800,000 Thursday night of The Wedding Ringer back in January, as well as Ride Along's $1.06 million last year. The Will Ferrell-Kevin Hart comedy team-up will have to fend off poor reviews, but this indicates a strong opening weekend ahead.

Also opening this weekend is Fox/DreamWorks' Home, although no early figures had been reported at the time of publishing.

Check back for further updates today and throughout the weekend.