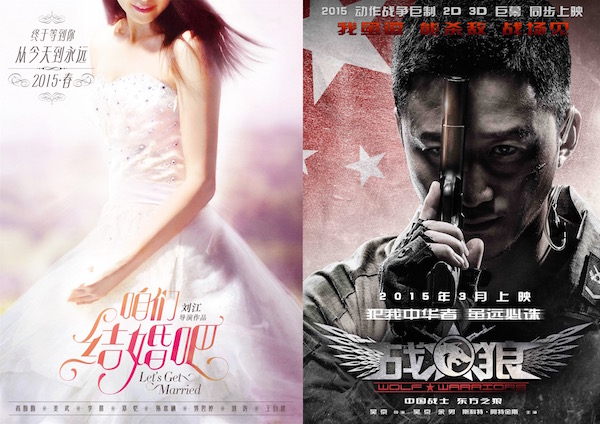 by EntGroup Consulting and Jonathan Papish

Things heat up for the three-day Tomb Sweeping Holiday as the romantic Let’s Get Married (咱们结婚吧) and the adrenaline fueled Wolf Warriors (战狼）square off in a box office showdown. Both films match up well in awareness and intent to purchase according to EntGroup’s EFMT Marketing Index.

Strongly marketed towards the Post-’80/Post-’90 female demographic, Let’s Get Married stars Gao Yuanyuan (高圆圆) and Jiang Wu (姜武) in the lead up to their wedding day. Gao was featured in the massively popular 2013 television show of the same name, but Jiang has replaced lead actor Huang Haibo (黄海波) after a prostitution scandal. The TV show has been watched nearly 4.3 billion times according to EntGroup’s Online Viewership Tracker so the franchise has a solid fan base already. However, returning director Liu Jiang (刘江) promises a standalone story so both diehard fans of the tv show and new viewers alike can enjoy the film.

Prowling into theaters on the same day, Wolf Warriors is an action film geared towards the corresponding male demographic. In his second directorial effort, martial artist Jacky Wu (吴京) also stars as a disgraced army commando expelled from his squadron who is then admitted into a mysterious special force known as the “Wolf Warriors”. British martial artist Scott Adkins from The Expendables 2 also makes an appearance and should bring in Chinese fanboys obsessed with that American action series.

Other films coming out this holiday weekend include Insanity, a psychological thriller which is garnering buzz for Sean Lau’s  acting, Midnight Garage, a horror film based on a Hong Kong urban legend about a haunted parking garage, and Outcast starring Nicolas Cage which was held over from October.

Aside from Let’s Get Married and Wolf Warriors duking it out for the top spot, look for a strong hold from this weekend’s #1, Kingsman, and perhaps another good showing for Cinderella going into its fourth week of release.