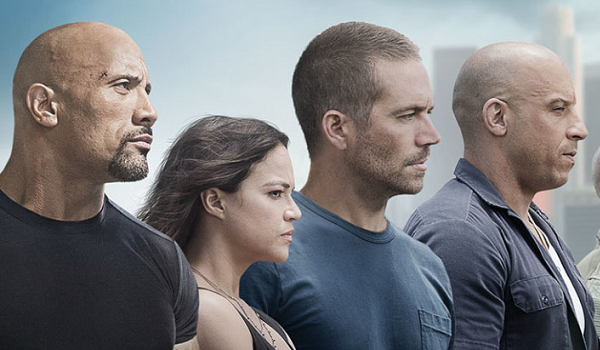 Universal's highly anticipated Furious 7 sped past its already lofty expectations this weekend with a record-breaking $147.19 million start. Thanks to a stronger than expected Easter Sunday hold, Furious 7 came in a significant $3.57 million higher than Sunday's estimate. The well-received seventh installment of the popular franchise featuring Vin Diesel, Dwayne Johnson and the late Paul Walker opened an extremely impressive 55 percent stronger than the $95.02 million start of last year's Captain America: The Winter Solider to establish a new opening weekend record for the month of April. Furious 7 also opened 51 percent stronger than the $97.38 million start of 2013's Fast & Furious 6 to easily set a new all-time opening weekend record for Universal. Furious 7 claimed the ninth largest opening weekend of all time (without adjusting for ticket price inflation).

The opening weekend performance of Furious 7 was made even more impressive by the fact that it was accomplished over Easter weekend; a holiday weekend in which movie-going tends to be subdued. The previous opening weekend record over Easter weekend was the $61.24 million debut of 2010's Clash of the Titans. Anticipation for Furious 7 was helped out by a number of factors, which included the strong reception to Fast & Furious 6, the film's largely positive critical reviews, a lack of high-profile films aimed at male moviegoers in recent weeks and by the tragic passing of Paul Walker in 2013.

Furious 7 did prove to be quite front-loaded this weekend, though that wasn't much of a surprise given Good Friday and that The Fast and the Furious franchise has a history of its weekends being Friday heavy. Furious 7 opened with $67.41 million on Good Friday (which included an estimated $15.8 million from evening shows on Thursday), took in $46.63 million on Saturday, which was a sharp, but understandable 31 percent decline (especially with competition from the NCAA Final Four), and fell just 29 percent on Easter Sunday to gross $33.15 million. That placed the film's opening weekend to Friday ratio at 2.18 to 1. Despite the early front-loading, Furious 7 will still have the opportunity to hold up relatively well going forward, thanks in part to strong word of mouth (the film received an A rating on CinemaScore) and the lackluster release schedule throughout the rest of April. Eventually surpassing the $300 million domestic mark shouldn't be a problem for the film.

Furious 7 benefited from having clear four-quadrant appeal. The audience breakdown for Furious 7 skewed very slightly towards male moviegoers (51 percent) and towards moviegoers 25 years and older (56 percent). The film grossed $13.3 million from IMAX locations, which represented 9 percent of this weekend's overall gross.

Home was down one spot this weekend to finish in a distant second with $27.01 million. The successful 3D computer animated film from Fox and DreamWorks Animation was down a sizable 48 percent from last weekend. Clearly, the record-breaking launch of Furious 7 took a toll on the rest of the marketplace in general this weekend and led to additional front-loading for both Home and Get Hard last weekend. With that said, Home continues to perform very well in the bigger picture with a stronger than expected $95.24 million in ten days. That places the film 7 percent ahead of the $88.89 million ten-day start of 2013's The Croods (which fell 39 percent in its second weekend to gross $26.71 million). Home will hope to stabilize going forward, especially with no new animated films entering the marketplace between now and the June 19th launch of Disney's Inside Out.

Warner's Get Hard was down one spot from last weekend to fall to third with $13.13 million. The R-rated comedy starring Will Ferrell and Kevin Hart was down a very sharp 61 percent from last weekend. In addition to the new direct competition from Furious 7, Get Hard was also likely hurt this weekend by mixed word of mouth and poor critical reviews. The ten-day take for Get Hard stands at $57.22 million. That is towards the lower end of pre-release expectations and places the film 18 percent behind the $69.95 million ten-day gross of 2010's The Other Guys (which fell 51 percent in its second weekend to gross $17.41 million).

Cinderella claimed fourth place this weekend with $10.18 million. Disney's blockbuster fairy tale adaptation had one of the weekend's better percentage holds among wide releases, as it was down 40 percent from the previous frame. Cinderella has grossed a strong $167.14 million in 24 days. That currently ranks the film as the highest grossing release of 2015 to date, though obviously Furious 7 will be overtaking it for first place in just a matter of days. Cinderella is running 10 percent behind the $185.88 million 24-day take of last year's Maleficent.

Lionsgate's The Divergent Series: Insurgent followed closely behind in fifth with $10.13 million. The second installment of the young adult series starring Shailene Woodley fell a sharp 53 percent from last weekend. Insurgent surpassed the $100 million domestic mark this weekend and continues to perform on the lower end of expectations with a 17-day take of $103.51 million. That places the film 9 percent behind the $114.01 million 17-day gross of last year's Divergent.

On the limited front, The Weinstein Company's Woman in Gold was off to an encouraging start with $2.09 million from 258 locations. That gave the drama starring Helen Mirren and Ryan Reynolds a per-location average of $8,107 and placed the film in seventh place for the frame. Since its debut on Wednesday, Woman in Gold has grossed $2.19 million to date.