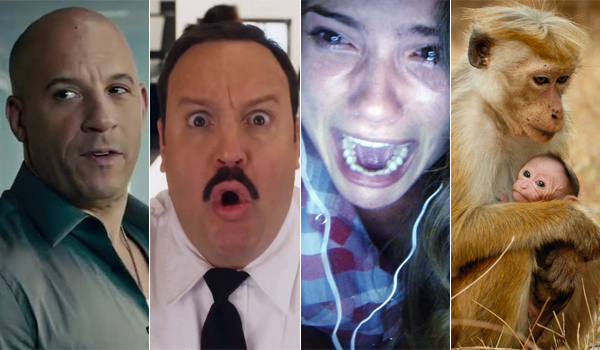 LOS ANGELES - April 16, 2015 - According to Fandango, the nation's leading digital destination for moviegoers and fans with more than 36 million unique visitors per month*, "Furious 7" in its third weekend continues to dominate ticket sales. New releases, "Paul Blart: Mall Cop 2" and "Unfriended," are also clicking well with audiences. Each one of the three films is earning high scores on Fanticipation, Fandango's movie buzz indicator, meriting an impressive 84, 83, and 75 out of 100 points, respectively.

"Blart" is collaring the best advance ticket sales of any Kevin James-starring vehicle, taking down James' 2011 "Zookeeper" at the same point in that film's ticket sales cycle on Fandango. "Unfriended" is scaring up significantly higher advance sales than the 2013 horror thriller, "Oculus."

"Movie audiences of all ages have something to look forward to at theaters this weekend," says Fandango Chief Correspondent Dave Karger. "'Paul Blart: Mall Cop 2' will appeal to families who love Kevin James' goofy antics, while teen fans will love the intense scares in ‘Unfriended.' Meanwhile, ‘Furious 7' will continue to score with thrill-seekers seeing the film for the first, second, or third time."

On Fandango's movie recommendation show, "Weekend Ticket," Fandango Contributor Dan Perrault interviews the "Unfriended" stars via Skype, asking them how they managed to create an effective thriller out of "one long Skype conversation filmed in one take." The full episode can be found at http://www.fandango.com/WeekendTicket.