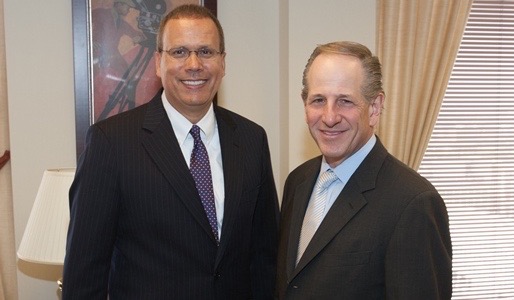 After 80 years in business, the family company looks forward to a bright future.

Marcus Theatres has grown considerably from its humble roots in its home state of Wisconsin. The company opened its first cinema outside of Wisconsin as recently as the early '90s. "We traditionally had just stayed at home in Wisconsin, and that was really my grandfather's mentality: you sort of stay close to home," says Greg Marcus, grandson of founder Ben Marcus and president and CEO of the Marcus Corporation. "With time we built out Wisconsin and broadened our horizons. We knew we were good at what we did; we always had good people in good management teams. We leveraged that and grew the business."

Today, Marcus Theatres is one of the top exhibition circuits in North America, operating nearly 700 screens across seven states. The last 18 months have seen an investment of more than $100 million in the company's exhibition business, as Marcus Theatres focuses its efforts on offering what Jeff Tomachek, executive vice president, calls "a complete entertainment destination."

In many ways, it seems like a natural progression for a company that has long been active in a diverse number of consumer-oriented businesses that include hotels and restaurants. Much of that investment is dedicated to amenities that complement the theater-going experience and offer patrons a great array of choices when going to the movies. Marcus Theatres was a pioneer in exhibitor-branded premium large-format screens, commonplace among leading exhibitors today but ahead of its time when the company unveiled its first three-story-tall, 75-foot-wide screen at the Westown Cinema in Waukesha, Wisconsin, in 1999. The UltraScreen brand is now bundled together with the company's own line of recliner seats, DreamLoungers, to create the UltraScreen DLX experience. The new UltraScreen DLX locations have led Marcus Theatres to adopt yet another innovation in its theaters: reserved seating. Kim Barengo, a 27-year veteran at Marcus Theatres, who worked her way up from the concession stand to district director, believes customers enjoy the hassle-free experience of claiming seats well in advance without having to snake articles of clothing across seats. "People commit earlier in the day to that experience and can show up five minutes before or five minutes after show time and know they'll still have their seat."

Marcus Theatres' strategy for the future doesn't end in the screening room. "We tend to survey and spend a lot of time talking to our guests, and what we heard a number of years ago were two really important things that mattered to them: screen size and the comfort and quality of seats," explains Tomachek. "That's around the same time they started to talk to us about additional food-and-beverage options as well." The company now offers four different enhanced food-and-beverage options in its theaters: Zaffiro's, a full-service pizza restaurant; Zaffiro's Express, offering heartier options beyond candy and popcorn sold through the concession stand; in-theater dining through its Big Screen Bistro auditoriums; and cocktails through its Take 5 Lounge areas in the lobby. "The Marcus Corporation has a long history in restaurants and food and beverage. On the Marcus Theatres side we have been able to draw from that and learn from and utilize some of those resources. It has made it a natural progression for us to move some of that stuff into our theaters."

The transformation of the neighborhood movie theater isn't a phenomenon exclusive to Marcus Theatres. The exhibition industry has largely followed the example of airports and sports stadiums, reconceptualizing the use of space in the theater to allow consumers more options to spend more. Tomachek sees the evolution as part of creating a more comfortable and customizable experience for the audience. "If you look at what the moviegoing experience was five to eight years ago, you see something very different than what you see now. It's all about what's that next thing; what is the consumer looking for and how can we provide it?"

Extra amenities give consumers the ability to spend more when they'd like, but what about those who believe a night out at the movies is already too expensive as it is? Marcus Theatres rolled out its $5 Tuesday to bridge that gap. The program offers $5 admission with a free small popcorn-an alluring discount for families, considering the slow economic recovery of recent years. "Tuesdays have become one of our busiest days of the week. We have a lot of moviegoers and families that hadn't been to the theater in years or felt that they could no longer afford to go to the movies," says Barengo. "Last summer I had my babysitter cancel on me on a Tuesday. She said, ‘Is there any other day of the week that I can watch your kids? I really want to go to the movies on Tuesday.'"

"It's been a resounding success for us but, more importantly, it ties in to the larger picture of what we're trying to accomplish organizationally: making sure that the health and well-being of our company and industry as a whole remain strong," expands Marcus Theatres president and CEO Rolando Rodriguez, who shared his excitement about the program with BOXOFFICE in an interview last year. "The industry went down in attendance last year, and one of our ultimate goals is to continue to see that consumers find our value proposition to be attractive. The way we define ‘value' isn't only through the offerings and amenities we have ... but also looking at the pricing of those very options. One of the key things in our industry is that we cater to the general masses, so we have to be very cognizant of having the right price for the right customer at the right time. It doesn't mean we have a discounted price on the weekend-that's a high-demand period-but there should be a time period that we can cater to those value consumers that we have already lost due to the economic conditions in our country. ... I can't tell you how many letters, notes, and comments we've received from families that we had lost because they couldn't afford to come to our theater anymore. We picked to have it on a weekday, and although it's not the most desirable time period, it still gives people the chance to enjoy an entertainment experience with their families."

The value-pricing initiative is a central part of the company's strategy of encouraging repeat visits to Marcus Theatres. "Hitting that $5 price point is making it affordable for people that not only haven't been here for a while but also to those that already come on the weekend but want to check out an extra movie within their budget," says Barengo. Marcus Theatres' loyalty program complements that strategy. Launched in April 2014, the program expects to enroll its one millionth member within its first year.

"While attendance is largely driven by the quality and quantity of films that are released throughout the course of the year, we also have a role as exhibitors to make sure that we properly satisfy the consumers to build their loyalty, their constant attendance, and to see if there are other ways to keep on bringing them into our theaters," Rodriguez emphasizes. Earlier this year, Marcus Theatres began placing more focus on hosting film series across its cinemas. The company worked with Disney to host a film series called "Enchanted Tales" that ran over the course of four different weekends at select Marcus Theatres locations. A "Ladies' Night" series began its run in late February, screening romantic comedies on Monday nights and offering drink specials at some of its theaters. The film series concept is also timed to coincide with major studio releases. Marcus Theatres prepared for the release of Furious 7 by screening the preceding titles in the franchise on weekdays.

This year has produced strong box office results so far, but Rodriguez knows the future success of the company, and exhibition industry at large, depends on maintaining sustainable growth year over year. "We can't just look at our business as a one-year success story," he says. "If you look at the history of Marcus Theatres, we've been around for 80 years, and we plan to be around for 80 more; our investments have a little more strategic philosophy to them. We have invested over $100 million into our business in the past year and a half. That wasn't necessarily intended for 2015; we believe these investments are going to be sustainable for many years to come.

"What you will continue to see with Marcus Theatres, and what you have been seeing for the last 80 years, is that we're not a ‘one-year' company-our goals are long-term. We have a base of three generations of leadership and are looking forward to continued family stewardship of the company."