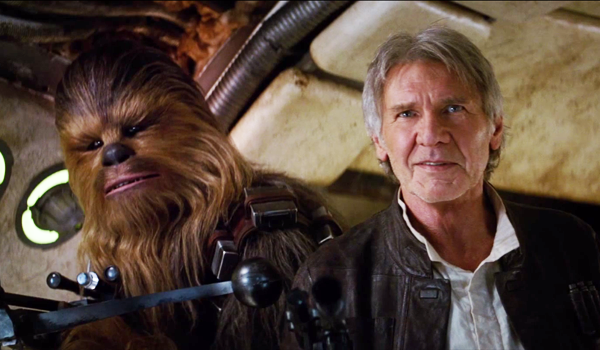 As part of the kick-off for Star Wars Celebration in Anaheim this morning, Disney and Lucasfilm have released the second teaser for Star Wars: The Force Awakens... and it's a doozy of both new horizons and welcome nostalgia. You can check it out below this story.

There are plenty of shot-for-shot breakdowns popping up across the web, but the bottom line is fan enthusiasm from the initial teaser released last November just kicked up to the next gear. After all, it's usually a good sign when a trailer release drastically bogs down (or crashes) Twitter.

What did this second reveal have in store?

A suspenseful monologue quoting memorable (and, now, foreshadowing) dialogue from Luke Skywalker in Return of the Jedi? Check.

The final shot, however, was one that fans have been waiting for: our first look at Harrison Ford's Han Solo and trusty sidekick Chewbacca in nearly 32 years.

Above all, this latest teaser does exactly what it needs to -- no more, no less. The second layer of the onion has been peeled away, giving just enough new tidbits and emphasis on character to elevate excitement without feeling like we've been spoiled in any way. Plenty of surprises and mysteries remain, but it's never been more clear how confident J.J. Abrams, Kathleen Kennedy, and their entire team are in the long-awaited seventh episode of Star Wars.

Could this be the biggest hit of the franchise's storied 38-year history? So far, we have very little reason to expect otherwise. If the final product truly delivers for the series' triple-generation-spanning fan base, the top of the all-time global box office charts might have company joining the likes of Avatar, Titanic, and Marvel's The Avengers.

Either way, it looks like Star Wars will indeed be home again come December 18. Get in line.