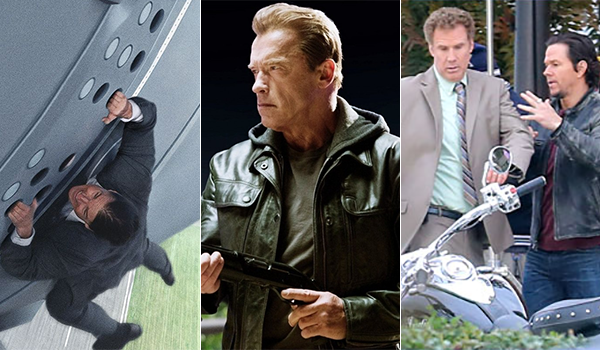 Following this morning's State of the Industry address from Chris Dodd and John Fithian, Paramount took the stage to celebrate their slate of successful 2014 (and early 2015) releases, and of course, unveil a reel of their upcoming films.

Kicking things off, Arnold Schwarzenegger himself presented 12 minutes from this summer's Terminator Genisys, set to open July 1. Although some effects shots were incomplete, the spoiler-filled footage revealed more insight into the multitude of timelines and plot threads the film is somewhat ambitiously taking on. It's still questionable whether or not casual audiences are ready for another Terminator film after 2009's Terminator Salvation proved a box office flop, and the "non-reboot reboot" approach could create some confusion for the uninitiated. Still, past franchises have aimed for similar goals (namely Star Trek and X-Men), so there's definitely potential to capitalize on introducing this franchise to a new generation. We're cautious in our expectations for now, but the action-packed footage and return of Arnold in his most iconic role shouldn't be underestimated either.

Fans of The Other Guys, take note: Will Ferrell and Mark Wahlberg are teaming up again for Daddy's Home -- a concept that finds Ferrell playing a stepfather competing (literally) for the adoration of his new step-kids when their much cooler, devil-may-care father (Wahlberg) returns home. The trailer showcased Ferrell and Wahlberg in their usual comedic form, and CinemaCon attendees were eating it up. Ferrell's recent outings, though successful, haven't quite matched up to his past box office performers, but this is definitely one to watch out for after Other Guys amassed $119 million domestically in 2010.

The main attraction of Paramount's presentation began when Tom Cruise, Simon Pegg, and Rebecca Ferguson came out to present two scenes from the upcoming fifth installment of the enduring espionage franchise. Cruise praised his co-stars and director Christopher McQuarrie (who was absent editing the flick), followed by introducing two sequences from the film. Even with unfinished editing and little-to-no musical accompaniment, the scenes further build upon the action and suspense promised by last month's first trailer.

Afterward, Cruise came back on stage with Paramount's Rob Moore to talk about the heavily-buzzed Airbus sequence. Cruise not only reaffirmed that it was entirely him performing the airplane stunt, but also elaborated on the challenges faced (e.g., he wore custom eye lenses because even the slightest grain of dust was a safety concern during shooting). He revealed that they practiced shooting the sequence eight times.

After the strong reception to 2011's Ghost Protocol, there's a lot of incoming goodwill for Rogue Nation when it opens later this summer. If the final product delivers the goods, we could be looking at another $200 million+ domestic earner. The previous film totaled $695 million globally over three years ago, a figure which also isn't out of reach for this fifth chapter.

Aside from those three, Paramount didn't have much footage to show off and instead offered up brief title cards. These included Paranormal Activity: The Ghost Dimension (October 23, 2015), Rings (November 13, 2015), Monster Trucks (Christmas 2015), Teenage Mutant Ninja Turtles 2 (June 3, 2016, which will feature fan-favorite villains Bebop and Rocksteady), Michael Bay's Benghazi thriller, 13 Hours (2016), and Adam McKay's The Big Short (2016). The latter features a star-studded line-up including Christian Bale, Ryan Gosling, Steve Carell, and Brad Pitt. Ben Stiller then appeared in a prerecorded video to push next year's Zoolander sequel, although no footage of significance was shown.

Most notably among the brief teases, director Justin Lin and producer J.J. Abrams shot a brief message beforehand to "talk" about Star Trek 3, set to release for the franchise's 50th anniversary in Summer 2016. Unfortunately, no new information was provided in the short video, which was clearly just a means of reminding everyone what Paramount's big summer movie will be *next* year.

Check back later today for coverage of Warner Bros.' presentation!