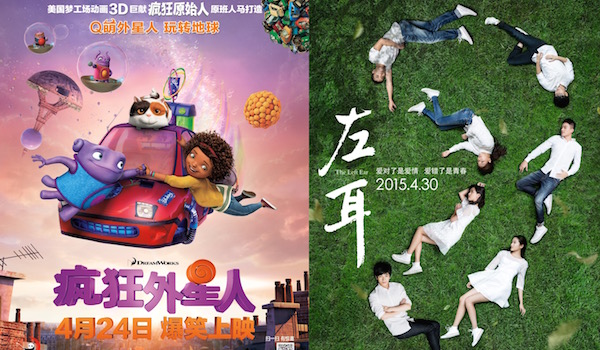 Three new contenders enter theaters this week attempting to overthrow Furious 7 from its perch atop the box office: Youthful romance pic The Left Ear (左耳), DreamWorks Animation's unexpected hit Home (疯狂外星人), and Sabotage (破坏者) starring Arnold Schwarzenegger. As Furious barrels towards the number one spot of all-time in China, do any stand a shot?

Another week, another adaptation of a popular novel aimed at the Post-80s/Post-90s crowd. Last weekend saw Ever Since We Love (万物生长) score $11.5 million, a strong opening considering Furious 7 played on more than half of China's screens for 80% of the box office total. This weekend finds The Left Ear hitting theaters to much the same buzz. The "youthful" pic is adapted from a novel of the same name penned by best-selling author Rao Xueman and follows a group of 17 year-olds through first loves, breakups, and spoiler alert: at least one main character's death. First time director Alec Su worked alongside Rao who also wrote the screenplay. Su rose to fame in the 90s as a member of a popular boy band before turning towards acting and still has a devoted following from his pop idol days. EntGroup's EFMT Index puts The Left Ear in the best position of this week's releases in terms of "awareness" and "intent to purchase", and younger viewers could be drawn in by its cast of rising (and good looking) stars.

Home flies into China following a surprisingly strong run in North America as well as overseas. Despite mediocre reviews, the DreamWorks Animation 3D pic has grossed $143 million and $272 million globally as of this writing, postponing the crisis many thought DreamWorks Animation would be in after a string of flops. Imported animated films have doubled their cumulative annual gross from 2013 to 2014 as Chinese parents are increasingly looking for family friendly fare. Accordingly, audiences not interested in the more adult-themed Furious 7 should turn out for Home this weekend. Also of note, the Chinese title for Home roughly translates to "The Wild Alien", and uses the adjective "疯狂" meaning "wild". Perhaps execs are trying to draw in fans of The Croods (疯狂原始人), a big animated hit last year, which used the same adjective in its Chinese title.

In the end, Furious 7 looks strong to retain the top spot for the third straight weekend. However, both Home and The Left Ear should be able to chip away at its dominant 80% market share from this weekend by drawing in younger audiences who've already seen the action flick and families looking for a change of pace. There's also always a chance that SARFT (State Administration of Radio, Film, and Television) could step in and incentivize theater owners to give more play to domestic pics, in which case The Left Ear and Ever Since We Love would see a bump in attendance.