CinemaCon 2015: Disney Sticks to the Basics with 'Star Wars: The Force Awakens', 'Tomorrowland', & 'Ant-Man' Trailers Ahead of 'Inside Out' Screening 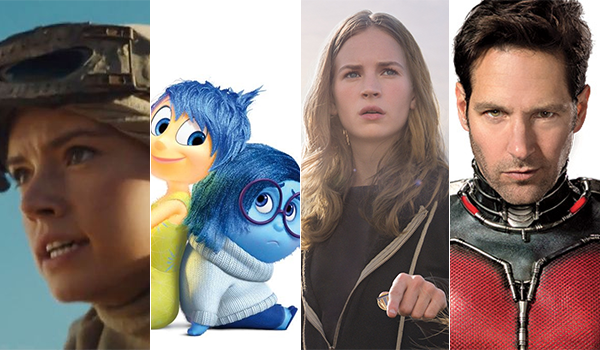 Disney's presentation at this year's CinemaCon was short and sweet. Dave Hollis, the studio's Executive Vice President of Distribution, took the stage to briefly talk about how the company's brands are at last coming together over the next couple of years -- namely, long anticipated projects from Marvel, Pixar, Lucasfilm, and Disney's own in-house productions.

No new information was provided for the big guns, unfortunately. Hollis suggested that early overseas box office results for Avengers: Age of Ultron are already indicative of another hit (no surprise), while foregoing a chance to show off the trailer or anymore new footage. Sticking with Marvel for a few more moments, the newest Ant-Man trailer played to a fairly receptive crowd. It'll be interesting to see how Disney and Marvel push the film once Ultron's out of the way.

The newest Tomorrowland trailer (below) was also screened, peeling away a few more of the film's first act developments and further establishing the relationship between George Clooney and Britt Robertson's characters. Not much was shown from Tomorrowland itself in the trailer, but that's surely to keep as much mystery intact as possible. This presents a lot of marketing challenges for an original film with no built-in audience outside of Disney fans, but director Brad Bird has a strong resume thus far. Expect a relatively modest opening weekend in May, with strong potential for legs throughout summer if the film clicks with audiences.

And of course, Disney would have been remiss not to screen the second teaser for Star Wars: The Force Awakens, which launched last) Thursday as part of Star Wars Celebration in Anaheim. Hollis noted that the teaser was viewed an astounding 88 million times (between the live stream and YouTube) within its first 24 hours of availability, further highlighting the massive enthusiasm fans and casual viewers alike are embracing for long-anticipated franchise continuation.

Aside from those key films, news of previously announced titles were briefly covered. Emphasis was placed on 2015 being the first time two Pixar releases have ever opened in the same year, although November's The Good Dinosaur was otherwise absent from the presentation (aside from its logo placed on the 2015 timeline graphic Disney prepared in advance). Hollis also noted the next Disney Animation release, Zootopia, set for release in March 2016, as well as November 2016's Moana. On the live action front, Steven Spielberg's Tom Hanks Cold War drama, Bridge of Spies (October 16, 2015) was briefly noted.

All in all, considering the massive slate Disney has coming up over the next years, the presentation itself was devoid of any new information or footage, but this simply may be pointing to the studio's confidence and lack of need to show anything.

The presentation closed with a screening of Pixar's Inside Out, from Up and Monsters, Inc. director Pete Docter. The film played extremely well with the CinemaCon crowd and offers plenty of the classic Pixar charm and depth that should make it one of this summer's biggest domestic and global box office hits. It was also announced that the film will screen in theaters nationwide three days ahead of its wide release in June as part of a promotion with Fathom Events, featuring a live Q&A with Amy Poehler after the film.