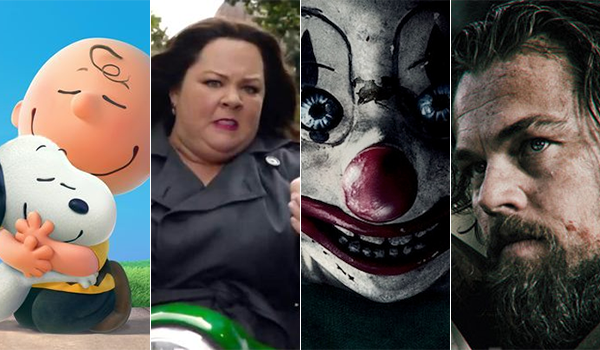 The penultimate studio presentation of CinemaCon 2015 belonged to Fox, and following a tremendous 2014 at the box office, they certainly put on a show highlighting their upcoming slate.

Kicking off the morning was an impressive introduction by DJ Enferno and a dance group taking the stage to the former's remix of the classic Peanuts theme, which was the first film highlighted in the presentation. Debuting a new trailer built as much around nostalgia (opening to the tune of The Who's "Teenage Wasteland") as it was introducing a modern representation of the classic Charles M. Schulz comic strip faithfully being brought to the screen. Every piece of marketing thus far has hit the right notes for anyone old enough to remember reading, so it's only a question of whether or not the youngest generation of kids will be interested. It's hard to bet against the confidence behind Peanuts though, and this is poised to be one of the biggest hits of the holiday season (if not the year).

Backtracking to the start of the summer slate, the latest Poltergeist trailer played to great reactions among the CC crowd. It's been awhile since we've seen a horror hit big at the box office, and the remake of the classic 80s flick has been trending well. A domestic run between $80 million and $100 million doesn't seem far-fetched for the May 22 release.

Next up, June 5's Spy continued to drum up buzz as the trailer still caught a lot of attention despite the film screening for the convention audience earlier this week. Writer/director Paul Feig and Melissa McCarthy have another R-rated comedy hit on their hands following Bridesmaids and The Heat, and word is that the ensemble cast of Jason Statham, Rose Byrne, and Jude Law will be just as much reason for strong word of mouth with scene-stealing moments alongside the film's anchoring star.

Paper Towns, set for a July 24 release, is certainly carved from the same young adult dramatic mold as The Fault In Our Stars (both being adaptations of John Green books). The new trailer provides a tone that could be accessible to more than just teenagers, but it would be asking a bit to much expect the same level of box office success as Fault enjoyed last summer. Paper Towns is certainly a flick to keep an eye on.

The new trailer for Fantastic Four made its CinemaCon debut as presented by the four main cast members. In a climate where Marvel and DC are already going head-to-head vying for the lion's share of audience attention in the superhero realm, a reboot of a series that launched only ten years ago has plenty of uphill battles to face. Still, the shift in tone and cast led by Miles Teller, Kate Mara, Michael B. Jordan, and Jamie Bell look like a fresh approach to the property.

Also debuting trailers were Hitman: Agent 47 (August 28), Maze Runner: The Scorch Trials (September 18), and Victor Frankenstein (October 2). The second of that group looks to expand the on-screen world of the successful first adaptation and should be another solid for the post-summer box office market. With stars like James McAvoy and Daniel Radcliffe, Victor Frankenstein offers a new take on the classic monster legend, but we'd like to see more of the film before speculating on box office prospects.

Moving into the holiday season, Fox showed just how well-stocked their end-of-year pile is. The global premiere of footage from Ridley Scott's The Martian adaptation was presented (via video) by star Matt Damon. Following the success of movies of like Gravity and Interstellar, audiences may still be hungry for another dramatic sci-fi adventure bolstered by a strong ensemble cast, and we're excited to see what else the film has to offer as its November 25 release approaches.

A teaser for Alvin and the Chipmunks: The Road Chip debuted, parodying the Hangover films in the process. The franchise dropped off at the box office with the third film recently, but there may still be a decently sized family audience for a fourth entry around the holidays.

The final two trailer debuts in Fox's presentation were clear awards contenders for the studio which has won the last two Best Picture Oscars, although both featured raw footage for the most part. David O. Russell's Joy (opening December 25) showed off its large ensemble led by Jennifer Lawrence, Bradley Cooper, Robert de Niro, and Edgar Ramirez. Representing a definite shift in style from Russell's past couple of films, it'll be interesting to see whether the filmmaker and frequent cast collaborators continue to appeal to mainstream crowds the way they have over the last few years.

Last up, CinemaCon attendees were given the first glimpse at Alejandro González Iñárritu's Birdman follow-up, The Revenant. A tale of adventure, survival, and revenge, the footage was preceded by notes that it's still in production and, impressively, is making use of strictly natural light under the guidance of cinematographer Emmanuel Lubezki (winner of the past two Oscars in his field). We were given glimpses of Leonardo DiCaprio and Tom Hardy roughing it up in the picturesque Canadian wilderness, in addition to quick shots of several action sequences. It's early in the game to make concrete predictions, but it's hard to imagine this film, its director, cinematographer, and leading man Leo not representing forces to be reckoned with on the awards circuit later this year. The Revenant is slated to open Christmas Day.

CinemaCon closes out later today with Universal bringing the final studio presentation to stage. Check back later for our analysis.