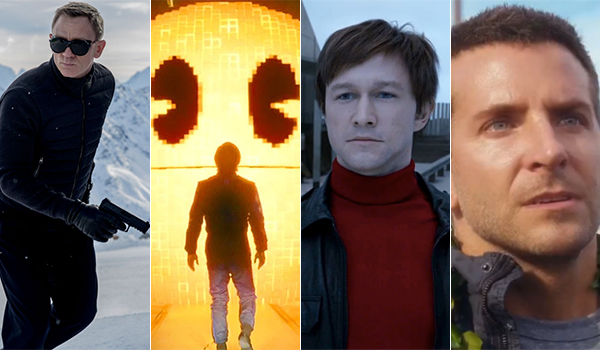 Sony wrapped up Wednesday's round of studio presentations with an impressive look at their 2015 slate, as some teases for 2016 and beyond.

Their next release on the calendar is Cameron Crowe's Aloha, set to release on May 29. Featuring an all-star ensemble that includes Bradley Cooper, Emma Stone, Rachel McAdams, Alec Baldwin, Jon Krasinski, and more, our previously conservative expectations for its box office potential are definitely moving upward. In a summer crowded with big blockbusters and action flicks, this dramedy is looking like just like the kind of fare adults will be looking for -- something Crowe has made a career of specializing in.

The studio's confidence in Pixels couldn't be higher right now. In fact, the presentation setup was largely themed after the film with old school arcade machines lined up outside the auditorium. Director Chris Columbus came out to present the newest trailer for the film, highlighting the scale of a summer blockbuster coupled with family-accessible comedy that Adam Sandler, Kevin James, and co. are known for. If the pic's momentum keeps heading in this kind of northward direction, Pixels will undoubtedly pan out to be one of the summer's biggest hits.

Next up, the first look at Ricki and the Flash premiered for the crowd. Meryl Streep takes the lead as a rock star mom who wasn't around for her daughter's childhood. Her fan base will be pleased to see the venerable actress taking on yet another role that only Meryl could bring to the screen in such a way. With an August 7 release, the film will hope to pull adult crowds as summer begins winding down.

Also debuting first trailers tonight were The Perfect Guy and Hotel Transylvania 2. The former takes a page from the book of recent films like No Good Deed and The Boy Next Door, so a box office performance somewhere between them seems reasonable. As for the animated sequel, Hotel Transylvania 2 looks to offer up more of the family-driven hijinks of the first film.

Moving into the final quarter of 2015, Robert Zemeckis was on hand to present the newest trailer for The Walk, starring Joseph Gordon-Levitt. The true story, World Trade Center high-wire act looks like yet another winner in the director's long and successful career, and could even be an awards contender. With a mix of dramatic flair and lighter character-driven moments, the flick is a sure fire box office success in wait.

Also scheduled for this fall, October 16's Goosebumps adaptation showed off first footage this evening. Jack Black will be a draw among family crowds, as will the nostalgia factor (noting a theme?), but the early preview featured unfinished footage and doesn't give a clear indication of how well it will compete in a fairly tough autumn market.

The Seth Rogen/Joseph Gordon-Levitt Christmas comedy now has a title: Xmas. Fans of the two leads have a lot to be excited about as the first trailer falls right in line with the tone of This Is the End, Neighbors, and other comedy hits audiences have embraced recently. The first title card of the trailer summed that up all its own: "from the guys who almost brought you The Interview". Timed perfectly for the season with its November 25 release, Rogen may have another $100 million+ hit on his hands.

The first clip from Concussion made its debut, featuring a dramatic monologue by Will Smith as gives a convincing reason why he could be contending for leading man awards later this year. Unfortunately, there wasn't anything more than the standalone scene, but it does set an interesting tone for the narrative centered around controversial true-to-life deaths caused by football head injuries. We'll wait for a more concise trailer before speculating too much about box office prospects.

The first look at The 5th Wave provided a glimpse at the next young adult property aiming for success. Boasting star Chloe Grace Moretz, the film isn't set to release until January 15, 2016, but the end-of-the-world/alien invasion premise could go either way as audiences become introduced to more and more of these young adult adaptations.

In addition to an early trailer for Money Monsters, starring George Clooney and Julia Roberts, the studio announced that Phil Lord and Chris Miller (the Jump Street and LEGO series) will take on a fully animated Spider-Man movie, set for release on July 20, 2018. The film is not expected to tie into the Marvel Cinematic Universe like Sony's 2017 live action Spider-Man flick will.

Last but not least, a special preview for Spectre closed out the evening with a brief intro from director Sam Mendes. Without delving into the minor spoiler revealed in the clip featuring Daniel Craig and Naomie Harris' Moneypenny, the 24th Bond flick certainly carries over Skyfall's atmospheric and dramatic tone. It's becoming more and more clear that Spectre, at least partially, is designed to continue a sense of continuity throughout Craig's tenure in the role so far. That bodes very well for box office prospects, although realistically, it's going to be very difficult to capture the kind of synergy enjoyed by the last film thanks to the 50th anniversary of the franchise in 2012. Still, Spectre is already well-poised to be one of the biggest blockbusters of the franchise and of the holiday season.

Check BoxOffice on Thursday as CinemaCon wraps up with Fox and Universal taking the stage.