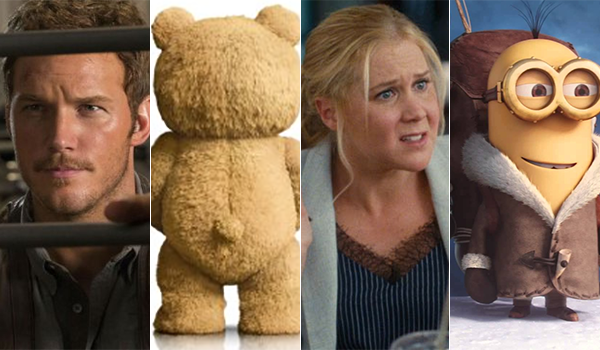 Closing out CinemaCon for 2015, Universal made the final presentation of the week by beginning with a tribute to its successful 2014 and early 2015. Most notably, Vin Diesel himself took the stage to give thanks for the massive success of Furious 7, followed by his personal announcement that an eighth installment in the increasingly popular franchise is officially on its way for an April 14, 2017 release.

Diving into this year's slate, Pitch Perfect 2 was again showcased after a screening of the film itself to attendees earlier this week. Seth MacFarlane then presented a new Ted 2 trailer, and if the CinemaCon crowd's reactions were any indication, it looks to avoid many of the traps of sequels (comedy sequels especially) -- good news for box office prospects as the flick will hope to try and duplicate the near-$550 million global total of the first film.

Amy Schumer then presented Trainwreck, her starring and writing vehicle from director Judd Apatow. This is another summer comedy that continues building buzz with each preview release, and looks primed to capture the same audiences that turned previous Apatow-related flicks like Knocked Up and Bridesmaids into summer smashes. Without much question, this should be a star-making role for Schumer.

In a surprise announcement/appearance, producer Jason Blum and writer/director M. Night Shyamalan presented the latter's latest original thriller, The Visit. Despite a streak of box office duds, the filmmaker may have something quite unique on his hands here. The first trailer shows off his trademark suspense mixed with a devilishly twisted sense of humor that isn't quite like anything he's put on screen before. We're eagerly awaiting further previews of the flick scheduled for a September 11 release.

The Crimson Peak and Straight Outta Compton trailers were warmly met, as were the trailer debuts for Everest and Sisters. Unfortunately, and somewhat surprisingly, there was little mention of the well-publicized Steve Jobs biopic, which is currently still set for release on October 9.

The Minions trailer screened toward the end of the presentation, and fans of the title henchmen will no doubt be turning out to theaters for that prequel this summer. Still, it seems unlikely the film will capture the juggernaut-like box office performance of Despicable Me 2 -- but it doesn't need to.

In a world premiere, the first footage of The Secret Life of Pets (Illumination's first original project since Despicable Me) screened to a very enthusiastic crowd. Featuring comedic acts like Louis C.K., Kevin Hart, and Eric Stonetreet, the concept alone screams "wide audience appeal" as it questions what pets do all day when their owners leave home. Universal has enough confidence in it that they've delayed its release to the key summer spot of July 8, 2016 where the Despicable Me franchise has found massive success.

To cap things off, Chris Pratt and director Colin Trevorrow presented the newest Jurassic World trailer, and it promises the kind of summer action mayhem audiences will be hoping for from the popcorn flick. The franchise has yet to duplicate the same human element that helped drive the phenomenal success of Steven Spielberg's original 1993 classic, but a new generation to frighten and a sense of nostalgia could certainly help propel World to become one of the summer's biggest global box office hits.

Check BoxOffice in the days and weeks ahead as we further break down the upcoming summer releases looking to make a big splash both domestically and worldwide.