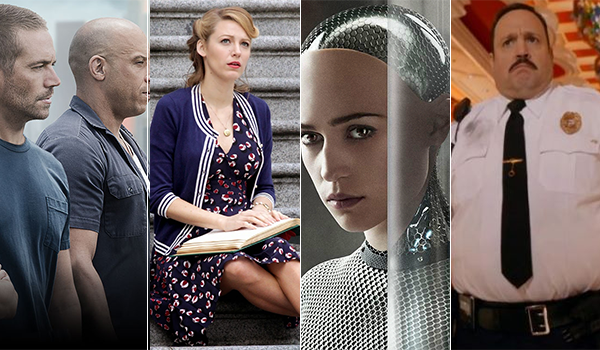 Sunday Update: Universal's Furious 7 took in an estimated $18.26 million this weekend to lead the weekend box office for a fourth consecutive frame. In doing so, Furious 7 became the first film to lead the box office for four consecutive weekends since The Hunger Games did so back in 2012. The seventh installment of the blockbuster franchise featuring Vin Diesel, Dwayne Johnson and the late Paul Walker was down 37 percent from last weekend. Furious 7 was aided a bit this weekend by moviegoers who wanted to catch the film before Disney's highly anticipated Avengers: Age of Ultron debuts in theatres this coming Friday. Furious 7 has grossed a massive $320.54 million in 24 days. That places the film a very impressive 46 percent ahead of the $219.72 million 24-day take of 2013's Fast & Furious 6.

Paul Blart: Mall Cop 2 held steady in a not-so-distant second place with an estimated $15.5 million. Sony's modestly budgeted Kevin James led comedy sequel fell 35 percent from last weekend's debut. Paul Blart: Mall Cop 2 has grossed a solid $43.95 million through ten days of release. The film continues to run in line with pre-release expectations and is running 4 percent ahead of the $42.38 million ten-day start of 2011's Zookeeper (which fell 38.5 percent in its second weekend to gross $12.33 million). Despite very poor critical reviews, Paul Blart: Mall Cop 2 will hope to hold up well going forward due in part to facing a relatively limited amount of new competition for family audiences.

Home grossed an estimated $8.3 million to remain in fourth place this weekend. The successful 3D computer animated film from Fox and DreamWorks Animation was down a slim 22 percent from last weekend. Home continues to exceed expectations in a big way with a 31-day take of $153.78 million. That places the film just behind the $154.63 million 31-day take of 2013's The Croods.

Universal's Unfriended rounded out the weekend's top five with an estimated $6.24 million. The ultra low-budget horror film from Blumhouse Productions was down two spots and a sharp 61 percent from last weekend. Unfriended has grossed $25.15 million in ten days. While Unfriended isn't quite living up to its break-out potential, it is still performing well with its cost in mind. Unfriended is running 28 percent behind the $34.80 million ten-day take of last year's Ouija (which fell 46 percent in its second weekend to gross $10.74 million).

Elsewhere in semi-wide release, Little Boy debuted all the way down in 13th place with an estimated $2.83 million. The modestly budgeted family comedy from Open Road earned a respectable per-location average of $2,708 from 1,045 locations. Little Boy was especially front-loaded this weekend; the film opened with $1.35 million on Friday, decreased an alarming 41 percent on Saturday to gross $0.80 million and is estimated to fall 15 percent on Sunday to gross $0.68 million. That gives the film an estimated opening weekend to Friday ratio of just 2.10 to 1, which isn't a good early sign for the film going forward.

Saturday Update: Lionsgate reports that The Age of Adaline claimed first place on Friday with a healthy $4.96 million. That's just 10 percent below the first day of The Longest Ride, which is respectable given Adaline's lack of a built-in fan base as well-established as that of Nicholas Sparks. The film has similarly modest early word of mouth with a 72 percent audience score on Rotten Tomatoes, while critics gave it a 53 percent. BoxOffice projects $13.5 million for the weekend in third place.

In second place Friday, Furious 7 eased 42 percent to $4.8 million. That brings its domestic haul up to a staggering $307.1 million in 22 days of release. Universal is projecting a $16.3 million, which we think will land it a fourth consecutive weekend box office crown.

In third place yesterday, Paul Blart: Mall Cop 2 added $3.75 million, down 49 percent from opening day last week. With $32.2 million in the bank through 8 days of release, the film is pacing 34 percent behind its predecessor, but is still performing well overall. BoxOffice projects a $13.6 million sophomore frame in second place.

Ex Machina pulled an estimated $1.71 million as it expanded into 1,255 theaters for wide release this weekend. The strongly reviewed sci-fi film (90 percent) is also generating great word of mouth among viewers (89 percent). It'll be interesting to see how the film holds up from here. BoxOffice projects a $4.5 million weekend.

The Water Diviner took in $374,000 from its limited 320 location opening yesterday, scoring an "A-" CinemaScore in the process. The Russell Crowe-led and -helmed flick could net around $1 million this weekend.

Friday Update #2: Sources tell BoxOffice that Furious 7 should have no problem staying #1 with more than $16 million. The Age of Adaline will be in second with $13 million.

Friday Update #1: Lionsgate reports that Age of Adaline earned $575K from Thursday evening shows. To put that into perspective, The Boy Next Door--another film that skewed heavily female--posted $500K on its way to a $14.9 million opening weekend.