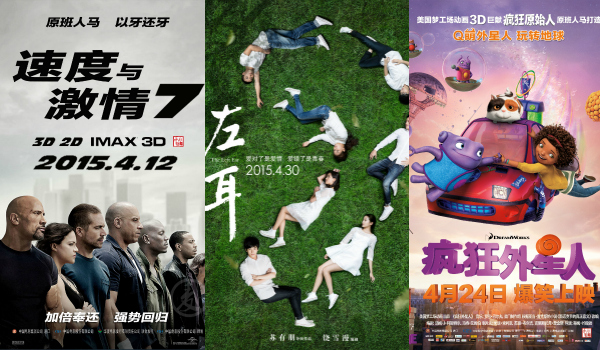 Furious 7's grip loosened on the Chinese box office this weekend, dropping 61% from last week to gross $35.14 million, but it still held on to the top spot for the third consecutive weekend, edging out newcomer The Left Ear's (左耳) respectable $31.19 million. Furious grabbed 42% of the market this weekend, down from 82% last weekend. Sometime on Sunday, Furious became the first movie ever in China to cross the 2 Billion RMB mark and in doing so surpassed Transformers: Age of Extinction as the highest grossing film in Chinese box office history. After just 15 days of release, the seventh installment of the Fast & Furious series (an eighth was just announced for April '17, to the delight of Chinese fans) has earned $323.33 million surpassing the estimated 24 day North American total of $320.5 million. While several films have grossed more in China than they did stateside (The Expendables 3 - $72.66 million vs $39.32, Need For Speed $66.19 million vs $43.57 million, this is only the second time it has happened with a bonafide successful blockbuster in both markets. (Transformers 4 was the first).

Targeted squarely at the Post-80s/Post-90s crowd, The Left Ear earned a decent $31.19 million to take second place in its first weekend of release. The youthful pic outgunned rival Ever Since We Love (万物生长) which dropped 74% to fourth place with $2.88 million. After ten days, the film has grossed $21.84 million.

In third place, Dreamworks Animation's Home opened to $7.96 million. The film played on about 15% of China's screens this weekend and was able to attract family audiences as the only kid friendly wide release. Home is 23% ahead of The Croods which ended up with $63.5 million in 2013, but that total seems unlikely for Home with a crowded market the next few weekends. Rounding out the top five was Arnold Schwarzenegger's Sabotage which opened with $2.47 million. Arnie will look to make a dent at the box office next with Terminator Genisys opening in China on July 1.

The rest of China's top ten can be found below with data from EntGroup Consulting. 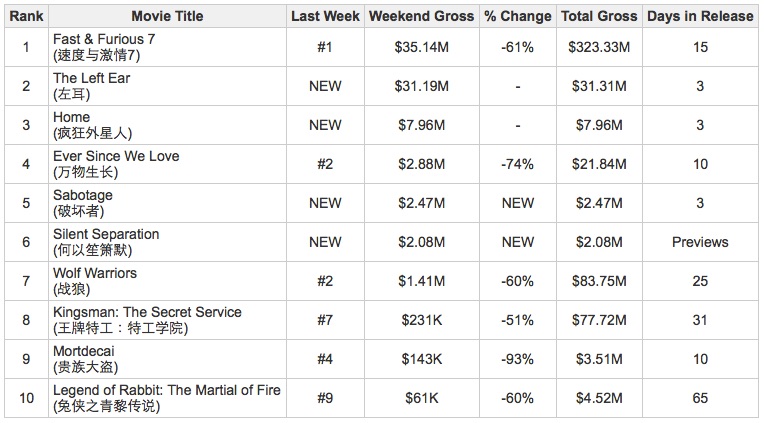