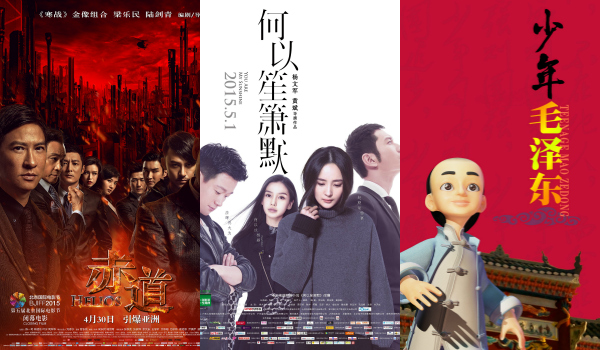 With Furious 7's dominance at the box office finally starting to fade, nine new films enter cinemas for a crowded Labour Day holiday weekend as the market looks to bounce back with a domestic hit.

Although mainland interest in Hong Kong productions has waned in recent years, directors Lok Man Leung and Kim-ching Luk will try to repeat the performance of their 2012 action flick Cold War (寒战), which grossed over $40 million, with their second joint effort, Helios (赤道). The doomsday thriller is being praised for its strong action scenes and technical level and boasts an impressive pan-Asian cast in Jacky Cheung (July Rhapsody), Nick Cheung (Unbeatable) Choi Si-won (Dragon Blade), and Zhang Zhen (Happy Together).

Murmur of the Hearts is a holdover from two weeks ago and may have lost some of its heat after it was postponed trying to avoid Furious 7's hot ticket. Despite garnering the best "word of mouth" according to EntGroup's EFMT Index, the artsy film's methodical narrative and leaps in editing may have trouble attracting a mainstream audience this weekend.

However, Silent Separation will do some damage at the box office. Following a trend seen the past few weeks, this youthful pic is based on a novel of the same name and was also adapted into a TV series before hitting the big screen. It's built-in fan base could come out in droves to support the young good-looking cast of Tong Dawei, Huang Xiaoming and real-life girlfriend Yang Ying (Angelababy). EntGroup's EFMT Index gives Silent Separation the highest marks for "awareness" and "intent to purchase" this weekend.

In a field oversaturated with youthful romance pics, we see Helios as a big draw this weekend, but Silent Separation and The Left Ear could pull in decent totals as well. Furious 7 won't put up the same staggering numbers as it has the past three weekends, but it will still place in the top 5, and Home should have strong legs considering it's the only family friendly pic out there this holiday weekend (no disrespect, teenage Chairman Mao).