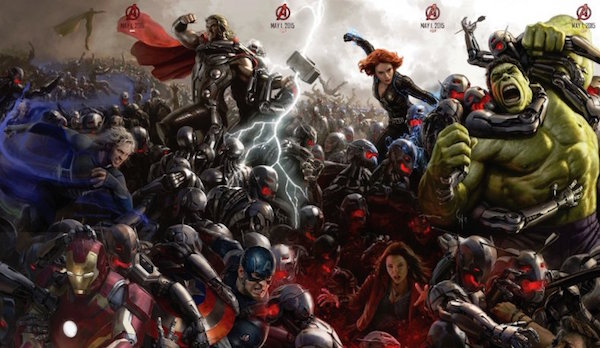 Ultron was the top movie in all 88 territories this weekend and dropped off only 37% from last weekend. It continues to dominate in Asia where it opened it Thailand to the 2nd biggest weekend ever for $7.4 million. South Korea is the top international market for Ultron (perhaps thanks to that high speed chase through downtown Seoul) with $55.4 million after two weekends. Russia is up to $27.2 million and has already passed the lifetime cume of the original Avengers. Despite most of country watching the fight of the century, the Philippines found time to make Ultron the third biggest movie of all time with $12.0 million behind Marvel’s Avengers and Iron Man 3.

Ultron also rolled out in most of Latin America this weekend with Mexico and Peru taking their biggest industry opening weekends of all times. It grabbed 92% of the market share in Mexico for $25.5 million. Elsewhere, Columbia and Peru both more than doubled their opening weekends from the original Avengers, and Brazil dropped off only 11% in its second weekend for a $29.5 million total.

On the overseas IMAX front, Ultron picked up a cool $7.2 million on 221 screens in 50 countries for an international cume of $22 million. Mexico ($25K/screen), Ecuador ($40K/screen), and Egypt ($100K/screen) delivered their best weekends ever for IMAX.

Chinese filmgoers are eagerly anticipating Ultron’s release on May 12, and Japan will see the Avengers on its screens in July.

The seventh installment in the Fast series continued to lead the market in China for a third consecutive weekend as it fell just 22% thanks to the Labour Day Holiday to gross $28.1 million for a 22-day total of $375 million. Furious still has one more weekend to break $400 million before Age of Ultron hits theaters on Tuesday, May 12.

Cinderella is taking her last dance in Japan, but still managed to waltz up $7.0 million from 33 territories. She’s now crossed the $300 million overseas mark and will look to pass $0.5 billion globally in the coming week.

Unfriended scared up $3.9 million from 9 territories this weekend. Combined with a light rollout the past two weekends in the Baltic, its international tally is up to $4.08 million and its worldwide cume is $33 million. The tweeny social media thriller opened in 2nd place in both the UK and Ireland ($2.1 million) and Australia ($994k). Unfriended will expand internationally in the following months with South Korea next to open up on May 7.

Thomas Vinterberg’s Far From The Madding Crowd opened at #2 in the UK with $2.12 million. Combined with the two week total from Vinterberg’s native Denmark, the adaptation has grossed $2.55 million overseas and $2.74 globally after one weekend of limited release in the States.

Warner Bros’ Focus crossed $100 million this weekend with its opening in Japan where it found $1.0 million from 235 screens. The film stands at $154.35 million globally.