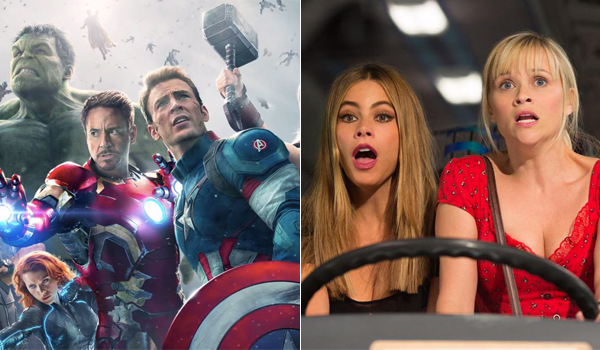 This weekend's hold isn't the most encouraging sign going forward for Avengers: Age of Ultron, especially given that last Saturday's performance was deflated by that day's much talked about sports events and that the film will be facing much tougher competition throughout the rest of May than The Avengers did back in 2012. With that said, Avengers: Age of Ultron has already grossed a massive $312.86 million in ten days, which stands as the third largest ten-day start ever (behind only The Avengers and 2008's The Dark Knight). Avengers: Age of Ultron is currently running 16 percent behind the $373.07 million ten-day take of The Avengers and 10 percent ahead of the $284.95 million ten-day gross of Iron Man 3.

Avengers: Age of Ultron took in an estimated $6.4 million from IMAX locations this weekend. That represented 8.3 percent of this weekend's overall gross and brings the film's current total domestic IMAX gross to just over $29 million.

Warner's Hot Pursuit debuted in a distant second place with an estimated $13.3 million. The comedy from MGM and New Line starring Reese Witherspoon and Sofía Vergara opened below pre-release expectations. The film had hoped to receive an added boost from opening on Mother's Day weekend, but the film's potential was clearly limited by very poor critical reviews and by opening only one week before Universal's highly anticipated Pitch Perfect 2 arrives in theatres. Hot Pursuit debuted 24 percent below the $17.41 million three-day take of 2012's This Means War and 5 percent below the $13.95 million start of 2011's Something Borrowed.

Hot Pursuit opened with $4.2 million on Friday (which included an estimated $450,000 from Thursday evening shows), increased 17 percent on Saturday to gross $4.92 million and is estimated to decline just 15 percent on Sunday to gross $4.19 million. That places the film's estimated opening weekend to Friday ratio at 3.17 to 1, though the Mother's Day holiday obviously aids that figure. In addition to facing tough competition from Pitch Perfect 2, Hot Pursuit is likely to be hurt by poor word of mouth going forward, as the film received a soft C+ rating on CinemaScore.

The Age of Adaline took in an estimated $5.6 million this weekend. That represented a decline of just 10 percent from last weekend, as holdovers in general were helped out this weekend by last Saturday's deflated grosses, Mother's Day on Sunday and the limited amount of new competition that entered the marketplace. The Age of Adaline has grossed $31.53 million in 17 days. The romantic drama starring Blake Lively is running 4 percent ahead of the recent $30.29 million 17-day take of The Longest Ride.

Furious 7 placed in fourth with an estimated $5.27 million. The sixth installment of the blockbuster action franchise was down a very healthy 21 percent from last weekend. Furious 7 has grossed $338.42 million through 38 days of release. That places the film an exceptional 45 percent ahead of the $233.35 million 38-day take of 2013's Fast & Furious 6.

Paul Blart: Mall Cop 2 followed closely behind in fifth with an estimated $5.19 million. The Kevin James led comedy sequel was down a slim 12 percent from last weekend. Paul Blart: Mall Cop 2 has grossed a solid $58.07 million in 24 days. The film is running 16 percent behind the $68.83 million 24-day gross of 2011's Zookeeper.

A24's Ex Machina held up very nicely upon expanding into wider release this weekend. The critically acclaimed Alex Garland directed sci-fi film placed in sixth with an estimated $3.47 million. Thanks in part to strong word of mouth and expanding into an additional 725 locations, Ex Machina was up an impressive 52 percent over last weekend. Ex Machina has grossed $15.72 million in 31 days.

Saturday Update: Disney reports that Avengers: Age of Ultron added another $21.34 million to its haul on Friday, representing a 75 percent drop from its opening day-plus-Thursday combo last week -- slightly sharper than the drop (-71.4 percent) Iron Man 3 experienced on its second Friday two years ago. To date, that gives Ultron $257 million in the domestic bank, putting it nearly 11 percent ahead of the pace of Iron Man 3 and 14 percent off the pace of the first Avengers. With Mother's Day coming up this weekend, plus last Saturday's deflated market due to the busiest sports day of the year, it's possible this weekend could bounce back a bit for the Marvel blockbuster. For now, BoxOffice is projecting a $78 million weekend.

Hot Pursuit bowed in second place with a modest $4.2 million yesterday. That's well off the opening day figures of recent lady-led comedies like The Other Woman ($9.3 million). While Mother's Day and the respective fans of Reese Witherspoon and Sofia Vergara have been expected to boost interest in the film this weekend, unfortunately, the MGM/New Line production (distributed by Warner Bros.) garnered a disappointing "C+" CinemaScore, one of the lowest Rotten Tomatoes/Flixster audience scores of the year at 48 percent this morning, and a disastrous 6 percent score from RT critics. BoxOffice is projecting $12.9 million for opening weekend.

The Age of Adaline claimed third place yesterday, easing 31 percent from last Friday to $1.53 million. With $27.5 million in the bank through 15 days of release, look for a third weekend frame around $4.9 million.

Furious 7 landed in fourth on Friday with another $1.4 million, off 36 percent from the same day last week. The blockbuster's domestic cume now stands at $334.55 million. BoxOffice projects a $5.0 million weekend.

Filling out the top five, Paul Blart: Mall Cop 2 tacked on another $1.23 million, off 31 percent from last Friday. The Kevin James sequel's tally is now $54.1 million and should land around $5.1 million this weekend.

Friday Update #1: Sources report that Hot Pursuit grabbed an estimated $450K from last night's early shows.  That's a fair start for the comedy starring Reese Witherspoon and Sofia Vergara heading into Mother's Day weekend. The two starlets have done their best to promote the film among their diverse fan bases as the flick hopes to counter-program the sophomore frame of Avengers: Age of Ultron.