GLOBAL REPORT: 'Pitch Perfect 2' Hits Right Notes Down Under; 'Ultron' Up To $875M Worldwide Ahead of China Release 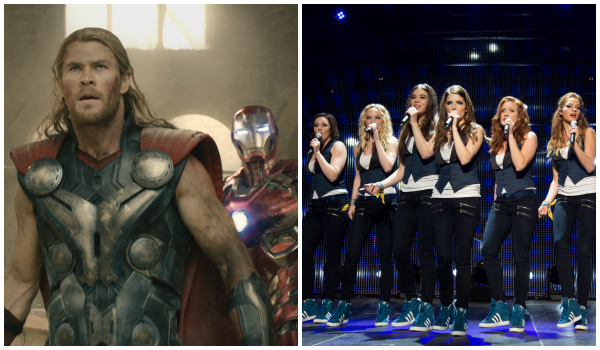 On the IMAX front, Ultron scored $3.1 million on 220 overseas screens, raising the international cume to $28 million and the worldwide cume to an estimate $57 million.

Up next is a huge opening in China on Tuesday (May 12) when nearly 90% of the Middle Kingdom’s 25,000 screens will be playing Ultron. Despite a less than ideal mid-week opening, the majority of midnight IMAX showings have sold out and half of China’s IMAX screens have added 3 am screenings. Follow BoxOffice.com’s China section for updates as numbers begin to roll in.

Fast and Furious 7 isn’t out of gas yet, racing to $19.6 million from 67 territories this weekend for an overseas total of $1.128 billion and a worldwide total of $1.466 billion. The push for $400 million from China will come up just short as Furious ends its run on Monday ahead of Ultron’s opening with an estimated total of $388 million through Sunday. It is the highest grossing film of all time there as well as in Argentina, Colombia, Ecuador, Indonesia, Malaysia, South Africa, United Arab Emirates, Uruguay, Trinidad and Vietnam.

Pitch Perfect 2 hit all the right notes in Australia and New Zealand, deposing Ultron on its way to an $8.8 million opening weekend. Audiences Down Under embraced the acappella themed comedy sequel with $7.6 million, 348% ahead of the original’s 2012 opening of $2.18 million. Australia went on to be the film’s top performing overseas territory with more than $13 million. In New Zealand, the sequel grabbed more than half the market share for $1.2 million which is the third biggest opening weekend this year behind Furious and Ultron. Pitch Perfect 2 opens in North America next weekend along with 27 other international markets including the UK, Germany, Russia, and the Philippines.

Home cozied up to $6.0 million from 35 markets this weekend lifting the international cume to $180.22 million and the global tally to $342.33 million. The DreamWorks Animation pic is tracking 13% ahead of Cinderella in the UK/Ireland and picked up $632K this weekend for a $33.92 million cume.

Unfriended scared up $3.2 million from 11 territories this weekend, including a third place opening in South Korea with $1.0 million, and a top four finish in its second weekend in the UK with $1.2 million ($4.4 million cume). The tween skewing social media thriller is in the early stages of an international rollout and next up is Thailand on May 21.