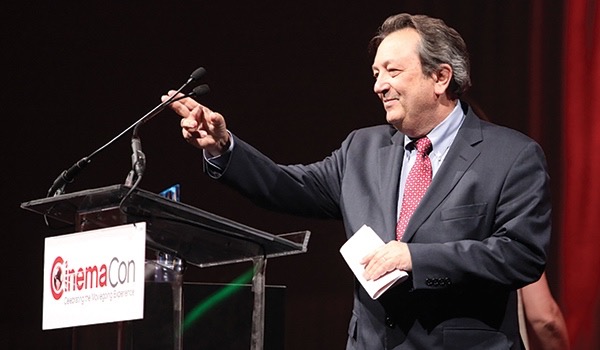 Your involvement in exhibition began as an usher at a movie theater. Were there any early lessons your learned from that experience?

One of the key focuses at that level is the guest, and if you keep that in mind throughout your career-that this is about the guest experience-then that influences everything that you do and the decisions that you make. I always look at the exhibition business as multiple businesses: it's a real estate business; in terms of dining options and food service, it's a hospitality business; it's about showmanship and the movies. You need to keep all those things in mind. Where you locate your theater, what kind of building you have, what amenities you add-you learn that from the ground up when you greet the guests and cut their tickets.

You've worked in a number of different sectors in the industry-sales, booking, distribution-and you went back to exhibition. What brought you back to this side of the business?

I was both a distributor and an exhibitor, and in my last iteration I was more on the technology side, working between exhibition and distribution. Exhibition has a special place for me, because I think it's more entrepreneurial. It allows you to challenge yourself on a lot of different fronts in terms of staying ahead of the industry. In distribution, a lot of these things stay out of your entrepreneurial realm. You're given a slate of films, so you're dealing with the given, whereas with exhibition you can make decisions that affect change. That's quite appealing to me, to make a decision that influences the other parts of the business.

You have international experience as well, not only with your work in Canada but with UCI. What are some of the lessons you've learned from the global marketplace, which has grown from an ancillary part of the business to a leading influencer?

I think that exhibition around the world has to be regarded as multiple local businesses. The one thing that you learn quite early when you take on a multinational job is to not paint everything with the same brush. You have to really listen to the local operators, customers, and competitors. The differences are vast throughout the world. You have to really take account of the local cultures and people and the local appetite for your product-whether it's the film, the theater building, or the seats. Everything must have that sensibility in order to succeed.

Are the borders being blurred between international exhibition markets and those in North America?

Absolutely. I don't think the United States has a monopoly on all the good ideas. I've seen a wonderful execution on cinemas in other parts of the world. The U.S. didn't start luxury seating; that came from Australia. Reserved seating, big in Europe, is now finding its way to the U.S. Cinemas serving alcoholic beverages like beer and wine, that was happening in Europe years ago. I think it's all about finding the right ideas and best practices, and then going out and testing them. Customers have to adopt them, and not everything is transferable between markets.

You've been at the forefront of many revolutions within the industry: the introduction of the multiplex, the transition from analog to digital, and the evolution of digital 3D.

I think it's part of the industry's need to stay ahead of competing activities that a customer might have. I always used to say that you compete more for peoples' time than for anything else, so you need to completely reinvent yourself, and this industry is very good at that. Whether it was stadium seating, multiplexes, digital, 3D, the industry is constantly looking for the next big thing. I was always one to ask what's next, and if there was something coming out, I wanted to try it. Not everything works, but you want to try it in order to see if your customers will react to it. I remember before digital cinema, doing football-game broadcasts in Canada on a big television projector that would show a very fuzzy picture. We had a great time with that because we made it an event. I was in Europe when the first digital projectors came along, and they were expensive, but we had to see where this was going. Maybe sometimes we were a little early, meaning more cost, difficulty, and bugs. I remember getting the call that said that the 1.2K projector I just purchased wasn't going to be getting any more films, that I had to upgrade to the 2K. Sometimes being early also means being a little bit ahead of the curve.

You were certainly early for something like digital 3D. Tell us about your experience with RealD; what was it like to launch digital 3D at time when people really weren't sure of the format's long-term viability? Far from being a passing fad, you helped build a global leader in the business.

I was invited to look at the [RealD] presentation early on. I had the same skepticism that I think everyone else shared: is it going to be a fad? Is it going to come and go? And I asked those same questions. I always like to approach things from that perspective: how is this going to be different? Why is it going to work this time when it didn't in the previous two attempts? Digital technology allowed for a lot of the corrections to 3D that were never possible before. 3D in the past gave people headaches because it was so hard to sync. The glasses were also horrible. It was just a terrible experience. When I went to see RealD and what they were doing, it was different. The next thing was to socialize it with some of my studio and filmmaker connections to see what they thought. If this was going to work, it had to have support from the entire ecosystem-not just me pushing it on somebody. It had to be something filmmakers, studios, and exhibition would embrace. Creating that ecosystem was key to whether or not this was going to be successful. When filmmakers like James Cameron came aboard, he ended up being on the board of RealD. I remember early on sitting with Dick Cook [former chairman of Walt Disney Studios] and he wanted to transform Chicken Little into a 3D movie. I saw the light go on in who I considered to be geniuses in our industry; they believed in it, and that gave me even more confidence that it could happen. Then it was just about putting all the other pieces together. The exhibitor platform: we designed a business plan where it would take very little capital for the exhibitor to participate and where we would participate only once they made money.

Was there ever a "eureka" moment with digital 3D, where you just stepped back and realized it was going to work, or was it more of a gradual process?

I relied quite a bit on what I was hearing in the creative community. They looked at 3D as another creative tool, and it's been most successful when it's utilized that way. It has been least successful when it's forced on a movie that doesn't need to be in 3D. If you look at the great storytellers that use that tool effectively: James Cameron, Ang Lee, Martin Scorsese-these great filmmakers who know how to best use their cinematic tools-that's when it's effective. We saw it play out again with Gravity.

Have you had any mentors in your career?

I think you learn as much from people you don't want to emulate as you do from those you do. People that have very draconian ways of doing business, you learn just as much from them about how you don't want to act. Then there are those people you want to emulate, and there are a lot of them who influenced my career, both in distribution and exhibition. I don't mean to leave anybody out: Frank Mancuso, Ted Mann, Larry Gleason, Dick Cook, Sumner Redstone. There are so many who touched my life and influenced me positively.

I always say, what's next? When I was building theaters, I would challenge my team by asking them what they did to make people turn right into our complex instead of turning left into our competitors'. That's a question I continue to ask about the industry. How do you make people come back instead of having them watch movies on their mobile devices? I think the answer is technology. Technology is our friend and enemy; it's the same reason we lose people from coming to our theaters, but it can also cure that problem. I look at technology as how you can stay ahead of other experiences.

Where do you think we are now as an industry, and where do you see the business going in the next 10 or 15 years?

I think there will always be a place for cinema-going as a communal experience, but that experience will change by definition in the way we approach our guests. I don't think the conventional theater in the future will look like it does today. I think it's important to try to understand that technology can get us to a more immersive and entertaining spectacle than what we have today. I see interactivity playing a big role, immersiveness, a reconfiguration of cinemas. It will be evolutionary, not revolutionary; one technology will lead to the invention of others, and so on.