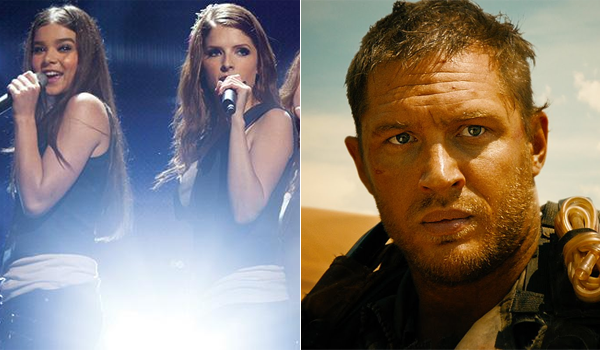 "Pitch Perfect 2," voted in a Fandango moviegoer poll as the summer's most anticipated comedy, is outpacing previous summer comedies like "The Heat" at the same point in the Fandango sales cycle.

According to a survey of more than 1,000 "Pitch Perfect 2" ticket-buyers on Fandango:
· 86% are fans of Anna Kendrick;

· 71% have seen the original "Pitch Perfect" more than once;

Fandango's "Mad Max" pre-sales are stronger than its pre-sales for previous R-rated action movies like "Lucy," "Kingsman: The Secret Service" and "300: Rise of an Empire."

According to a survey of more than 1,000 "Mad Max: Fury Road" ticket-buyers on Fandango:
· 92% are excited to see action effects that were created on set (and not by CGI);
· 85% had seen at least one of the previous "Mad Max" movies;
· 83% are anxious to see "Mad Max"'s Charlize Theron as a hard-hitting action star;
· 62% are looking forward to seeing the film's supporting cast of female action heroines.

"‘Pitch Perfect 2' and ‘Mad Max: Fury Road' are the hot tickets this weekend, and the weekend race looks close," says Fandango Chief Correspondent Dave Karger. "Both films appeal to very different but sizable audiences. 'Pitch 2' is perfect for date night and girls' night out, while the ‘Mad Max' franchise has been rebooted for a new generation of action fans with gritty performances by Charlize Theron and Tom Hardy."