Avengers: Age of Ultron dominated the Chinese box office in its first weekend of release, scoring 92% of the market for a hefty $84.81 million. That helps bring the Disney/Marvel blockbuster's 6-day total to $154.09 million which is already good enough for the final spot on China's top ten highest-grossing films of all time and the 5th highest-grossing imported film ever behind Furious 7 ($391M), Transformers: Age of Extinction ($319M), Avatar ($216M), and Transformers: Dark of the Moon ($173M). Ultron Hulk-smashed the first Avengers' total of $91.4 million from 2012 in just five days, easily becoming China's top grossing film in the Marvel Cinematic Universe. China's IMAX screens also took in a record-setting $17.5 million this weekend (previous best was Transformers: Age of Extinction's $9.75 million).

The rest of the top ten only accounted for 8% of the weekend box office. In a distant second was last weekend's champ, Chappie which eked out $1.43 million on 5% of China's screens. Its 10-day cume is up to $13.72 million. Close behind in third place was romantic newcomer The Beloved with $1.39 million. DreamWorks Animation's Home brought in $1.07 million for a 24-day total of $26.73 million to take fourth place, and rounding out the top 5 was Silent Separation, just breaking the million dollar mark for a $55.29 million 18-day cume. 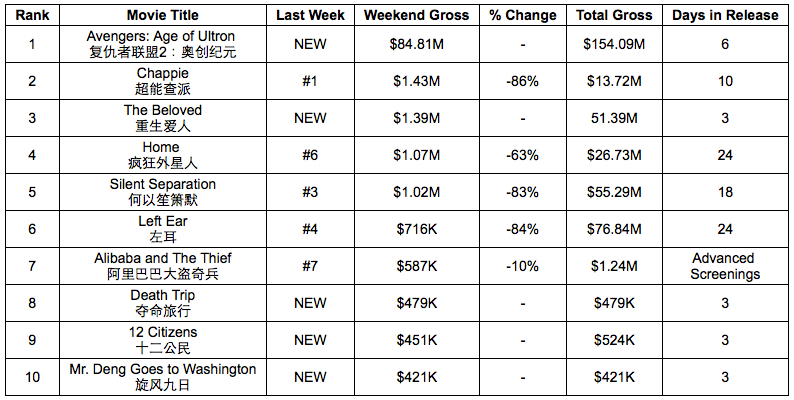