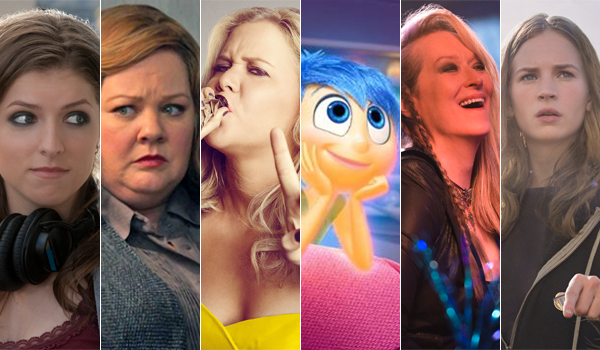 On the heels of Pitch Perfect 2's stellar $69 million opening at the domestic box office this weekend (trailing only Austin Powers in Goldmember among all-time PG-13 comedies), Hollywood is eagerly listening to moviegoer demand for more content appealing to women (see this year's earlier success of Cinderella and Fifty Shades of Grey).

Indeed, this summer packs a hearty lineup of flicks that make the season more than just a popcorn fest for dudes and teens. From action and comedy to animation and drama, here's a brief rundown of what to expect from a few high profile, female-centric flicks opening in the next three months.

This original film from director Brad Bird (The Incredibles, Mission: Impossible - Ghost Protocol, The Iron Giant) will ideally cater to men and women of all ages if Disney gets its wish. Budding star Britt Robertson takes the leading role alongside George Clooney in an imaginative adventure that hopes to expand the appeal of sci-fi themed flicks to include the Mouse House's considerable female audience -- one which has started growing again recently. Judging by somewhat mixed reviews so far, Tomorrowland unfortunately may not turn out to be one of the summer's critical darlings, but it has potential to be a slow-burn performer that gets the industry thinking about more original sci-fi tentpoles led by young women going forward.

Melissa McCarthy's latest reunites her with Bridesmaids and The Heat helmer Paul Feig. The former's popularity needs little review at this point, and the latter has shown an uncanny ability as a writer/director to tap into the funny bone of both men and women using mostly female-led casts -- a talent that doesn't come around very often. On top of Feig's added exposure as the announced helmer for next year's Ghostbusters reboot, Spy itself was the recipient of excellent word of mouth following an industry screening at CinemaCon in April. This should no doubt prove to be yet another $100 million+ earner for the McCarthy/Feig team, and could soar much higher than that.

Inside Out
Disney
June 19

Pixar's first film in two years, and their first non-sequel in three, is already hotly anticipated by fans as it comes from Up and Monsters, Inc. director Pete Docter. The animation powerhouse found success with the mother-daughter story at the heart of 2012's Brave, and a similar generational appeal could be in play here. With Inside Out, the widely adored Amy Poehler voices Joy (the film's technical main character) -- as she leads a young girl's emotions through a challenging family move away from the home she grew up in. Look for the cerebral animated comedy to be one of the summer's biggest hits following notable praise from early screenings thus far. Conservatively, $200 million sounds more than attainable, with a shot at much more if it connects on the level of Up or Finding Nemo.

This may not be female-led in terms of casting, but women are undoubtedly the sought-after audience. Channing and most of the gang (sans McConaughey... sorry, folks) return in the sequel to 2012's surprise hit loosely based on Tatum's real-life exploits as a male stripper before his movie career took off. Early trailers have played up the unapologetic, oft-preposterous comedy defining the tone of these movies, which should bring back a lot of the first movie's fans. That pic took in $113 million domestically, a figure which the sequel could get fairly close to if word of mouth is decent enough.

Universal will confidently open against Marvel's Ant-Man in mid-July with what so far looks like a "comeback" for director Judd Apatow. In the lead, and serving as the screenwriter, is exploding comedian Amy Schumer -- whose Comedy Central series Inside Amy Schumer has become one of the network's most successful shows in a relatively short period of time. Schumer's been putting her time in on the press circuit leading up to Trainwreck's debut later this summer, and the trailers offer a lot for both female and male fans of R-rated comedy to look forward to. We fully expect this to be another date-night-friendly style hit for director Apatow in the vein of Knocked Up or The 40-Year-Old Virgin when it comes to box office receipts, not to mention a fantastic start to what looks like a promising movie career for Schumer.

The next adaptation from author John Green, responsible for the phenomenal book/film success of The Fault In Our Stars, has been a social media staple for months (boasting an impressive 767,000 Facebook fans already). Green joins Fault's two main screenwriters in bringing Paper Towns to life, which features Cara Delevingne and Nat Wolff, both of whom are hot subjects among teenage and young adult audiences. This latest teenage coming-of-age story is right at home with a late July release, and considering 82 percent of Fault's opening weekend audience were women, Paper Towns is a movie already on their radar. Watch out for this one.

Who doesn't love Meryl? The venerable queen is back with a summer dramedy that finds her as a rock-star mom coming home to reconnect with her family (particularly, her grown daughter -- played by real-life daughter Mamie Gummer). Streep has found plenty of success in past summers with the likes of Mamma Mia!, Julie & Julia, and Hope Springs, so Ricki's August release in a move to court adult audiences is definitely up her alley. Penning the script is Diablo Cody (Juno, Young Adult). The film's first trailer was just recently released, so we'll expand more on box office potential in the weeks and months ahead.

Of course, these may not prove to be the only movies women gravitate toward this year. The industry is waiting to see how the legs of Mad Max: Fury Road pan out with its stunningly positive word of mouth driven by the film's unexpectedly bold approach to action movie gender representation. And with major tentpoles like The Hunger Games: Mockingjay - Part 2 and Star Wars: The Force Awakens boasting strong female characters in leading roles later this year, the trend rightfully doesn't look to be ending anytime soon.