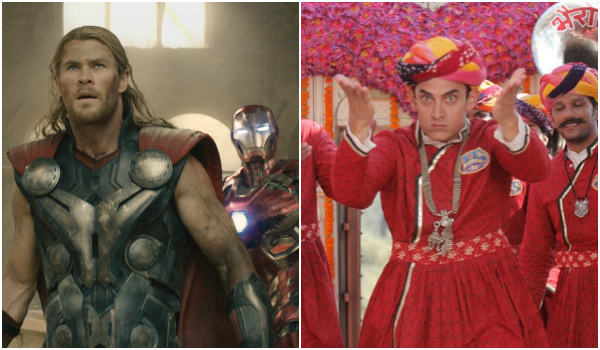 With three years of breakneck growth from the Chinese box office since the original Avengers grossed $91.36M in 2012, and a solid Marvel fan base thanks to Disney China's strong marketing, expectations for Ultron to smash box office records were sky high especially after Furious 7's record breaking run in April. Yet despite more than doubling the original's total haul, Ultron appears to be running out of gas after a steep 68% drop this weekend and will have to settle for third on the all-time list.

Word of mouth seems to have affected Ultron's legs, as rankings on Douban, Weibo, and Mtime are all a point or more below Furious 7 which dominated the box office for much of its month-long run.  Tomorrowland and I, Frankenstein, both opening on Tuesday, and Stand By Me Doraemon, opening on Thursday, will all steal screens from Ultron and further weaken its staying power next weekend.

PK, Bollywood's highest grossing film of all-time worldwide, took second place with an impressive $5.13 million. On only its second day of release, PK surpassed Dhoom 3 as the top grossing Indian film ever to open in China, and strong word of mouth continued through the weekend, pushing the film's screening rate from 13% to 16% which further eroded Ultron's supremacy. Prime Minister Narendra Modi and Chinese President Xi Jinping met last week in China to discuss deepening cultural ties between their two nations so Chinese audiences can expect to see more Bollywood films in the future.

Date night flick Love Without Distance (土豪520) took advantage of its May 20th release date (a homophone for "I love you" in Mandarin) and embraced $2.66M for a four-day total of $3.55M. Chappie held decently in its third weekend, dropping 18% to claim $1.17M for a total of $16.38M. Rounding out the top 5, animated newcomer Alibaba and The Thief (阿里巴巴大盗奇兵) opened with $1.05M for a $2.3M cume after 2 weeks of advanced screenings. 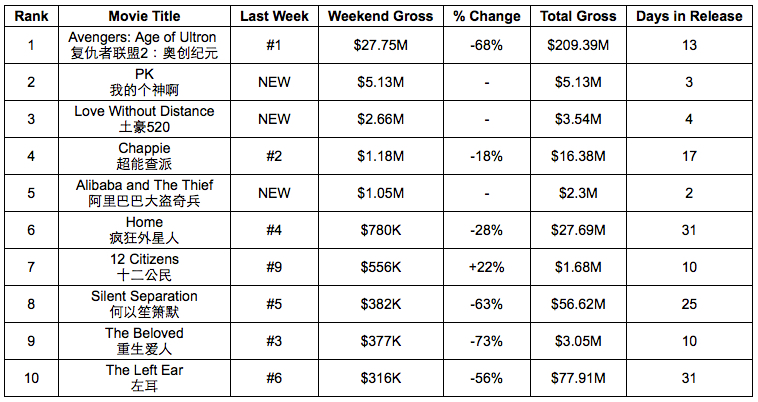