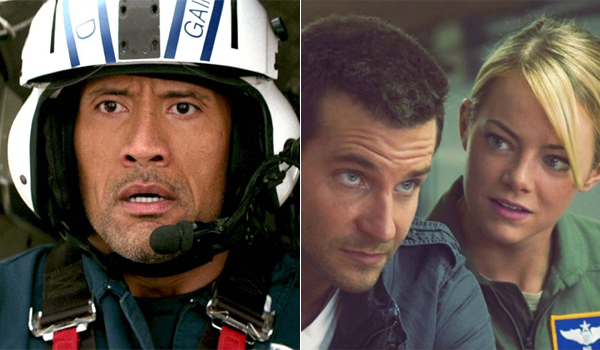 Sunday Update: Warner's San Andreas demolished expectations in a big way this weekend with an estimated first place start of $53.22 million. The Dwayne Johnson led disaster film proved to be critic proof this weekend and no doubt received an added boost from Johnson's growing fanbase after the recent break-out success of Furious 7. The opening weekend performance of San Andreas was especially impressive when considering the relatively low levels of online buzz the film displayed in the weeks leading up to its release. In addition to outpacing expectations in a big way, San Andreas opened 79 percent stronger than the $29.80 million start of last year's Hercules and just 20 percent below the $66.41 million opening of 2013's World War Z.

San Andreas opened with $18.23 million on Friday (which included an estimated $3.1 million from Thursday evening shows), increased a surprisingly strong 13 percent on Saturday to take in $20.58 million and is estimated to decline 30 percent on Sunday to gross $14.41 million. That places the film's estimated opening weekend to Friday ratio at 2.92 to 1. That is a very encouraging early sign going forward, as is the film's A- rating on CinemaScore (which suggests that the film is going over much better with moviegoers than with critics). However, competition will be especially fierce throughout the month of June, especially from Universal's Jurassic World.

The audience breakdown for San Andreas was nearly evenly split between genders (51 percent female, 49 percent male) and skewed heavily towards moviegoers over the age of 25 (70 percent). 3D grosses represented 44 percent of this weekend's overall gross.

Pitch Perfect 2 placed in a distant second this weekend with an estimated $14.8 million. Universal's successful musical comedy sequel starring Anna Kendrick was down a sharp 52 percent from last weekend's three-day frame. While Pitch Perfect 2 continues to be quite front-loaded, the film is still outpacing expectations in a big way with a 17-day take of $147.54 million. That places the film 30 percent ahead of the $113.70 million 17-day take of last year's Neighbors. Pitch Perfect 2 could experience another sizable decline next weekend with both Fox's Spy and Focus's Insidious: Chapter 3 entering the marketplace.

On the heels of last weekend's already lackluster start, Disney's Tomorrowland was down two spots and a troubling 58 percent this weekend to place in third with an estimated $13.8 million. Mixed word of mouth and the break-out performance of San Andreas both clearly took a toll on Tomorrowland this weekend. The pricy Brad Bird directed sci-fi film starring George Clooney has grossed $63.19 million in ten days of release. Tomorrowland is currently running 14 percent behind the $73.10 million ten-day start of 2011's Super 8 and will need to stabilize very soon if it is to eventually reach the $100 million domestic mark.

Warner's Mad Max: Fury Road followed closely behind in fourth with an estimated $13.63 million. The critically acclaimed action film starring Tom Hardy and Charlize Theron was down 45 percent, which represented a respectable decline given the added presence of San Andreas this weekend. Mad Max: Fury Road continues to perform on the high end of expectations with a 17-day take of $115.91 million. That places the film 7 percent ahead of the $108.45 million 17-day gross of 2012's Prometheus.

Avengers: Age of Ultron rounded out the weekend's top five with an estimated $10.92 million. The blockbuster superhero sequel from Disney and Marvel fell 50 percent from last weekend. Avengers: Age of Ultron has grossed $427.07 million through 31 days of release. The film surpassed the $424.67 million final gross of 2013's The Hunger Games: Catching Fire this weekend to move into tenth place on the all-time unadjusted domestic chart.

Meanwhile, Sony's Aloha was off to a soft start this weekend with an estimated sixth place take of $10.0 million. The Cameron Crowe directed film starring Bradley Cooper, Emma Stone and Rachel McAdams opened below its already scaled back expectations. Unlike San Andreas, which was able to use Johnson's recent success with Furious 7 to its advantage, Aloha was unable to see any type of boost from Cooper's recent success with American Sniper. The one saving grace for Aloha is that the film carried a modest reported production budget of $37 million. Aloha opened 11 percent below the $11.24 million three-day start of 2009's All About Steve.

Aloha started out with $3.50 million on Friday (which included an estimated $0.50 million from Thursday evening shows), increased 6 percent on Saturday to take in $3.73 million and is estimated to decline 25.5 percent on Sunday to gross $2.78 million. That places the film's estimated opening weekend to Friday ratio at 2.86 to 1. While many of Crowe's previous efforts have been able to display tremendous holding power, Aloha will have an uphill battle ahead of it given a soft B- rating on CinemaScore, poor critical reviews and the amount of competition it will face throughout June. The audience breakdown for the film skewed towards female moviegoers (64 percent) and towards moviegoers over the age of 30 (57 percent).

Fox's Poltergeist placed in seventh this weekend with an estimated $7.8 million. The PG-13 horror remake was down a very sharp 66 percent from last weekend. Poltergeist has grossed $38.27 million in ten days. That is towards the lower end of pre-release expectations and places the film 8 percent behind the $41.53 million ten-day take of 2013's Evil Dead.

Saturday Update: Warner Bros. reports San Andreas bowed to an impressive $18.215 million on Friday, including Thursday's pre-shows. That figure easily makes it Dwayne Johnson's career best opening day for a film in which he's the primary lead actor (topping The Scorpion King's $12.55 million), while also blowing past the $11.06 million first day of his Hercules last summer. For added perspective in the disaster genre, San Andreas earned more in its first day than Into the Storm pulled ($17.35 million) over its three-day weekend last August. Johnson's star power is certainly to thank here following his popular presence in the Fast & Furious franchise, as well as G.I. Joe: Retaliation and Journey 2: The Mysterious Island -- all franchises for which he's credited for helping revive at some point. Word of mouth for San Andreas doesn't look strong with a 63 percent audience score and 49 percent critics' score, but either way, the film is poised to become a financial success with this kind of debut. In its favor, the studio reports the pic earned an "A-" CinemaScore. BoxOffice is projecting a $49 million opening weekend.

In second place Friday, Pitch Perfect 2 was off 52.5 percent from last Friday to add $4.6 million to its haul. The comedy sequel continues to play well as we head into June, having now reached $137.3 million domestically. Universal is projecting a $14.2 million weekend.

Mad Max: Fury Road posted another $3.865 million yesterday, down just 42 percent from last Friday. George Miller's post-apocalyptic franchise revival has amassed $106.16 million in North America thus far, and should bring in around $12.7 million for its third frame as it continues to benefit from enthusiastic audience and critical reception.

Cameron Crowe's Aloha opened unceremoniously on Friday despite its star-studded cast. The rom-com pulled $3.6 million in fifth place yesterday. Sony notes the pic received a "B+" CinemaScore from adults 25-54, but critics have mostly panned the film (18 percent) while early audience reception is heading in a sour direction (44 percent). Although the film's production budget was a modest $37 million, its projected $10.5 million opening this weekend unfortunately won't be enough to save it in the long run.

Meanwhile, Avengers: Age of Ultron added $2.86 million yesterday for a 46.5 percent week-to-week drop. The Marvel blockbuster sequel has totaled $419 million domestically now, and could finish ahead of Aloha for the weekend with a projected $10.7 million.

Friday Update #2: Sources tell BoxOffice that San Andreas is headed for an opening slightly above $40 million during its debut frame. Aloha should end up with around $14 million.

Friday Update #1: Warner Bros. reports that San Andreas got off to a strong start on Thursday night with an estimated $3.1 million. That figure handily tops fellow Dwayne Johnson starrer Hercules, which pulled $2.1 million from Thursday shows in mid-July last year. San Andreas also wasn't too far behind the $3.7 million Thursday bow of Mad Max: Fury Road. It's pretty clear that Johnson's star power is the driving force behind the disaster pic's potential this weekend.

Meanwhile, Aloha also debuts in theaters today, although no Thursday figures were available at the time of publishing.