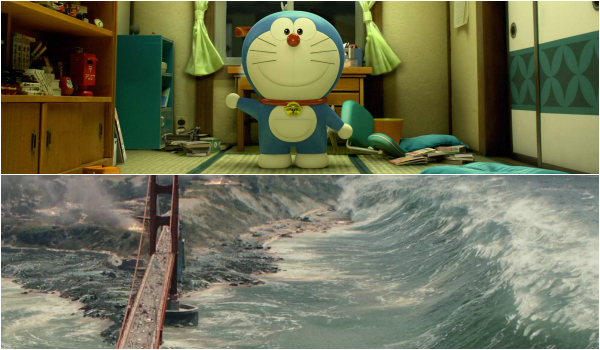 by Jonathan Papish and EntGroup Consulting

China's current obsession with a time-traveling Japanese robotic cat is too strong that even its infatuation with Dwayne "The Rock" Johnson plus large scale cinematic destruction won't win out this weekend. Disaster flicks seem tailor made for Chinese audiences who embraced last year's Godzilla with $78.02 million and 2012 with $68.25 million all the way back in '09 before the box office took off. However, Doraemon Stand By Me looks to repeat as the Chinese box office champion for a second straight weekend as it appears the tsunami San Andreas triggered last weekend at the global box office has weakened upon impact with the Chinese mainland.

Despite garnering the highest intent to purchase, awareness, and word of mouth of the five new releases this week according to EntGroup, San Andreas had presales for its Tuesday opening day only on par with last week's Tomorrowland debut based on data from from Chinese online ticketing site Gewara. That could spell trouble for Johnson and his film in China since Tomorrowland grossed a measly $15.5 million in its first week of release. While forecasts by Chinese box office pundits are predicting a weak $40-50 million by the end of San Andreas' run, we are a little more optimistic considering the film's estimated opening day tally came in around $5 million as well as China's insatiable appetite for disaster films - we predict $65 million. EntGroup reported San Andreas playing on about 33% of China's ~27,000 screens and Doraemon on 25% this Tuesday, but things could shift in "Blue Fatty's" favor over the weekend when families flock to the animated pic that's receiving great word of mouth. Chris Pratt and Jurassic World stomp into China next Wednesday which will further weaken San Andreas' aftershocks.