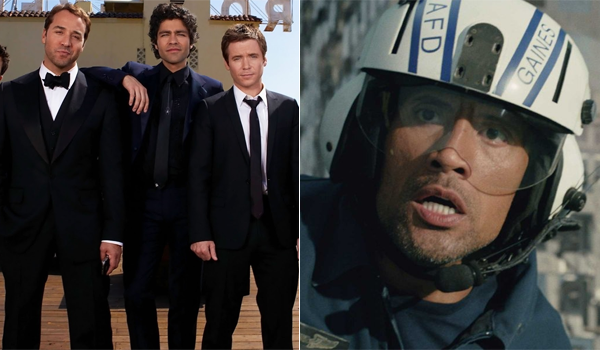 Warner's San Andreas was up one spot from Wednesday to return to first place at the daily box office on Thursday with $3.54 million. The Dwayne Johnson led disaster film was down a noteworthy 10 percent from Wednesday, as the Thursday evening releases of Focus' Insidious: Chapter 3 and Fox's Spy, as well as Game 1 of the NBA Finals all took a toll in general on films aimed at adults on Thursday. San Andreas was easily the week's top film with a stronger than expected seven-day start of $72.63 million. That places the film 16 percent ahead of the $62.56 million seven-day take of 2013's G.I. Joe: Retaliation and 23 percent behind the $93.92 million seven-day gross of 2013's World War Z.

Fellow Warner Bros. release Entourage placed in second on Thursday with $2.01 million. The theatrical adaptation of the HBO comedy series was down one spot and a very sharp 63 percent from Wednesday's opening day performance. Between the relative rush-out of fans on Tuesday evening and the large daily percentage drop-off on Thursday from Wednesday, Entourage is showcasing clear signs of significant front-loading thus far. As a result, whether or not the film can rebound today will be extremely important for it going forward. The two-day total for Entourage stands at $7.38 million, which is softer than had been expected due in part to the film's strong online pre-sales.

Warner's Mad Max: Fury Road followed very closely behind in fourth with $1.275 million. The critically acclaimed action film starring Tom Hardy and Charlize Theron was down a significant 12 percent from Wednesday and down 42 percent from last Thursday. Mad Max: Fury Road took third place this week with $20.54 million. That represented a 47 percent decline from the previous week and places the film's three-week total at $122.83 million.

Disney's Tomorrowland rounded out the day's top five with $1.257 million. The pricy Brad Bird directed sci-fi film starring George Clooney was down a slim 1 percent from Wednesday and down a healthy 31 percent from last Thursday. Tomorrowland claimed fourth place this week with $19.83 million. That represented a sharp 60 percent decline from the film's opening week performance. The two-week total for Tomorrowland stands at a softer than expected $69.21 million.

Fellow Disney release Avengers: Age of Ultron took sixth place with $0.945 million. Marvel's blockbuster superhero sequel declined 3 percent from Wednesday and 33 percent from last Thursday. Avengers: Age of Ultron placed in fifth for the week with $15.66 million and has grossed $431.81 million through five weeks of release. The film is currently in tenth place on the all-time unadjusted domestic chart and over the weekend will surpass the $435.11 million lifetime gross of 1982's E.T. to move into ninth place.

Sony's Aloha rounded out its disappointing first week of release with a seventh place take of $0.633 million. The Cameron Crowe directed film starring Bradley Cooper, Emma Stone and Rachel McAdams was down a troubling 15 percent from Wednesday. Aloha placed in sixth for the week with a modest seven-day start of $13.04 million.