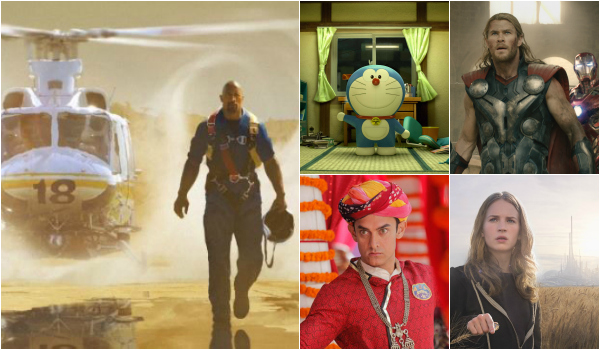 The top five films this weekend in China all came from outside the country. While that's not a first for a country still building its domestic film industry, two of the films were non-American releases perhaps foreshadowing an end to Hollywood's dominance in China and signaling greater international diversity on Chinese screens.

Chinese moviegoers embraced Dwayne Johnson and his latest disaster flick with $34 million this weekend from about 35% of screens, raising the 6-day total for San Andreas to a solid $51 million. Decent word of mouth has carried the Warner Bros. action film since its opening Tuesday, as it held rock steady with ~$5.5 million on Tuesday, Wednesday, and Thursday before jumping to $8 million on Friday (+45%), $13.8 million on Saturday (+73%), and then dipping slightly for $12.2 million on Sunday (-11%). To get a sense of how well San Andreas is holding, compare that to the daily changes during Avengers: Age of Ultron's opening week in May. Despite putting up higher daily totals, Ultron fell hard after its opening Tuesday (Weds. -42%, Thurs. -26%), before rebounding for the weekend (Fri. +40%, Sat. +85%, Sun. -30%). San Andreas' legs will ultimately depend on if it's able to co-exist with Jurassic World which opens on Wednesday. Chinese exhibitors certainly see dollar signs in those dinos, but the demand for Johnson and his disaster flick this week could help San Andreas retain more screens than previously thought.

In second place, Doraemon Stand By Me continued its surprising run this weekend with $13.5 million from about 25% of screens for a total of $73 million after 11 days of release. Doraemon's China haul has now surpassed its entire Japanese run ($66.7 million) and the 3D animation currently sits as the third highest grossing animated film of all-time in China behind Big Hero 6 ($84.63 million) and Kung Fu Panda 2 ($94.75 million).

Avengers: Age of Ultron is nearing the end of its Middle Kingdom run, but eked out $3 million from ~8% of screens for $234 million after 27 days of release. Ultron is the third highest grossing film of all-time in China behind Transformers 4 and Furious 7.

In fourth place, Bollywood hit PK held well again this weekend, dropping 40% for $2.2 million and $16.4 million after 17 days of release. The film's distributor Huaxia announced this week that Chinese audiences in 1st and 2nd tier cities will soon be able to watch the film in its original language. It had previously only been showing a dubbed version with Chinese star Wang Baoqiang (王宝强) voicing Aamir Khan's character.

Rounding out the top five, Disney's global bomb Tomorrowland plummeted 83% from last weekend for $1.4 million and a 13-day total of $18 million. 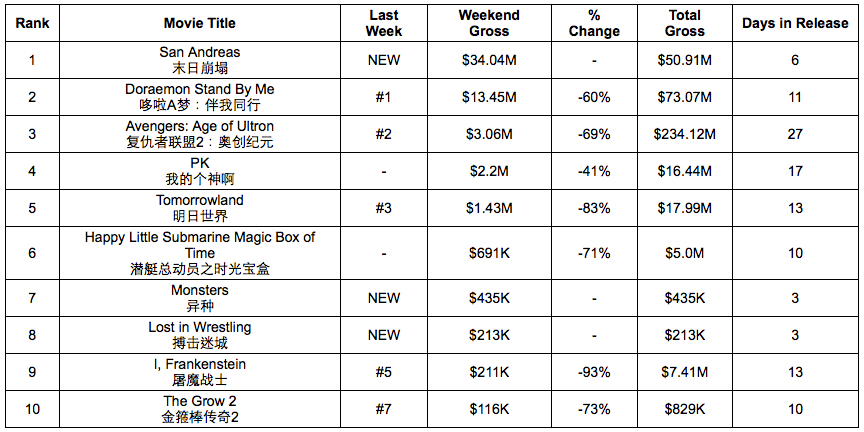