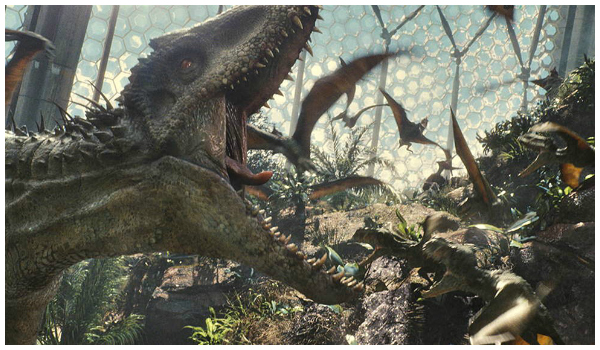 Even though San Andreas is doing extremely well in China-the disaster flick has earned an impressive $56 million in its first week-its run in first place will come to an abrupt end thanks to the emergence of Jurassic World which opens Wednesday, two days ahead of the North American release.

Universal's reboot and fourth installment in the wildly popular dinosaur franchise is set to become a massive global hit. The science fiction film's performance in China will contribute a large chunk to a sum that could end up past $800 million worldwide if everything connects in other key markets. We're currently predicting that Jurassic World will cross $300 million in North America alone. In China, demand for Jurassic World is clearly very high. The 3D-release of the original Jurassic Park film earned an impressive $56.5 million back in 2013. Star Chris Pratt is very popular in China thanks to the success of Guardians of the Galaxy, and his visit to Beijing recently along with Bryce Dallas Howard and director Colin Trevorrow generated decent buzz for the flick. According to EntGroup's EFMT Marketing Index, Jurassic World boasts the highest awareness, intent to purchase and word of mouth of any new release.

While San Andreas and Jurassic World could end up competing for similar demographics, we're betting there's enough room in the market for both, especially with Chinese schools just letting out for the summer. San Andreas will likely score $100 million+ by the end of its run and it shouldn't be a problem for Jurassic World to do the same. How much more than $100 million will depend on word of mouth. Early estimates show about $1.2 million for Wednesday midnight shows so the film is off and running.

Only two new films will try to compete with San Andreas and Jurassic World: Zai Jian Wo Men De Shi Nian (再见我们的十年), a small-budget effort staring Mike Sui, and Who Am I? (我是谁2015) a film aimed at the young male crowd. Expectations are low for both titles.