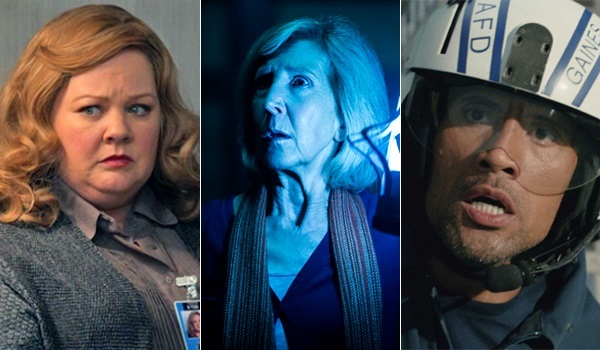 Spy took in $2.34 million on Thursday to lead the daily box office for a sixth consecutive and final day. The Melissa McCarthy led comedy from Fox was down 15 percent from Wednesday. Daily percentage declines were sharp in general for wide releases on Thursday, due in part to the strong Thursday evening launch of Universal's Jurassic World (which will be counted towards Friday's opening day performance) and in part to Game 4 of the NBA Finals. Spy was the week's top film with a respectable, but softer than expected seven-day start of $40.94 million. The film is currently running 13.5 percent behind the $47.29 million seven-day take of 2013's Identity Thief.

Warner's San Andreas held steady in second place with $1.76 million. The Dwayne Johnson led 3D disaster film was down a very sharp 25 percent from Wednesday and down 50 percent from last Thursday, as it clearly took an especially large hit from the arrival of Jurassic World. San Andreas placed in second for the week with $35.68 million. That represented a 51 percent decline from the film's opening week performance and places the film's two-week total at a significantly stronger than expected $108.31 million.

Focus' Insidious: Chapter 3 rounded out its first week of release with a third place take of $1.33 million. The third chapter of the low-budget horror franchise from Gramercy and Blumhouse Productions was down a sizable 20 percent from Wednesday's performance. Insidious: Chapter 3 placed in third for the week with a seven-day start of $30.07 million. That was on the low end of pre-release expectations and was just below the recent $30.47 million seven-day launch of Fox's Poltergeist.

Pitch Perfect 2 was up one spot from Wednesday to move into fourth place with $0.869 million. Universal's successful musical comedy sequel starring Anna Kendrick declined just 7 percent from Wednesday, which represented the day's strongest daily percentage hold among wide releases. Pitch Perfect 2 placed in sixth for the week with $11.43 million. The film was down 44 percent from the previous week and has grossed a significantly stronger than expected $164.72 million in four weeks.

Meanwhile, Warner's Entourage was down one spot and a massive 28 percent from Wednesday to land in seventh place with $0.675 million. The theatrical version of the HBO comedy series continues to be especially front-loaded thus far. Entourage placed in fourth for the week with $14.15 million and has grossed $21.53 million through nine days of release. The film is currently running 32 percent behind the $31.85 million nine-day take of 2012's The Dictator.