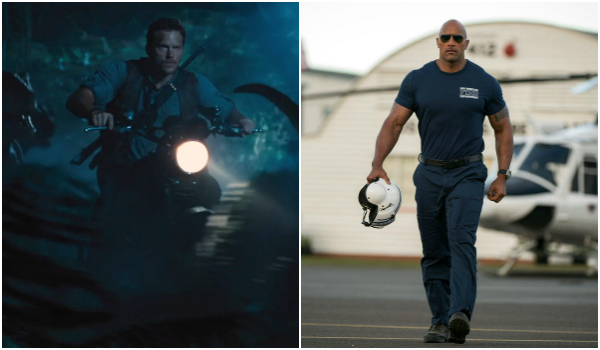 A large chunk of Jurassic World's record-breaking global debut of $524.4 million came from China where moviegoers contributed $66.6 million over the weekend and $97 million since the film premiered on Wednesday. Devouring 78% of the total box office this weekend, Universal's dino reboot played on nearly half of China's ~25,000 screens with 208,700 showtimes. Saturday ($27.18 million) and Sunday ($23.27 million) were the 11th and 14th highest single-day grosses in China's box office history respectively.

In second place, holdover San Andreas felt some light aftershocks, falling 63% to $12.68 million and a 13-day total of $80.13. Demand for the Dwayne Johnson disaster flick remained high after a higher than expected opening weekend and strong word of mouth, but it ended up losing almost half of its screen time once JW opened (Monday - 48,321 showings; Tuesday - 26,642 showings). San Andreas will have difficulty hitting $100 million with the added pressure from several domestic pics opening this week.

Japanese animation Stand By Doraemon took home third place with $4.38 million, lifting its 18-day cume to $81.43 million. "Blue Fatty" as he's lovingly known to his Chinese fans is closing in on Big Hero 6's $84.6 million for the #2 highest-grossing animated film in China's history.

Aamir Khan thanked Chinese fans this week for embracing his film PK. The highest-grossing Indian film of all-time has made $94 million worldwide with nearly a fifth ($18.4 million) coming from the Mainland. Khan said the film's success "reflects the historical love of Chinese audiences for Indian cinema as well as the emotional and cultural bonds they share with this country [India]."

Rounding out the top five was local newcomer Who Am I (我是谁2015) which grossed $539K for the weekend. It's the first Chinese film to enter the top five in three weeks. 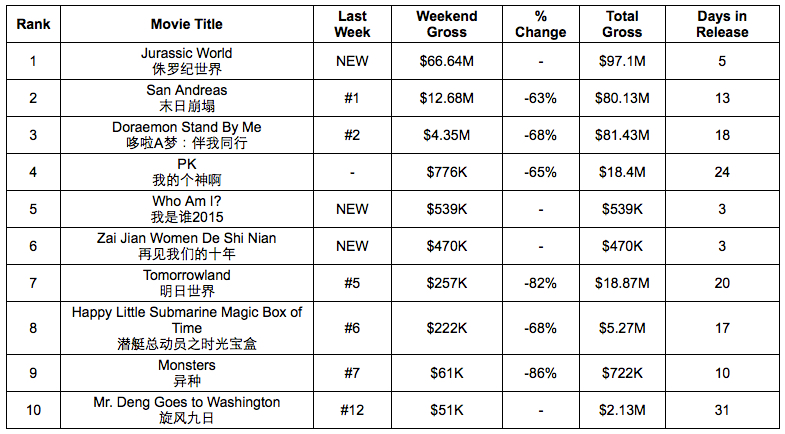