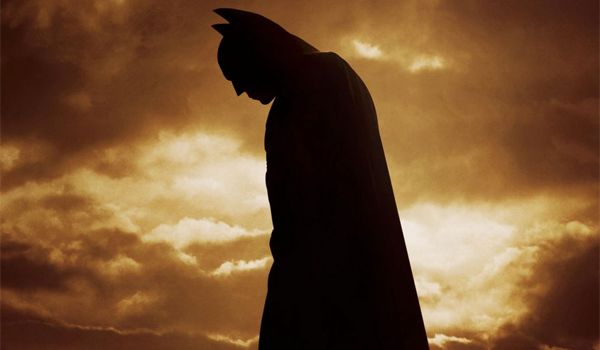 This is a piece I intended to publish on Batman Begins' proper anniversary (June 15), but Jurassic World's phenomenal and ongoing success made a throwback story seem ill-timed on Monday.

With that out of the way...

It's hard to believe ten years have passed since Batman was given what many fans consider the origin movie the venerable character deserved for so long. Sure, Tim Burton's 1989 Batman was a massive blockbuster and still has its admirers today, but it's possible to recognize Begins' legacy without doing a disservice to that flick.

I can vaguely remember the hype around 1992's Batman Returns, seeing it in theaters, and watching Batman Forever on VHS seemingly every week one summer. Let's also not forget Batman: The Animated Series -- arguably the truest in noirish spirit of any on-screen Caped Crusader at the time. But for me, walking out of Batman Begins was like a revelation. I finally fell in love with a character and a story that, before then, I merely appreciated.

"THAT was a Batman movie!" a friend declared while our group stood in the theater parking lot, analyzing the movie and still salivating over the final scene with the Joker's calling card, Jim Gordon's parting conversation with Bruce/Batman, and all the potential the next movie had from the second the credits rolled on this one.

That was the moment I officially thought it fair to consider myself a Batman fan... not to mention one of Christopher Nolan, whose Memento was already convincing enough on that end.

That was also the moment Hollywood had its own revelation. Begins was the first big-budget reboot to show how lucrative starting fresh with a popular franchise could be. Never mind the fact that Begins had a dismal marketing campaign, failing to connect with casual viewers jaded by the franchise's downward spiral in the late 90s. The reboot itself drew some fan ire over TV ads that followed the Spider-Man playbook and employed Nickelback music instead of Hans Zimmer and James Newton Howard's memorable score. Judging by YouTube comments, some have fonder memories of that strategy than others... decide for yourself:

In short, marketing missteps plagued Begins leading up to release and received the finger-pointing when the film debuted to what most considered an underwhelming $15 million opening Wednesday at the box office. Still, the movie itself played extraordinarily well with critics and audiences, going on to become one of that summer's top box office earners with over $205 million, and a strong performer in DVD sales and cable ratings.

Beyond 2005, Nolan's Batman do-over set the pace for an industry that was entering a transition phase. Piracy's effects on moviegoing habits were becoming alarmingly real for the first time, theater owners and studios were embroiled in a financial debate over who should cover the costs of conversion from film to digital, and 2005 itself set an eight-year low in theater attendance. The business was at a crossroads while both creatives and executives looked for new directions in which to take cinematic storytelling.

With Begins, they found at least one answer.

The term "reboot" in relation to movies wasn't the buzz word ten years ago that it is today, and that's largely because of Batman's born-again success. 2006's Casino Royale revived the James Bond franchise by visiting that character's previously unexplored roots, J.J. Abrams' 2009 Star Trek followed suit in a big way, X-Men: First Class gave new life to a spiraling series in 2011, and so on.

Not every reboot since has worked on financial and creative levels, but those three and others like Man of Steel and Mad Max: Fury Road (though not an origin story) have found resurrection at the box office by way of reintroduction to a new generation of moviegoers. Rather than view that as a negative trend that needs to cease, it seems healthier to elevate the success stories and encourage more like them when they have something unique to offer.

As for Batman Begins, it also proved the value of giving a talented writer/director like Nolan the creative license to visualize his first big-budget movie and see it through. Numerous filmmakers have followed that template since, and Nolan himself obviously continued building on the foundation that Begins serves as in the blockbuster column of his résumé. Without that initial Batman revival, we may never have seen Heath Ledger's iconic turn as The Joker in The Dark Knight, or the high concept originality of Inception, or the bold climax of Bruce Wayne's journey in The Dark Knight Rises, or the standard-defying visual effects of Interstellar.