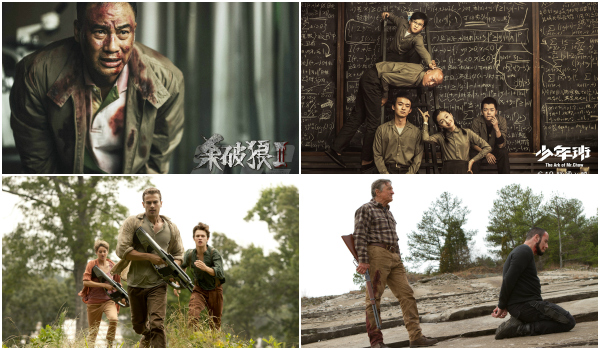 With high school seniors finally able to burn their exam prep books and university students out for the summer, seven new pics try to contend with Jurassic World in a competitive market over the Dragon Boat Festival holiday.

The last Chinese movie to sit atop the weekend box office was Jacky Wu's (吴京) Wolf Warriors way back in early April. Since Furious 7 premiered on April 12, a quintet of Hollywood movies and a Japanese robotic cat have ruled China's box office: Furious took the crown for four straight weekends followed by Chappie in a brief coup. Then Avengers: Age of Ultron dominated for 2 weeks before Stand By Me Doraemon, San Andreas, and most recently Jurassic World reigned in successive weekends. Could SPLII: A Time For Consequences (杀破狼2), a coproduction between China and Hong Kong and also starring Jacky Wu, end the cold streak? We're betting it will in a tight match up with Jurassic World.

Early counts for Thursday are showing SPLII opening on about half of China's ~25,000 screens while Jurassic World's screen share will drop to 29% and 16% by the weekend. EntGroup's EFMT Index also shows the action flick with the highest levels of awareness and intent to purchase of this weekend's new releases. In addition, Chinese action star Jacky Wu drove moviegoers to the cinema with Wolf Warriors to the tune of $87.58 million in March/April and we're thinking he'll do the same here if not better.

Hollywood holdovers Jurassic World and San Andreas will battle two new entries on Friday from Killing Season, starring Robert De Niro and John Travolta, and The Divergent Series: Insurgent. Both hold little water with Chinese filmgoers. Reports say censors cut a full 15 minutes from Killing Season's US version due to excessive violence, and the first installment of Divergent grossed a weak $12.3 million on the Mainland last year. The EFMT Index has Insurgent with this weekend's best word of mouth, but that's sure to drop once it hits screens.

With somewhat brighter prospects, local satire The Ark of Mr. Chow (少年班) could find a sizable youthful demographic that empathizes with the film's group of intelligent protagonists beaten down by China's oppressive education system. The film is also receiving a day-and-date release in the US through China Lion Film.

Trailers for SPLII, The Ark of Mr. Chow, and Love Me Love My Dog can be found below: