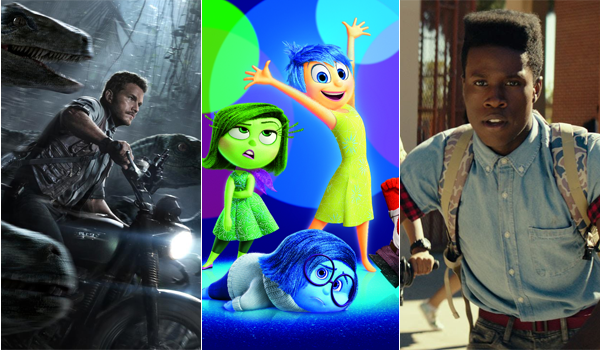 Jurassic World continued to roar at the box office this weekend with an estimated first place take of $102.02 million. The Chris Pratt led 3D blockbuster sequel from Universal and Legendary was down 51 percent from last weekend's record-breaking opening weekend performance. That represented an exceptional second weekend hold for a film of this size; especially given the significantly stronger than expected start of Inside Out this weekend. Jurassic World claimed the second largest second weekend gross of all-time; behind only the $103.05 million take of 2012's Marvel's The Avengers and is obviously close enough that it could still set a new record when actuals are reported on Monday. In the bigger picture, the second weekend hold for Jurassic World was the more impressive hold of the two given that it was coming off of much stronger first-week midweek business than The Avengers did thanks in part to opening in June as opposed to May.

Jurassic World has grossed $398.23 million in just ten days of release, which represents the largest ten-day start of all time. Thanks in part to its stronger midweek business; Jurassic World is running $25.16 million and 7 percent ahead of the $373.07 million ten-day take of former record holder The Avengers. Without adjusting for ticket-price inflation Jurassic World is already the 21st highest grossing film of all-time domestically. The film is on the verge of surpassing the $402.45 million unadjusted domestic lifetime gross of 1993's Jurassic Park and in the coming days will zoom past the $449.32 million current gross of Avengers: Age of Ultron to become the highest grossing release of 2014 thus far domestically. At its current rate Jurassic World shouldn't have a problem becoming only the fourth film of all-time to reach the $600 million unadjusted domestic mark (the other three films being 2009's Avatar, 1997's Titanic and The Avengers).

In a stunning box office performance of its own, Disney's Inside Out was off to a very strong estimated second place start of $91.06 million. The critically acclaimed 3D computer animated film from Pixar far exceeded expectations which had been held in check after the break-out performance of Jurassic World and tended to range anywhere from $60 million to $75 million heading into the weekend. Without adjusting for ticket price inflation, Inside Out delivered the largest opening weekend performance ever for a non-sequel from Pixar, as it easily topped the $70.47 million start of 2004's The Incredibles. Inside Out claimed the second largest opening weekend take ever for a Pixar film (including sequels); behind only the $110.31 million debut of 2010's Toy Story 3. The opening weekend for Inside Out was the seventh largest ever for the month of June without adjusting for ticket price inflation.

Inside Out was no doubt helped out by its nearly universal glowing reviews, by its unique concept in a summer especially driven by sequels, the relative lack of family and computer animated fare thus far in 2015 and by a strong marketing campaign. Inside Out opened with $34.24 million on Friday (which included an estimated $3.7 million from evening shows on Thursday), decreased 10 percent on Saturday to gross $30.87 million and is estimated to decline 16 percent on Father's Day to gross $25.95 million. That places the film's estimated opening weekend to Friday ratio at 2.66 to 1. Inside Out received a strong A rating on CinemaScore and in all likelihood will hold up very well over the next few weeks until Universal's highly anticipated Minions enters the marketplace on July 10.

Fox's Spy placed in a distant third with an estimated $10.50 million. The Melissa McCarthy led comedy stabilized nicely this weekend as it was down a very solid 33 percent from last weekend. Spy has grossed a respectable, but softer than expected $74.37 million through 17 days. That places the film an underwhelming 21 percent behind the $93.62 million 17-day gross of 2013's Identity Thief.

Warner's San Andreas also stabilized very nicely this weekend with an estimated fourth place take of $8.24 million. The Dwayne Johnson led 3D disaster film was down just 24 percent, as the film was helped by the Father's Day holiday and by rebounding from the hit it took from the launch of Jurassic World last weekend. San Andreas continues to significantly exceed expectations with a 24-day take of $132.23 million.

Dope rounded out the weekend's top five with an estimated $6.02 million start. The Rick Famuyiwa directed comedy drama from Open Road debuted just below its already modest expectations. Strong critical reviews and strong early buzz from Sundance earlier in the year were ultimately unable to transfer into any type of opening weekend break-out for Dope. The film's debut was very similar to the $6.20 million debut of Beyond the Lights last November.

Dope opened with $2.38 million on Friday (which included a significant $0.425 million from Thursday evening shows), fell 14 percent on Saturday to gross $2.04 million and is estimated to decline 22 percent on Sunday to take in $1.60 million. That gives the film a fairly front-loaded estimated opening weekend to Friday ratio of 2.53 to 1. Dope received a promising A- rating on CinemaScore and will hope to build off of its strong initial word of mouth and critical reviews going forward.

Disney reports that Pixar's Inside Out bowed to an excellent $34.238 million in first place on Friday, including Thursday's $3.7 million in early grosses as well as revenue generated from a special screening held on Tuesday night. That ranks as the second best opening day ever for the venerable animation studio, topping Monsters University's $30.5 million and trailing only Toy Story 3's $41.2 million. Pixar's first release in two years, Inside Out is benefiting from both strong advance buzz with reviews at a spectacular 98 percent on Rotten Tomatoes, as well as major demand from families with kids who haven't had an animated offering to see in theaters since Fox/DreamWorks' Home opened three months ago. Even then, Inside Out's debut is made all the more impressive considering its competition against Jurassic World.

While Inside Out will very likely concede the weekend to the dinosaur mega-blockbuster (the first time a Pixar film will debut outside of first place over opening weekend), it extends Pixar's streak of #1 debuts on opening day to 15 and is well on its way to breaking the record for biggest non-first place opening weekend by any film in history. That record currently belongs to 2004's The Day After Tomorrow ($68.7 million; which adjusts to about $90 million using 2015 ticket prices). Combined with strong word of mouth (including an "A" CinemaScore and a rare 93 percent Flixster user score) and Father's Day to boost Sunday receipts, things look very rosy for Inside Out. Disney projects an $84-89 million range for the weekend, while BoxOffice projects $90 million.

Moving down to second place for the day (but still shattering records) was Universal and Legendary's Jurassic World. The fourth entry in the beloved franchise continued its historic run on Friday with another $29 million, representing a strong hold against the new Pixar flick and dropping 65 percent from opening day last week. That gives the Colin Trevorrow-helmed sequel a new record eight-day domestic total of $325.2 million -- topping Marvel's The Avengers, which earned $299.2 million through its first eight days. The latter film also holds the second weekend record ($103.05 million), but Universal itself is already projecting World will overtake that with $103.3 million this weekend for yet another record.

Open Road's Dope bowed in fourth place with a respectable $2.38 million from 2,002 locations yesterday. The film's early word of mouth is living up to the buzz with an 86 percent Flixster score on top of its 90 percent critics' score. BoxOffice projects the flick will net around $7 million for opening weekend.

Friday Update #2: Sources tell BoxOffice that based on early results, this is how the weekend could shape up:

Friday Update #1: Disney reports this morning that Pixar's Inside Out is off to an excellent start with $3.7 million earned from Thursday evening shows beginning at 8pm. That marks the highest pre-opening day gross for a Pixar title since Toy Story 3's $4 million midnight debut on the same weekend in June 2010. By comparison, Pixar's most recent title -- Monsters University tallied $2.6 million from 8pm Thursday shows two summers ago. Last year's How to Train Your Dragon 2 from DreamWorks and Fox pulled $2 million from 8pm Thursday shows.

Inside Out's strong early performance is a great sign for the weekend ahead as families and fans turn out for the first Pixar movie in two years, the longest gap they've had between films in nearly a decade. While it should be noted that Pixar has an older fan base expected to turn out for the first shows last night, the film's stellar reviews (99 percent on Rotten Tomatoes as of Friday morning) combined with the fact that this is the first major animated movie to open since Fox/DW's Home three months ago should lead to a huge turnout this weekend. The big question mark is how that will affect -- or be affected by -- Jurassic World, which cornered the family audience as part of its massive record debut last weekend. Either way, it looks like another very busy weekend ahead at the box office.

Note: Disney reports that Inside Out received special Tuesday night screenings whose gross is not included in the reported Thursday night figure, but will be rolled in at the end of business Friday.

Meanwhile, Dope bowed to a solid $425,000 last night. Comparisons are few and far between, but the much buzzed-about pic is also riding great reviews (88 percent) into the weekend and should prove to build on its sleeper status.