UPDATED GLOBAL REPORT: 'Jurassic World' Closes in on $1 Billion Worldwide After Just 12 Days; 'Inside Out' Opens To Strong $41 Million From Early International Releases, But Behind 'Minions' Down Under 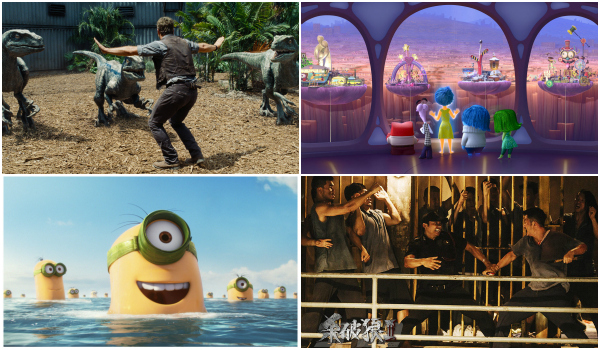 The dinosaurs of Jurassic World stampeded past the half billion mark overseas this weekend devouring $160.5 million at 18,718 dates across 66 territories for an outstanding total of $584.4 million. Combined with North America’s record-breaking run, Universal’s long awaited fourth installment in the Jurassic series is already knocking on the billion dollar door with $987.2 million in global ticket sales.

International filmgoers are flocking to IMAX screens as well, contributing $10.8 million this weekend from 446 screens and taking the overseas total to $42.1 million. Super-sized Indominus rex and the dinosaurs of Jurassic World have grossed a record $84 million globally from IMAX in just 12 days, compared to Avatar which took 23 days to reach $80 million.

Universal’s Jurassic World co-financed by Legendary Pictures will open in its final territory Japan on August 5.

Disney/Pixar’s Inside Out opened to $41.0 million from 5 major markets and 37 overseas territories, approximately 42% of its final international footprint. The film got off to an outstanding start with an estimated total of $132 million worldwide.

Russia also opened at #1 with $7.7 million, the highest opening ever for a Disney/Pixar animated release including Frozen. Australia took in $3.6 million which is on par with Big Hero 6’s opening and should have strong holds through the upcoming Winter school holiday.

In Europe, France was the only significant market to open this weekend and took in $5.2 million, just below Frozen. The Fête du Cinéma, an annual celebration of films which brings out huge audience numbers, which starts next week, as well as summer school holidays starting on July 3 will help Inside Out moving forward.

International releases will be staggered throughout the next few months to coincide with local holidays. Inside Out will open in Belgium, Hungary, New Zealand, India, and Trinidad next weekend. Other key overseas openings are South Korea (July 9), Spain (July 17), Japan (July 18), UK/Ireland (July 24), Italy (September 16), and Germany (October 1). China has no confirmed release date yet.

Universal Pictures and Illumination Entertainment’s Minions kicked-off with an estimated $12.5 million this week from 4 territories in the Asian-Pacific.  The film opened at #1 in Indonesia as the highest grossing opening weekend for an animated film and is tracking 55% ahead of Despicable Me 2. It also took the top spot in Malaysia and Singapore, where it opened 46% and 26% bigger the DM2 respectively. Minions placed behind Jurassic World in Australia. The animated film will open next weekend in Brazil, New Zealand, Czech Republic, Poland, Slovakia, and the UK/Ireland.

The Divergent Series: Insurgent bowed in China with an estimated $8.9 million for third place in a crowded holiday market this weekend. The second installment in the Divergent series has now grossed $154.74 million overseas and $284.55 million worldwide.

Mad Max: Fury Road guzzled down $5.06 million in international sales this weekend from 56 territories. The universally acclaimed action flick has grossed $202.7 million overseas and $346.52 million globally. Japan opened this weekend to an estimated $2.1 million on 660 screens to take first place in the market.

Entourage pumped its way to $2.7 million this weekend behind UK/Ireland’s $980K opening on 409 screens. Vince and his boys have disappointed domestically and overseas grossing just $9.1 million abroad and $38.43 million worldwide. France opens next week.

Insidious: Chapter 3 grossed $3.0 million from 2,170 screens across 53 territories this frame, lifting its overseas cume to $32.2 million and its global haul to $77.6 million. The horror remake opened in Argentina in fifth place with $345k on 80 screens, 69% ahead of the previous installment’s opening weekend. Thailand grossed $190k on 87 screens to take second place, while Poland earned $140k on 113 screens for the third spot in the market. Upcoming openings include Mexico (June 26), Germany (July 2), France (July 8), South Korea (July 9), Australia (July 16), and Brazil (July 30).