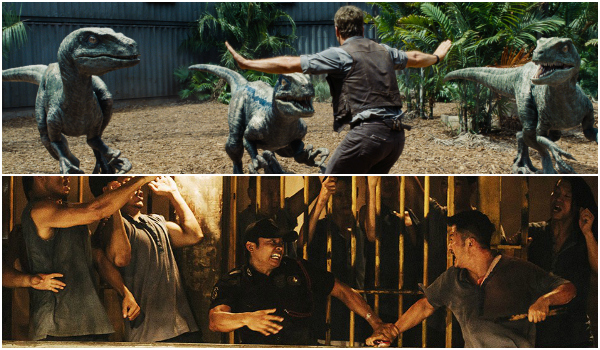 In China, as in other parts of the world, Jurassic World is proving itself to be the perfect weekend movie. Over the 4-day Dragon Boat Festival, the dinosaurs of Universal's blockbuster sequel roared to $49.1 million and a 13-day total of $175.4 million. Its 3-day weekend percentage drop was just 42% compared to opening weekend, while the film lost almost half of its screenings. Per screening attendance jumped from 51 to 61 this weekend making up the difference -- pretty impressive and indicating great word of mouth. Jurassic's nationwide average ticket price remained steady at an expensive $6.12 meaning moviegoers are favoring premium formats.

Jurassic also passed ￥1 billion in local currency this weekend, becoming the tenth movie ever to reach that milestone and also the third in 3 months (Furious 7 in April and Avengers: Age of Ultron in May). This is the first year that three imported films have grossed more than ￥1 billion (2014 saw Transformers: Age Of Extinction and domestic hits Breakup Buddies and The Monkey King); China's SARFT (State Administration of Radio Television and Film) must be very anxious for the protection period to kick in.

Speaking of successful local pics, HK/China coproduction SPLII (杀破狼2) had a strong second place finish with $39.6 million. The action film starring Thailand's Tony Jaa and Jacky Wu has grossed $50.6 million since opening on Thursday and is actually outpacing Jurassic on weekdays since the latter's audience is predominantly composed of families and younger moviegoers. SPLII looks poised to top Wolf Warriors' $87 million as this year's highest grossing local action film and signals the emergence of Jacky Wu as the Mainland's premiere action star.

In third place, The Divergent Series: Insurgent opened to an even $11.0 million. Although young adult franchises like Maze Runner and Hunger Games aren't hitting with Chinese moviegoers the same way they do with domestic ones, Insurgent's four day total nearly equals Divergent's entire run of $12.4 million last year indicating its fan base is growing.

Rounding out the top five was newcomer The Ark of Mr. Chow (少年班) performing under expectations with $5.5 million, and Hollywood holdover San Andreas, holding well on just 3% of China's screens with $5.3 million for a 20-day total of $94.1 million.

Stand By Me Doraemon ($84.9 million) passed Big Hero 6 ($84.6 million) this weekend to become the #2 highest grossing animated film in China's history. Kung Fu Panda 2 ($94.75 million) will keep its crown for the time being.

The rest of the 4-day holiday weekend top ten can be found below with data from China's EntGroup. 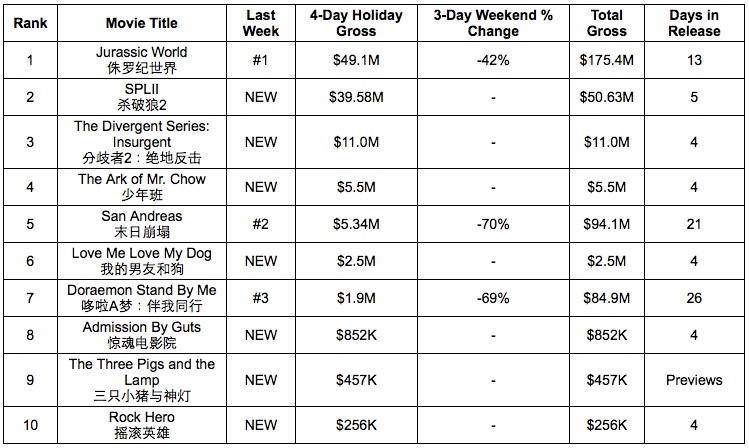