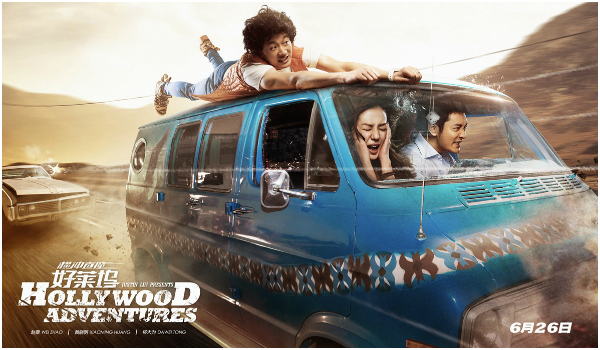 In order to maintain a healthy balance between domestic product and Hollywood fare, SARFT (The State Administration of Radio, Film, and Television) imposes an annual blackout "month" on most imported films. This weekend begins the month or more-long protection period and sees 14 new films enter cinemas.

Of the eight new domestic films, three co-productions, and three imports, Hollywood Adventures (横冲直撞好莱坞) has all the makings of a summer blockbuster. Produced by Justin Lin (Furious 3-6, Better Luck Tomorrow) and starring superstar and newly minted billionaire Vicky Zhao (赵薇), current it boys Huang Xiaoming (黄晓明) and babyfaced Tong Dawei (佟大为), this Hollywood-China coproduction has been aggressively marketed for months through publicity tours, music videos, and cast appearances. According to EntGroup's EFMT Index, Hollywood Adventures has the highest level of awareness and intent to purchase of any release this weekend. We think it could be a massive hit on the Mainland grossing upwards of $100 million a la The Breakup Guru which opened in the same frame last summer on its way to $107.83 million.

Another film getting buzz this weekend is Hear Me (听说), a lighthearted teen romance film from Taiwan starring popular performers Eddy Peng, Ivy Chen, and Michelle Chen. However, the film was released in Taiwan all the way back in 2009 which might hurt box office potential.

Begin Again starring Mark Ruffalo and Keira Knightley seems to have skirted the blackout, but its limited appeal to Chinese moviegoers is probably the reason for this unattractive release date.

Finally, Jurassic World will be losing most of its screens this weekend due to the protection period, but we still see the hot ticket in China placing in the top 3 and ending its run over $200 million.