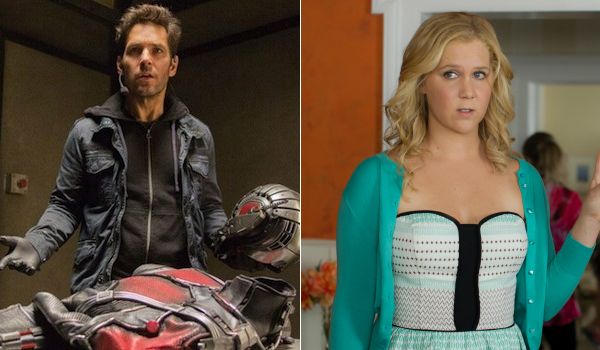 The 12th chapter of the Marvel Cinematic Universe popped up on official tracking today with the July 17 release pacing for a debut around $55-60 million. That would easily make it Paul Rudd's top opening weekend as a leading man.

At first glance, though, that seems like a soft launch considering the power of the Marvel brand name. The fact that they haven't opened a pic close to that range in four years (Thor and Captain America: The First Avenger pulled $65.7 million and $65.1 million, respectively, in Summer 2011) means interest could still improve in the weeks ahead.

Still, while last summer's Guardians of the Galaxy was considered the studio's riskiest venture to-date, Ant-Man isn't far behind in that category. The title hero is arguably the most unfamiliar-to-the-masses character among Marvel's Earth-based properties to hit the screen so far, and there's been no introduction of the character in recent Marvel pics beforehand.

Ant-Man By the Numbers

Initial tracking figures show Ant-Man's total awareness level scoring 77 percent -- identical to that of Thor: The Dark World at the same point in its marketing cycle before earning an $85.7 million frame in November 2013 (the lowest Marvel debut post-2012's Avengers). However, Ant-Man's "definite interest" score is about 25 percent lower than the Thor sequel's.

When it comes to social media, the story is much the same: Ant-Man's Twitter activity over the past week was about 52 percent softer than Guardians' at the same pre-release point, while the former's 316,000+ Facebook fans entering today represent less than half the number of last August's breakout. On the upside, Ant-Man's Flixster user anticipation is solid: over 93,000 fans have given it a 99 percent score, slightly ahead of the vote total Guardians saw three weeks out.

In fact, first tracking is more in line with Fox's The Wolverine, which also hit theaters in mid-July two years ago. Its "first choice" score of 10 percent is relatively similar to Ant-Man's 8 percent. That particular stat will naturally increase in the weeks ahead as more immediate summer tentpoles clear the way (namely Ted 2 and Terminator: Genisys as they appeal to similar core male demographics) and Disney moves into its final marketing phase.

It's also worth nothing that with families presently busy driving the enormous successes of Jurassic World and Inside Out , they probably aren't paying attention to what movies are coming out several weeks from now. That audience is a major component in any Marvel flick's box office potential.

Schumer and Apatow Look to Counter-Program with Trainwreck

Meanwhile, Universal will look to continue one of the hottest studio streaks in history as it opens Trainwreck opposite Ant-Man on the same weekend. Writer/star Amy Schumer's rise to success over the past few years, as well as director Judd Apatow's own fan base, should work to the film's advantage as ladies' night out counter-programming that hopes to play well through the final half of summer.

Initial tracking for Trainwreck shows awareness trailing last year's The Other Woman, but with "definite interest" and "first choice" scores already near the same level. That's a great sign for Schumer's leading lady debut, indicating that a final marketing push and a wave of positive reviews could help it stay on track for a $25 million (or higher) first weekend.

Look for further analysis and updated box office forecasts for both Ant-Man and Trainwreck in the weeks ahead.